Most Canadians support the concept of bringing in a universal basic income (UBI), but the majority also don’t want to pay for it.

A new study from the Angus Reid Institute found that, of the 1,510 Canadians who responded to the online survey between June 8 and 10, the majority support bringing in some form of UBI.

Something similar has already been seen during the COVID-19 pandemic, as over seven million Canadians have been supported through the Canadian Emergency Response Benefit.

The New Democratic Party’s Jagmeet Singh called for the CERB to be turned into a universal benefit in April, though the proposal was rejected by the Liberal Party, according to the Angus Reid report.

The study found that 59% of respondents supported some form of universal basic income, with just 30% opposing. 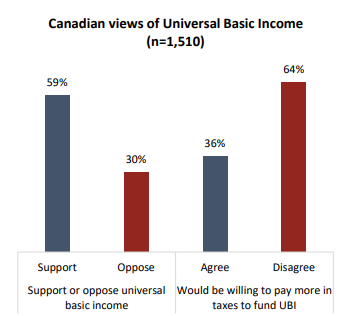 However, of that same sampling, only 36% agreed that they’d be willing to pay more in taxes to fund it, while 64% disagreed.

When broken up by region, Alberta was the only hold-out where those in opposition outnumbered those in support by a margin of 47% to 42% — all other provinces had varying degrees of majority support, though Saskatchewan/Manitoba were at just 49% in support to 37% opposed. 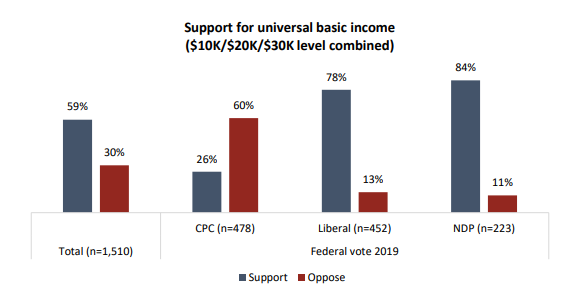 Those who had voted Conservative in the past federal election were far more likely to be opposed to the concept than those who voted Liberal or NDP, with 60% of Conservative voters opposed compared to just 13% for Liberals and 11% for the NDP voters.

As for where the money for universal basic income should be coming from, 61% believed that the wealthy should pay more in taxes to support some type of guaranteed income, with 39% opposed.

Unsurprisingly, those making over $150,000 a year were the least likely to be onboard with paying more in taxes to support UBI, and those making under $25,000 were the only group where a majority stated that they’d be willing to see higher taxes to make it happen.

All ages and genders represented in the study supported a universal basic income, though men aged 35 and up were most opposed.