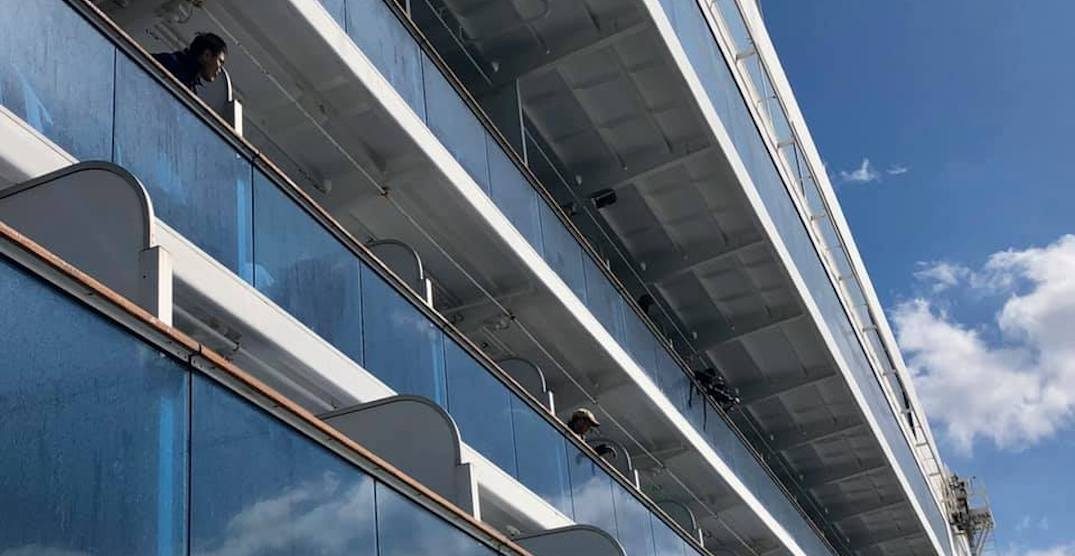 Passengers on their balconies on the Diamond Princess, David Abel / Facebook

Two Canadians are among those who have tested positive for coronavirus aboard the Diamond Princess cruise ship, which is currently quarantined near Japan.

According to a statement from Princess Cruises, the second set of samples were completed, confirming 10 additional cases of the virus on the ship.

The statement from the cruise ship company said that the guests disembark and are transported to local hospitals “immediately.”

The Japanese Ministry of Health, which is conducting the tests, said that 20 out of 102 cases were positive as of Thursday local time.

“The cruise ship ‘Diamond Princess,’ which arrived at Yokohama Port on February 3, is undergoing quarantine at sea. As coronavirus positivity was confirmed, we will carry it to a medical institution in Kanagawa today,” said the Japanese Ministry of Health in a statement. “Positive cases were confirmed in 20 out of 102 people yesterday.”

They also said that those include elderly people and foreign nationals.

On Wednesday, Princess Cruises said 251 Canadians are onboard the Diamond Princess.

At the time, 10 people had tested positive for the virus.

“It has been confirmed that the ship will remain under quarantine in Yokohama. The length of the quarantine will be at least 14 days as required by the Ministry of Health,” said the company.

Princess Cruises said the ship plans to go out to sea “to perform normal marine operations including, but not limited to, the production of fresh water and ballast operations before proceeding alongside in Yokohama where food, provisions, and other supplies will be brought on board.”

Complimentary internet and telephone use has been provided to guests to contact family and friends.

One of the guests on board is David Abel, who has been sharing his experience on the ship since the quarantine.

“Passengers with inside cabins are now allowed to walk on the deck for 1.5 hours under the supervision of the Quarantine officers,” Abel said in his latest post. “They must stay 1 metre apart from one another and not make contact or congregate in groups.”

Princess Cruises said that it will be cancelling the next two Diamond Princess cruises departing Yokohama on February 4 and February 12.

There are 2,666 guests and 1,045 crew currently onboard covering a range of nationalities, and Princess Cruises confirmed that approximately half the guests onboard are from Japan.