With Canada’s federal election only weeks away, current poll projections show that the race is extremely close.

As of Sunday, Sept. 27, the latest Nanos Research poll conducted for CTV News and The Globe and Mail indicate that the Liberals are in a slight lead at 32.5 per cent, the Conservatives trail close behind at 31.5 per cent, the NDP sits at third with 27.6 per cent, and the Green party has 3.7 per cent support nationally. The margin of error in the poll is reported at ±3.0 per cent.

Every vote counts, and in this election that may be more true than ever. When looking at voter turnout, there is one specific group of Canadians who can make an enormous impact on results but have the lowest turnout rate.

According to Elections Canada, young Canadians ages 18 to 24 are usually absent at the polls on Election Day. And this is not a new trend. For the previous four elections (held in 2004, 2006, 2008 and 2011), statistics indicate that young Canadians within the 18 to 24 age bracket have the lowest voter turnout in comparison to voters ages 35 and up. 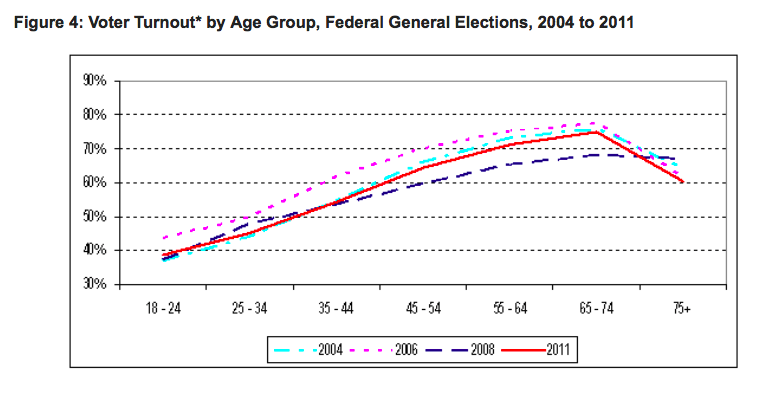 Looking at the 2011 election more closely, 61.1 per cent of Canadians voted, according Elections Canada. This data is calculated by dividing the number of votes cast by the number of registered voters. Only 38.8 per cent of young Canadians ages 18 to 24 voted.

In comparison, 75.1 per cent of Canadians ages 65-72 showed up to the polls. This stark difference in voter turnout between the nation’s oldest and youngest Canadians highlights how youth appear to be uninterested in exercising their democratic right to vote. 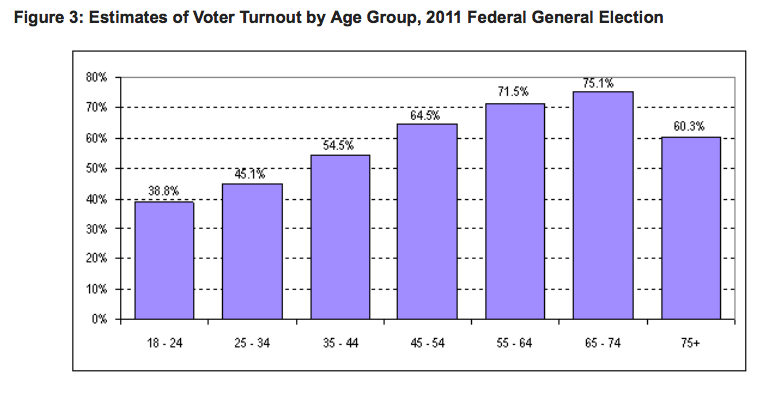 Younger people are often perceived as apathetic when it comes to engaging in federal politics.

Undoubtedly, some youth probably do feel that their one vote doesn’t make a difference when it comes to choosing the leader of their country.

But the blame for political disengagement often falls on youth and not enough responsibility is placed on the parties or their leaders to get young Canadians excited about participating in the nation’s most important and monumental political decision in years.

Frances Ramsay, a second year Environmental Science student at the University of British Columbia, is looking forward to casting her vote for the first time. She is involved with political initiatives on campus but she agrees that political leaders and parties are not doing enough to engage younger Canadians.

“I think they aren’t reaching out enough to youth and they should do more because youth are actually more engaged than a lot of people think… youth are more likely to attend a protests, to come out and volunteer for political issues and it’s a shame that our voter turn out is so low. I think that’s directly a fault of the parties not reaching out to youth,“ Ramsay told Vancity Buzz.

“I think voting is really, really important to keep our democratic system and it actually makes me really sad that more people are not engaged in the voting process,” she said.

During this election campaign, party leaders have touched on a few issues that impact young Canadians.

Both Tom Mulcair and Justin Trudeau have introduced strategies to create jobs for young people.

Mulcair says he will put aside $200 million over the next four years to create more jobs for young Canadians. Trudeau has vowed $300 million per year for the next three years to go towards a national youth employment plan.

The Green Party’s Elizabeth May promised that she would create a tuition free education plan for Canadian students by the year 2020.

Stephen Harper’s platform does not directly address issues impacting young Canadians. But he is stressing that he will make the economy and job creation a priority – something could matter to many youth and how they are planning for their futures.

Although leaders bring up a few matters that impact young people, their focus gravitates more to middle age and older Canadians because they are the ones who show up to vote.

As a result, the interests and opinions of young Canadians remain overlooked on a national level, creating a disconnect between them and voting.

Although younger Canadians may not feel like a priority to federal party leaders, Camcastle stresses the crucial role they play in the election.

“Youth voter turnout is important because it could change the results of an election if younger people favour a different party, for example, parties more to the left of the political spectrum, from those who are older,” she said.

And when young people do come out and vote, it sends a strong message to party leaders about the issues that matter to future generations.

“[Youth voter turnout] could encourage political parties to consider other issues in more depth that currently tend to be sidelined, such as the environment and post-secondary education,” Camcastle said.

There are many organizations that are working to engage with young Canadians and educate them about why their vote matters. These outside groups often have the most impact on reaching out to youth through their online and social media presence.

“This is the most important election in a generation. It’s also going to be extremely close. Every vote will make a difference. That’s the message we’re going to share directly with tens of thousands of youth across British Columbia in the coming weeks,” said Simka Marshall, Chairperson of the Canadian Federation of Students – BC (CFS-BC).

To help first time voters and youth get out and vote this October, the CFS-BC has created this simple Commit To Vote tool, which will connect thousands of students who want to make a difference in this election.

They are also encouraging youth to share their involvement on social media using the hashtag #ImVoting.

It’s never too late to start caring about the upcoming election. The most helpful way to begin is by looking at the party platforms and doing some research online to find out more about the candidates and their positions on the issues you care about.

Campus is also a great place where students can find resources and outreach groups that encourage youth political engagement. Connecting with like-minded young people definitely helps navigate through the confusing and overwhelming terrain of Canadian politics.

Try to tune in to the televised debates. Although they can turn into a shouting match, they serve as a good way to see candidates together, discussing their stance on the most pressing issues that matter to Canadians. The next televised debate is scheduled for today, Monday, Sept. 28, at 4 p.m. PST.

If the televised debated are leaving you unsatisfied, try heading out to the candidates debates in your local riding. It’s important to know who the candidates are and how they will make sure the issues that matter to you will be addressed in Ottawa, if they are voted as your MP.

A little bit of effort and research can go a long way in ensuring you make an informed decision when casting your ballot.

Party leaders may not make the youth vote a priority but political engagement is a two-way street and youth cannot sit back and expect political change if they do not take initiative.

Young Canadians must understand their vote is extremely necessary and important. Youth have the power to shift political attention to issues that matter the most for Canada’s future, but they can only do so if they show up to the polls on Oct. 19.