We are eating in a post-Atkins era of “Meatless Mondays” and plant-based diets. Yet on menus across the nation are mile-high burgers and charcuterie boards, and independent butcher shops are coming back into style, and consumers are using terms like “grass fed” and “sustainable” when buying their meat.

Is it a matter of eating less meat, eating better meat, or both? Food enthusiasts have veered towards going whole hog at the meat counter, and restaurants are putting the farmers’ names right on the menu. Suddenly diners have a whole new relationship with our meat.

Sebastian Cortez is a Chilean-born former professional chef who opened a butcher shop in West Vancouver’s Dundarave Village in 2007. Cortez calls his store a “throw-back to the old fashioned butcher shop, where the butcher was part of the community – somebody you relied upon to get you the best cuts of meat, or to help you choose the most appropriate cut for a given recipe.” 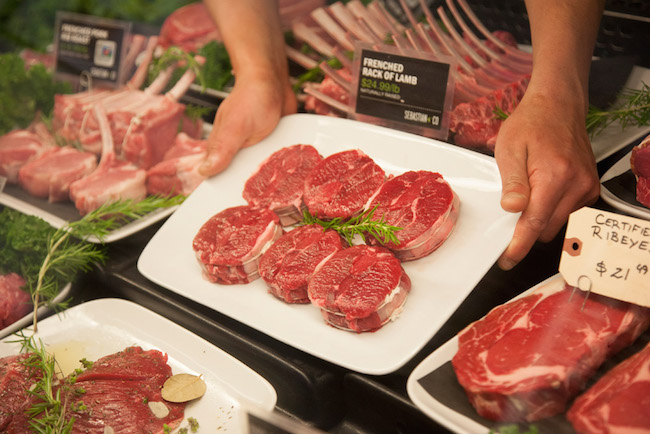 Cortez believes that quality trumps quantity when it comes to the meat we eat. “We as humans aren’t meant to eat such huge quantities of meat, and we’d all be better served if we ate smaller quantities of better quality, more ethically and sustainably produced meat,” explains Cortez.

Over at Oyama Sausage Co., whose cases full of meat and cheese are ogled, shopped from, and photographed by the hordes of locals and tourists who flock to the public market at Granville Island, owner John van der Lieck says while he likes a big piece of meat every now and then, it needs to be good meat, and not every day.

“The thing that I don`t like is turning meat into a cheap food – constantly reducing its quality and neglecting the welfare of the animals. That has to stop. In my Grandfather`s day, a chicken soup or a roast chicken was a Sunday or once in a while treat. Now commercial meat has to be cheap and ubiquitous, just like farmed salmon. That is meat not worth eating. It does not even taste right.”

Van der Lieck is a fifth generation charcuterie crafstman, and takes great care to work with farmers to craft the delicious products that end up on customers’ tables, which has brought him a loyal following and tremendous respect in the Vancouver food community. 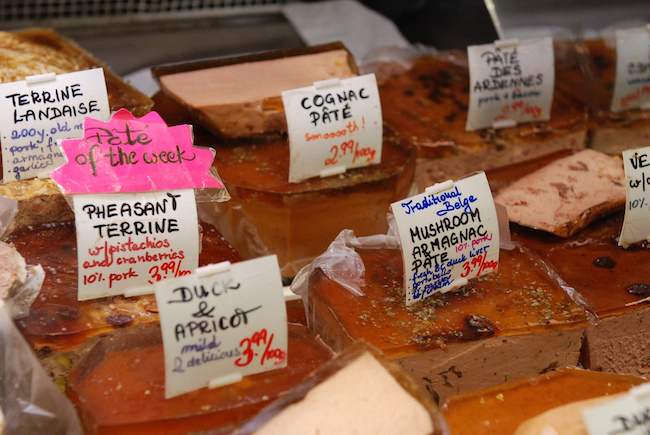 At Cortez’ shop, the meat-man says his clients are coming to him with a refreshing “less is more” perspective: “We often have customers comment that when they eat meat, they prefer to eat a smaller amount of good quality meat, which is why they shop with us.”

Chef Jesse Grasso is behind the stoves at Toronto’s Black Hoof, which describes its own menu as “meat and off-cut centric.” Grasso says the choice to eat meat or not is solely at the individual’s discretion, but chefs do have an important influence.

“I think it’s just important for us to educate people on where the meat is coming from, how it’s raised, the fact that we’re using as many cuts as possible,” elaborates Grasso.

Restaurants are adapting to the customers’ call for smaller portions of higher-quality meats in other ways, too. Chef Jessica Pelland, who has been at Calgary’s CHARCUT and will open Charbar for owners Connie DeSouza and NAME TK, explains how their “roast house” restaurant is helping meat lovers make more savvy choice. “At CHARCUT we offer that choice as you can order meat by the oz. It allows certain guests to enjoy a smaller portion while others opt for a family style offering to be shared.”

For the new restaurant endeavour, Charbar, Pelland promises a diverse menu that’s about half vegetarian, offering ultra dry-aged beef and sustainable seafood. These kinds of industry-wide changes could have a powerful impact on our food system, according to Cortez. “If we make a change towards eating smaller quantities, perhaps smaller producers will be able to compete with the big mass production plants – and better quality meat will become more universally available,” posits the butcher.

Van der Lieck would welcome such a shift. “Canada is the second largest country in the world, but we produce very little free range meat. I vote for a big change,” he adds.

Know your chicken (and your beef, and pork, and…)

When not dining out, Canadian consumers may be moving away from supermarkets and back into traditional butcher shops. For CHARCUT owner DeSousa, this is tremendously empower for home cooks. Breaking down your own meat puts the cook “in complete control of the outcome,” says DeSousa, adding: “If you are buying from a reputable natural source and you are the one breaking down the meat, you will notice the considerable difference in the quality of the end result.” 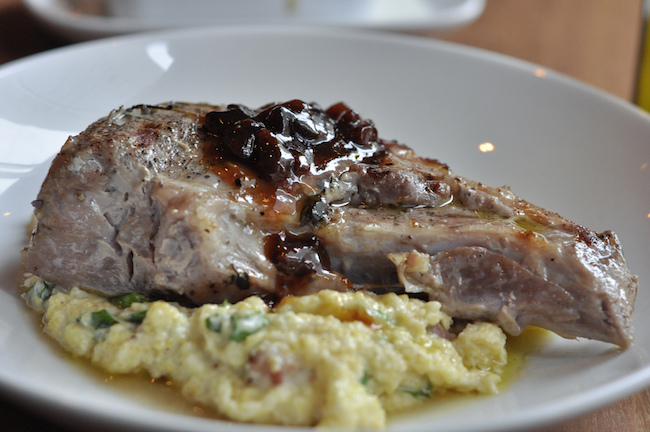 Pork Chop at Charcut and Calgary (Photo by Margaret Bourne/Flickr)

Grasso also feels like the butcher, or the art of butchery, is another component of upping the consumer’s education about meat.

“It’s not just learning about cuts, but once you’ve been doing it for a while, you can actually tell the difference between awesome, naturally raised meat, and factory meat. Just by the feel and look. and at the end of the day, knowing that a small piece of meat that you’re cooking started huge–and you de-boned it, skinned it, cleaned, and portioned it–is much more satisfying,” notes Grasso.

A good starting point would be to master breaking down a chicken, according to Cortez:

A must-know butchery basic is how to portion a whole chicken into wings, breasts, legs, and thighs (and the bones can be used for broth). That way, you can go to a local farm and buy one or two cases of chicken, portion it all up at home (or even quarter it), and then freeze it. You can save a lot of money this way, plus you know exactly where your chicken has come from. And best of all, you’ll get a sense of satisfaction knowing you butchered your own food!

Van der Lieck often teaches classes on making charcuterie and working with meat, and he hopes home cooks can learn to not get lost in the vast food universe, trust their senses, and

Return to your roots before you lose yourself in the vast food universe. Learn to trust your senses and have the confidence to turn failed food projects into tasty surprises. It`s a lot easier than you think but also – boy, are there a lot of ways of doing the same thing!

On the other side of the counter, Cortez and his staff make sure to help customers get the best results at home by giving them details about the meat and how to prepare it.

“We always take the time to explain where certain cuts come from, and why specific cooking techniques are best suited for particular muscles. For example, hard-working muscles require long, slow cooking, whereas muscles not used in physical labour, such as tenderloin, can be cooked quickly over high heat,” explains Cortez. 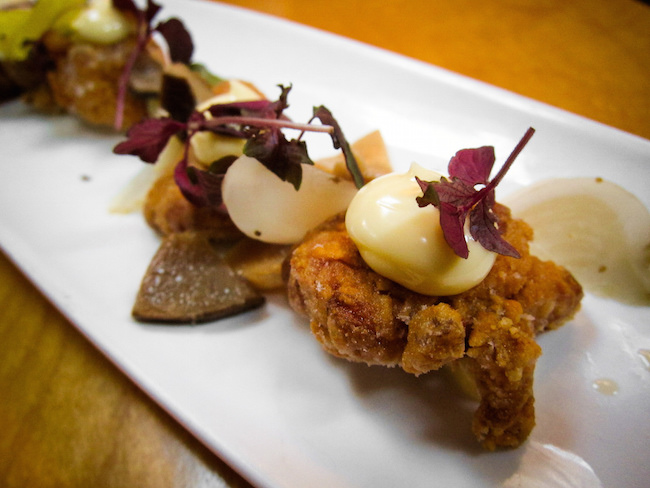 This increased consumer awareness means there are more options, says Grasso. “People are starting to understand the value of cuts, other than the popular ones, and you actually start to see things like beef heart, and sweetbreads at normal butcher shops. Anything that keeps people learning is awesome.”

Of course, some things will always be in style, like bacon, which is still enjoying a rousing popularity, and one van der Lieck hopes never fades. “I think tofu is on its way out – bacon – never!” he jokes.

We asked the meat experts about what trends are on the horizon for meat, and what cuts they’re enjoying lately.

Jesse Grasso
I’m super into pigs ears lately, braised and then served cold. Everyone fries them after braising, but I think they have way more character this way.

Sebastian Cortez
My favourite cut is definitely the Vacio. This is a cut that I discovered on a trip to see my family in Chile, and then introduced to the local Toronto scene when I was a butcher there. It has since caught on and has popped up on restaurant menus around Vancouver and Toronto. The best way to describe it is a cross between flank and skirt steak, with little ribbons of fat running through it for great flavour. But my favourite thing about Vacio is the texture. For me, meat is not only about flavour, but discovering all the different and interesting textures. The Vacio is a steak that you want to cook very slowly over charcoal, serve it rare or medium rare and sliced on the bias.

John van der Lieck
All game meats are on top of my list. Very lean – lots of flavor and truly Canadian. Try some elk or bison. I am not sure I can convince people for my other choice –I like fatty, pastured pork! Only butter tastes that good!

Jessica Pelland
Dry Aging is on the rise and I predict the umami of dry-aged beef and the incredible nutty-sweet flavour from the fat and will be a growing trend.

Cortez, DeSousa, Grasso, Pelland, and van der Lieck are all participating in the expanded events of the EAT! Vancouver Food + Cooking Festival; Van der Lieck and Cortez will be facilitating meat-centric hands-on workshops, while DeSousa, Grasso, and Pelland are among the guest chefs visiting Vancouver restaurants in the festival’s exciting Dinner Series.