By 1:11 p.m. today on January 2, the first official working day of the year, Canada’s 100 highest paid CEOs have already pocketed $46,634 — what it takes most Canadians an entire year, working full-time, to earn.

CEO vs. Average Pay in Canada

Five years after a global recession knocked the wind out of Canada’s labour market, throwing tens of thousands of workers onto the unemployment line  and sidelining a generation of young workers, the compensation of Canada’s CEO elite continues to sail along.

When you add up their total compensation, base salary, cash bonuses, grants of company shares, stock options, other compensation and pension compensation value in- crease, you get an average of $7.96-million.

That would be enough to wipe out the budgetary deficits of any one of the following provinces: Saskatchewan, Manitoba, Newfoundland and Labrador, New Brunswick, Nova Scotia or Prince Edward Island.

How does that compare with the rest of Canadians? In 2012, Canadians working full-time, full-year for the average weekly wage earned $46,634. To put that in context, the average wage in Canada increased by 6 per cent between 1998 and 2012 while the average compensation of Canada’s highest paid 100 CEOs increased by 73 per cent during that same time period (inflation- adjusted).

Here’s how the stark gap between Canada’s 100 highest ranked CEOs and the rest of us plays out in real time: Just as most Canadians are wrapping up lunch break on the first official work day of the year — 1:11 p.m. on January 2 — the average of the 100 highest paid CEOs will have already pocketed what it takes the average Canadian an entire year to earn. All in a day’s work. 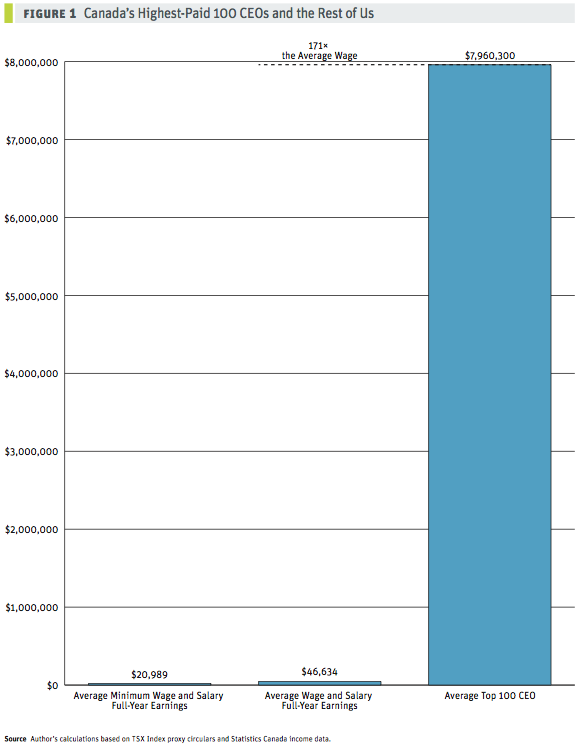 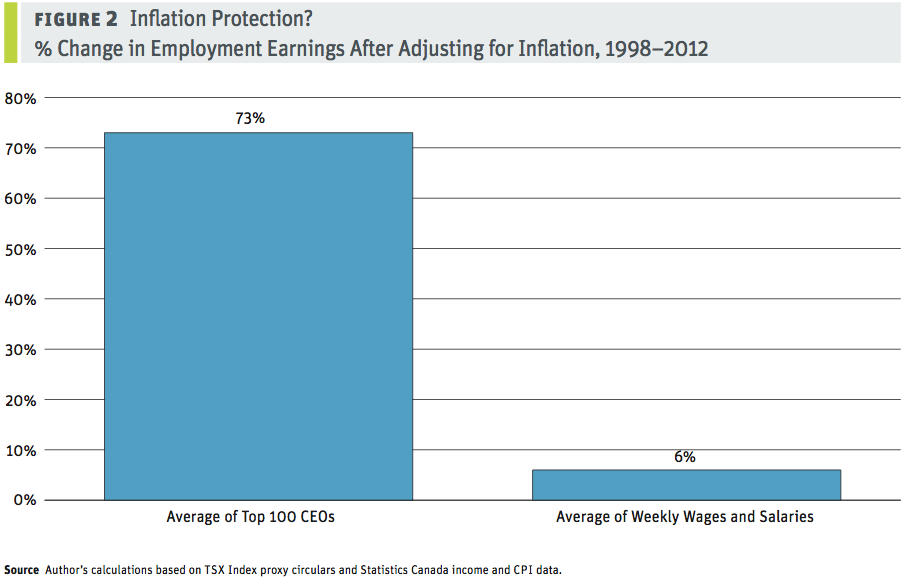 In 2011, a lucrative exit package paid by the company he built, Magna Inter- national, put self-made billionaire Frank Stronach on top of the list. In 2012, a new figure topped the list: E. Hunter Harrison, CEO of Canadian Pacific Rail- way, with a total compensation package of $49.5 million1 — leagues ahead of the second runner-up James C. Smith, CEO of Thomson-Reuters, whose compensation totaled $18.8 million.

One notable development is that there are now three women on Canada’s highest paid 100 list: Linda Hasenfratz, CEO of Linamar Corp., Dawn Farrell, CEO of TransAlta Corp., and Nancy Southern, CEO of ATCO Ltd. The previous year there was only one woman. 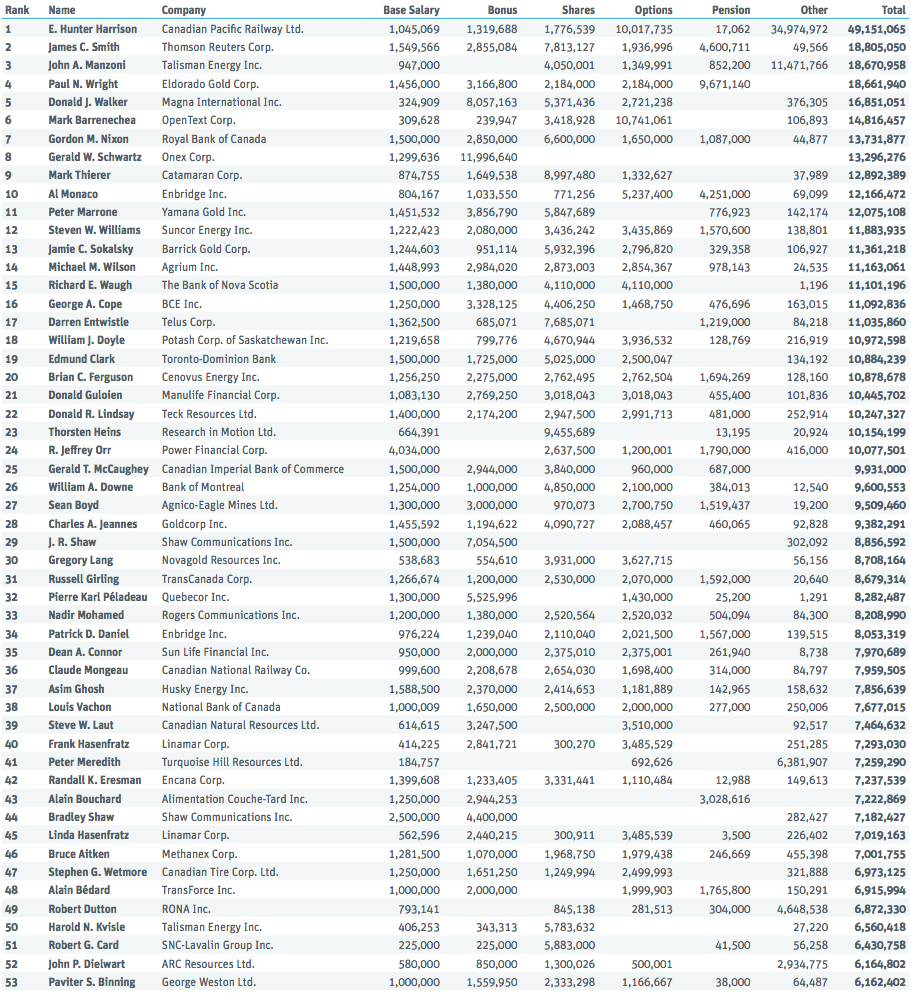 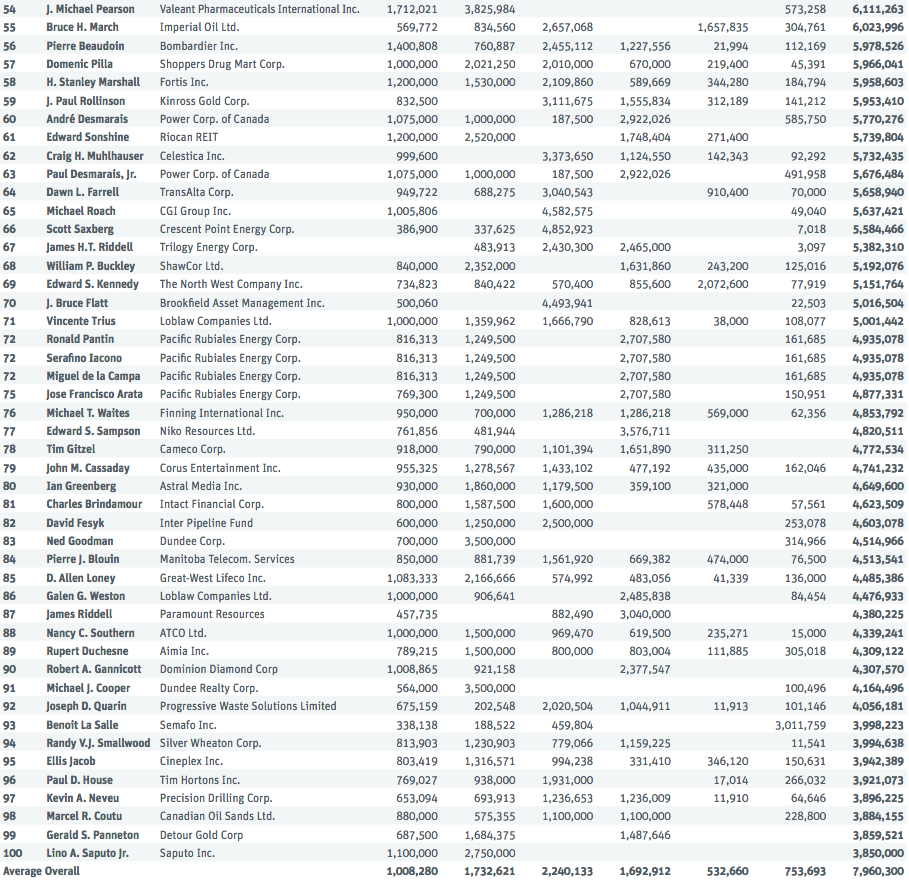 The Canadian Centre for Policy Alternatives’ annual CEO pay review, by economist and CCPA Research Associate Hugh Mackenzie, takes a snapshot of the 240 publicly listed Canadian corporations on the TSX Index, ranks the highest paid 100 CEOs on that list, and determines their average total compensation.