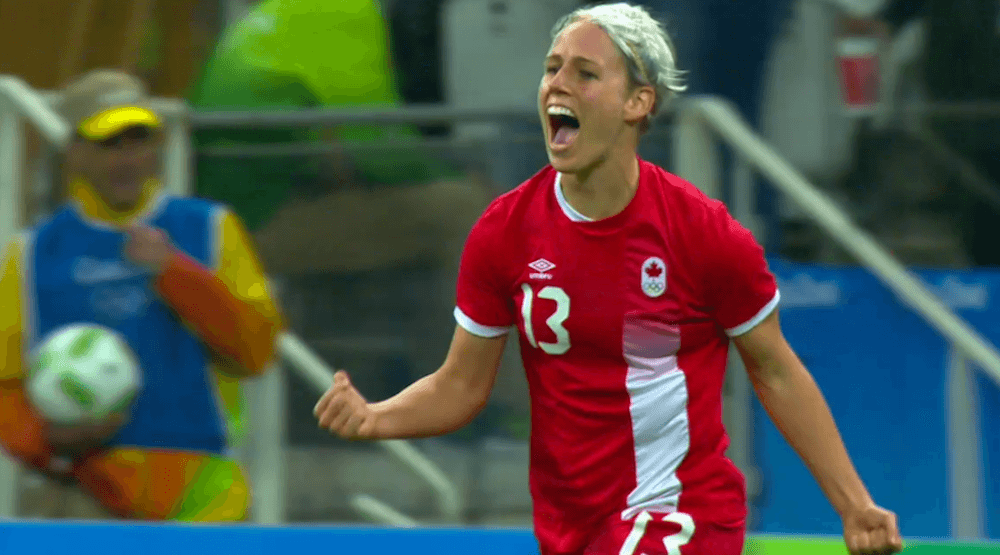 Canada has defeated France 1-0 in the quarter-final of the Rio 2016 Olympic soccer tournament, just as they did in the bronze medal game four years ago in London.

This game didn’t start off well for Canada, as they were the second best team in the first half. They were also fortunate to not give up a penalty when Canadian defender Kadeisha Buchanan took down a French player in the box in the 10th minute.

Neither team had a glorious chance on goal in Sao Paulo, and the game remained scoreless after 45 minutes, but not before defender Allysha Chapman left the game due to injury. Her replacement Josee Belanger, ended up getting a yellow card and will miss the next game.

The second half was when Canada really began to click offensively.

In the 56th minute, 21-year-old Janine Beckie showed some creativity at the offensive end, lobbing a ball over her opponent and sending a great ball into the box. Abbotsford’s Sophie Schmidt converted on a perfect header to give Canada the lead.

Sophie Schmidt gives #CAN a 1-0 lead in the 55th minute against #FRA. Beckie with the assist https://t.co/1rEInTl0nj

Just three minutes later, captain Christine Sinclair nearly scored an own goal while attempting to head a French free kick out of play.

#CAN Sinclair almost scores own goal and gives #FRA a gift, but the crossbar saves her https://t.co/ad0CLo2f9n

Canada had some chances following the Schmidt goal, but eventually settled in to a well-organized defensive shell against the #3-ranked French team.

While there were a few nervous moments, Canadian goalkeeper Stephanie Labbe only needed to be solid, not spectacular to hold on for the clean sheet.

Canada did not need Sinclair to be spectacular for them either, which is a great sign for this group. A number of very young players are making a difference for this team, which is the biggest change from a year ago at the World Cup.

Canada improves their record to 4-0, the only perfect record remaining in the tournament after the United States were upset against Sweden earlier in the day. They have defeated the #2, #3, and #5 ranked teams in the world in what has been a terrific run for this group.

Canada is guaranteed to play for a medal, with the colour to be determined after their semi-final game. Their opponent in the semis will be Germany at 12 pm PT (3 pm ET) on Tuesday.

#CAN defeats #FRA 1-0 to advance to the soccer semifinals, where they will meet Germany on Tuesday #Rio2016 https://t.co/e4eutSh7dm