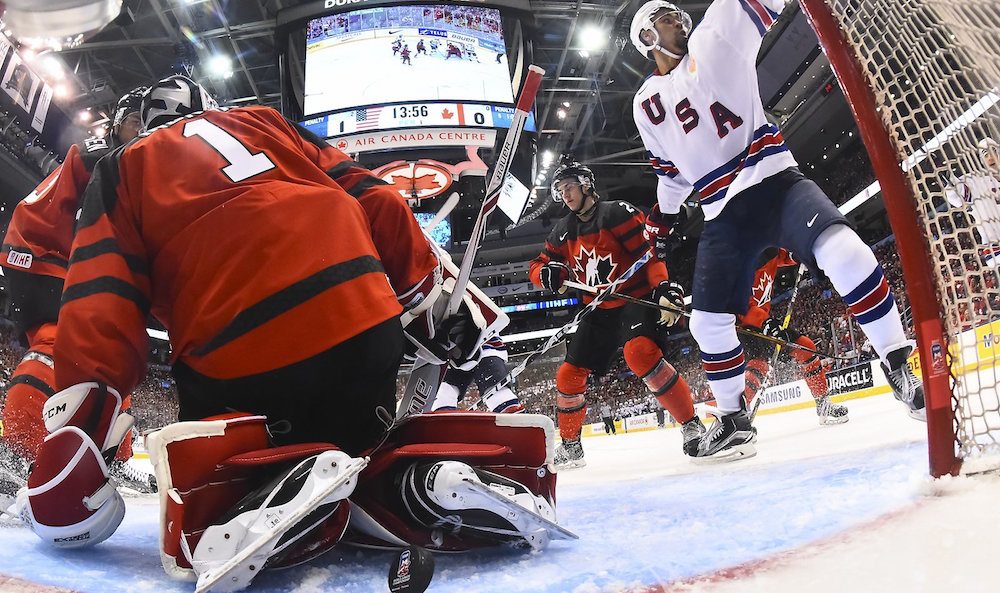 Team USA upset Canada at the World Juniors in Toronto on Saturday afternoon, defeating the favoured Canadians 3-1 in the final game of the round robin.

The win secures top spot in Group B for the 4-0 Americans, while Canada (3-1), finishes second.

The loss snaps an 11-game home winning streak for Canada at the World Juniors. The win for the Americans snaps a six-game losing streak they had against Canada on New Year’s Eve games.

Connor Ingram got the start in goal for Canada, taking over from the assumed starter, Carter Hart who let in three goals against Russia, and two versus Latvia. Ingram had been tested only once, but barely, facing just six shots in his only start against Slovakia.

Ingram gave up three goals, including two early on, although you could only really fault him (partially) on the second American goal. He made a number of big saves late in the game, which should give the coaching staff confidence to start him going forward.

Canada carried a sizzling hot power play into this game, but it was Team USA that took advantage of their opportunities in the first period.

Colin White scored at 4:31 and Jordan Greenway made it 2-0 at 6:04 for the Americans, who converted on both of their power plays.

Jordan Greenway makes it 2-0 for #USAWJC before #TeamCanada can even get a shot on goal. #WorldJuniors pic.twitter.com/MiKeG6KsDo

That seemed to rattle Canada, who only generated four shots on goal in the opening period. Canada began bodychecking with more frequency, which didn’t seem to affect the Americans’ momentum.

Canada, meanwhile, went 0-3 with the man advantage in the first period, including a 47-second two-man advantage.

Briefly getting momentum back

Canada got a huge opportunity, once again, on the power play.

Canada struggled once again on the power play, but got a lifeline when Charlie McAvoy tripped up Tyson Jost, giving the Canadians a two-man advantage for 1:48.

This time Canada converted, when a bouncing puck found Thomas Chabot at the point, who scored to cut Team USA’s lead in half.

Canada took the momentum and outplayed USA for the next few minutes. Colin White made a game saving shot block on Dylan Strome, who looked to have an open net.

Instead of the game being levelled at two, the Americans kept the lead and got an insurance marker from Jeremy Bracco, who scored on a rebound for the Americans against the run of play.

The US nearly took a three-goal lead at the end of the second and early in the third, getting two breakaways that Ingram stopped to give his team a chance.

Offsetting too many men on the ice penalties

We may have witnessed hockey history late in the game, as both Canada and USA were called for too many men, on the same play. I’ve watched a lot of hockey in my life, and I’ve never seen that before. We may never see it again.

Double too many men calls.. this is one of the most bizarre things I've ever seen. #WJC2017 pic.twitter.com/8Oy6T5FUBB

For the record, I’m not sure that either team was guilty of too many men on that sequence.

With the win, Team USA claims top spot in Group B, while Canada finishes second. Canada will play the #3 team from Group A in the quarterfinal on Monday, which will be either Switzerland or the Czech Republic.

We may begin to find out if this was just the wake up call Canada needed, or a sign of bad things to come.

HIGHLIGHTS: Watch Team @USAHockey winning the game vs. @HC_Men and the #WorldJuniors group in Toronto. pic.twitter.com/GMLChKDP5w