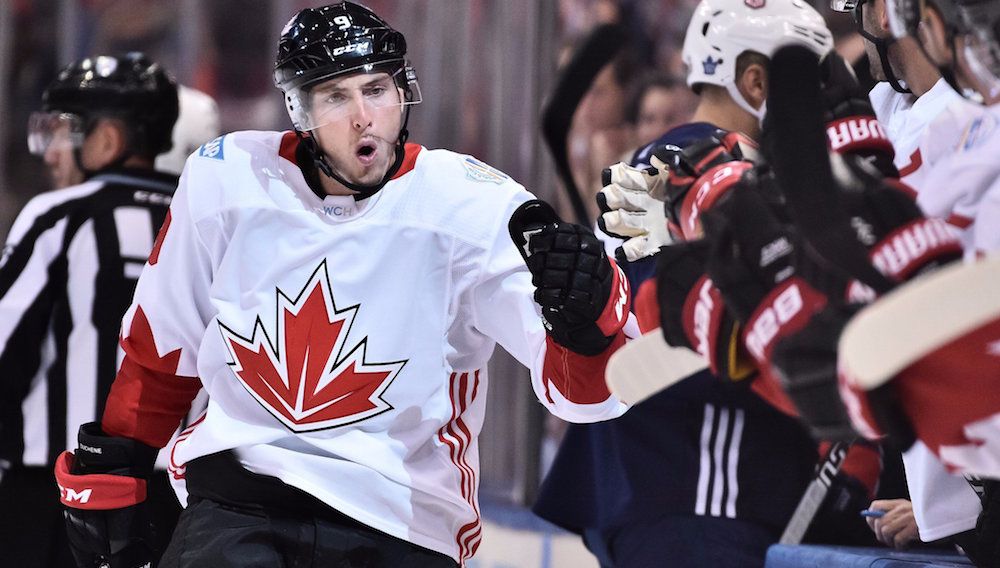 Canada booked their ticket into the semi-final and sent the Americans packing on Tuesday, with a 4-2 win at the World Cup of Hockey.

The US scored the opening goal 4:22 into the first period, the first goal that Canada had given up in four games in best-on-best hockey, dating back to the 2014 Olympics. The lead lasted a minute and 29 seconds before Matt Duchene tied the game up. Fourteen seconds later, Corey Perry scored a goal off his hip and six minutes after that Duchene scored his second of the game, this time on a beautiful move going five-hole on Jonathan Quick.

Canada held a 3-1 lead after the first period, and made it 4-1 in the second on a goal by Patrice Bergeron to put the game out of reach.

USA put forth a good effort in the third period, scoring once and hitting three posts, but the result of this game was never in doubt. Canada moves on to the semis, while the United States are eliminated from the tournament.

1. Don’t score on Canada, it’ll only make them mad.

The last goal Canada had given up in best-on-best play was against Latvia on a trick play in the quarter-final at the Sochi 2014 Olympics. Since then, Canada shut out USA in the semis, Sweden in the final, and the Czech Republic in the opening game of the World Cup.

Ryan McDonagh’s goal to open this game appeared to wake them up, and piss them off. They wasted no time tying the game, taking the lead and adding an insurance marker.

2. Go to the net, good things will happen

That was the theme on this evening. Three of Canada’s four goals came with the goal scorer going to the front of the net and standing in the crease when the puck went in the net. Two of their goals came from a lucky bounce.

When you go to the net, good things are bound to happen and that’s what happened tonight.

Canada’s embarrassment of riches is evident with their fourth line, if you can call it that. The line of Ryan O’Reilly, Joe Thornton, and Matt Duchene would be a first line on many teams in this tournament.

With two goals in the game, Duchene was named the team’s first star.

Just sitting around the house tonight w my dog. Felt like I should be doing something important, but couldn't put my finger on it.

Phil Kessel did everything but tweet out the kermit-sipping-tea meme after this one. To not select the American sniper for Team USA was clearly a misstep, and a quick exit from the tournament will only serve to magnify that.

Head coach John Tortorella was asked post-game if he would, in hindsight, change the makeup of his roster. His answer: “no.”

Another misstep? Picking John Tortorella as your head coach.

The Americans were eliminated from the tournament today, but it’s the game against Team Europe that they should regret. If they came out with the same kind of emotion against Europe on Saturday as they did against Canada on Tuesday, they’d be in great position to qualify for the semi-final. They looked like a team that wasn’t ready to play and/or didn’t realize the magnitude of the game.

Instead, in a tournament where every game matters, they’re two-and-done.

This may have been the last run for this core group that nearly won gold at the 2010 Olympics. The motto for the team coming into the tournament was “it’s time”.

A dejected Ryan Suter summed it up best: “You come into this not knowing how many chances you’re going to get, and to be out after two games is extremely disappointing.”

5. Can anyone beat Canada?

Can anyone beat Canada? Sure doesn’t look like it.

Team Canada looks as unbeatable as they ever have. They’re so good, they’re making it boring. And that’s a compliment.

“We just come to the event, we prepare for the games, we try to get better every day, and we try to win in the end,” said head coach Mike Babcock. “And being Canadian, you’re greedy. You think it’s your right to find a way to get ‘er done.”

They’re a team that doesn’t give up much defensively, and when they do falter, they’ve got the best goalie in the world to save the day.

There are no guarantees, and if Canada starts thinking like the rest of us they could be in trouble, but I don’t see it happening. They’re a four-line juggernaut that is well disciplined and good in all three zones. How does anyone compete with that?

Canada plays once again on Wednesday, with no rest, against Team Europe. With both teams having already booked their place in the semi-final, this game will decide first place in Group A.

Babcock said in his press conference that Corey Crawford will start in goal, and the players that did not play today – Claude Giroux and Jake Muzzin – will play if healthy.

Canada’s semi-final opponent is yet to be determined, with all teams in Group B – Sweden, Russia, Finland, North America – all still in it.