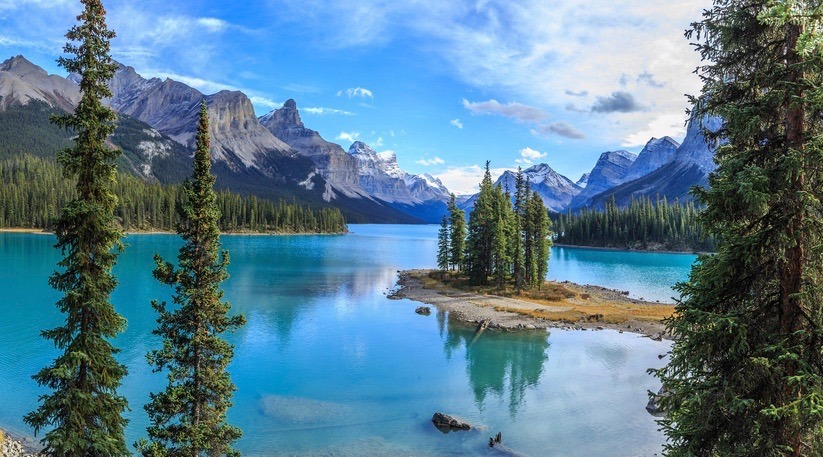 With Canada’s 150th birthday quickly approaching, there’s no better time to get outside and start exploring our beautiful home and native land.

But rather than hitting up the predictable, touristy sites and attractions, why not venture off the beaten path and visit one of Canada’s 18 UNESCO World Heritage sites.

Renowned around the globe, these cultural and natural heritage sites are must-see gems recognized by the United Nations as worthy of international conservation and need to be on the top of your Canadian travel bucket lists.

Located in the town of Fort MacLeod (Alberta), Head-Smashed-In Buffalo Jump is home to the remains of an aboriginal camp, marked trails and where large quantities of buffalo skeletons can be found. The reason this park got its’s unique name is from an old hunting tactic the aboriginals would use, which included chasing buffalos over the rocky cliffs, where we’re sure you can put together what happened next.

For those interested in stepping back in time, the Historic District of Old Quebéc, or Old Quebéc, needs to be at the top of your travel list. This picturesque town was built in the 17th century and is the closest place to Europe as you can get in Canada. Complete with narrow cobblestone streets, 17th- and 18th-century houses, manicured squares and sidewalk cafes,  you won’t find anything else like Old Quebéc in North America.

The Landscape Grand Pré in Nova Scotia is a marshland that actually helped to shape current day farming using dirt, dykes and a little creativity, transforming thousands of acres of tidal salt marshes into fertile farmland. Here you can stroll the dykes and monuments of Grand Pré, the birthplace of Acadian culture, and take in miles upon miles of picturesque farmland and sea.

Located at the tip of the Great Northern Peninsula of the island of Newfoundland, lies the remains of an 11th-century Viking settlement. Here you’ll find what is left of wood-framed peat-turf buildings, similar to those found in Norse Greenland and Iceland. Visitors can tour the Viking ruins, go Humpback whale watching, and experience what life was like for the Viking encampment in 1000 AD.

This colourful port town located in Nova Scotia is recognized as one of the best surviving planned British colonial towns in North America. Founded in the mid-17oos, Lunenburg features harbour-side streets lined with unique shops and restaurants that blend with the well-preserved and colourfully painted historic homes.

Happy #CanadaDay everyone! I’m lucky and thankful to call such a vast, beautiful, and welcoming country home. 💙🇨🇦 #IveBeenBitTravel View the full photo from my profile!

Located in Labrador, Red Bay was established by Basque mariners in the 16th century and was the former home to several of the Basque whaling stations and fishing village. This site used to attract large numbers of right and bowhead whales which drew whalers from the Basque region of Spain and France to the Strait of Belle Isle. For nearly 70 years, Basque whalers made the dangerous, month-long journey across the Atlantic to hunt whales and produce the oil that lit the lamps of Europe.

It was a lovely evening for a stroll along the #rideaucanal.

Ottawa’s Rideau Canal wasn’t officially recognized as a UNESCO site until 2007 and is a monumental early 19th-century construction covering 202 km of the Rideau and Cataraqui rivers from Ottawa south to Kingston Harbour. In the summer, the Canal is the perfect spot for jogging or cycling and in the winter it turns into the longest skating rink in the world.

This site is a former village from Ninstints (Nans Dins) located on a small island off the west coast of Haida Gwaii. Formerly home to 300 residents, the island is now deserted from a disease that wiped out the population in the 1880’s. What remains is houses and carved mortuary and memorial poles, illustrating the Haida people’s art and way of life.

Would still get eaten by a dinosaur up there,🐸🏞#DinosaurProvincialPark #AB #ExploreCanada 📸: @megglowryy

Located near the village of Patricia, Alberta Dinosaur Trail hosts some of the most spectacular barren scenery you’ll ever see. This UNESCO site received its name for being the destination with some of the most important fossil discoveries known to mankind. There have been around 35 different species of dinosaur’s found here and is the perfect destination for those looking to embrace some ancient history, as you’ll be able to see the badlands where some of the most well-known dinosaurs roamed millions of years ago.

@aircanada this is one of the beautiful views I experienced while hiking the Gros Morne Mountain in Gros Morne National Park. It’s one of my many special places in Canada ❤️. There are many reasons why this place is special to me, one being that it’s in my home province of Newfoundland! #Canada150

Located on the west coast of the island of Newfoundland, Gros Morne National Park has been shaped by colliding continents and grinding glaciers. What’s resulted is some spectacular scenery, with ocean crust and rocks of the Earth’s mantle exposed. Visitors can explore the walled gorge of Western Brook Pond, look for moose and caribou, hike to the alpine highlands, and explore the colourful nearby seaside communities.

Located along the coast of Nova Scotia, the Joggins Fossil Cliffs is where the highest tides in the world reveal the most complete fossil record of the “Coal Age,” 100 million years before the dinosaurs. Home to 14.7 km of sea cliffs, low bluffs, rock platforms, and beach, the site features three different ecosystems and is just as gorgeous as it is diverse.

To describe the feelings I had while taking this picture is nearly impossible. It’s said that a picture is worth a thousand words. In this case, it was worth: 12 days, 6 clients, 78 miles, 15,000′ of elevation gain and loss, heavy packs, no trails, and some of the most pristine wilderness in the world. Yes, you can fly into remote wilderness, but when you hike it, you make that many more memories and the overall objective is that much more rewarding. To say I enjoy my job/life is an understatement. #donjekglacier #wrangellsaintelias #burwashrange #alaskamountainguides

This world heritage site is combined of four national parks, Kluane, Wrangell-St. Elias, Glacier Bay, and Tatshenshini-Alesk which make up a stretch between British Columbia, the Yukon, and Alaska. This breathtaking site features glaciers and high peaked mountains and is home to grizzly bears, caribou and Dall’s sheep. The site also contains the largest non-polar icefield in the world.

Located in south-eastern Quebec on the southern coast of the Gaspé peninsula, Miguasha National Park is a palaeontological site considered to be the world’s most outstanding illustration of the Devonian Period known as the ‘Age of Fishes’.  Here you’ll find five out of the six fossil fish groups from that period of time.

Mistaken Point is actually the most recent Canadian site to become a UNESCO World Heritage Site and is located at the south-eastern tip of Newfoundland. Home to a 17-km strip of ragged and beautifully jagged cliffs, this site is also home to the oldest known collection of fossils found anywhere in the world.

Located along the South Nahanni River, one of the most spectacular wild rivers in North America, this UNESCO site is home to deep canyons and huge waterfalls; the South Nahanni River surges over a drop twice the height of Niagara Falls. The park is also home to a variety of wild animals such as wolves, grizzly bears, caribou, Dall sheep and mountain goats.

it [wilderness] is a place where trees grow that were not planted, and a man can walk and he is not trespassing. where @watertonlakesnationalpark & @glaciernps meet, is the border between Canada & the United States; the world’s first international peace park. in this photo just past the small dock, at the most narrow point of the valley, lies the undefended border. the hike across the two nations was well worth the scenery but even more exciting was the wildlife! 🐻 🇨🇦 ✌🏽🇺🇸 #crownofthecontinent #peacepark #npsroadtrip

In 1932, Waterton Lakes National Park (Alberta) was combined with the Glacier National Park (Montana) to form the world’s largest International Peace Park. The parks are located on the border between the two countries and offer breathtaking scenery. This is a great site for nature lovers to check out, as the park is home to quite a number of animals and different species as well as prairie, forest, and alpine and glacial features.

Located on the plains in the north-central region of Canada, Wood Buffalo National Park is home to the world’s largest population of wild bison. This also happens to be the country’s largest national park and has the world’s largest inland delta, located at the mouth of the Peace and Athabasca rivers.