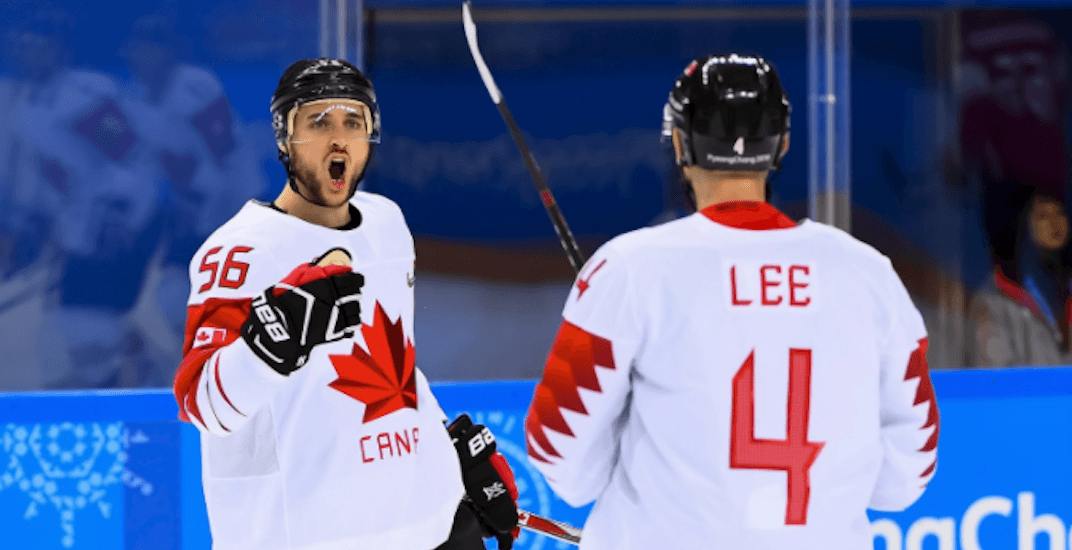 Heading into the first men’s Olympic hockey tournament without NHL participation since 1994, a lot of people are wondering if anyone will care about this edition of Team Canada.

If their opening game is any indication, this is a team that our country can rally around.

A hard-working bunch of Canadian hockey players put forth a great effort against Switzerland on Thursday, defeating their opponent 5-1.

Canada was organized and physical against the Swiss, getting a pair of goals each from forwards Rene Bourque and Wojtek Wolski. Defenceman Maxim Noreau also added a goal for the Canadians.

Bourque started things off three minutes into the game, tipping in a shot for his first goal.

🏒Rene Bourque tips one in and opens the scoring for Canada🏒#PyeongChang2018 pic.twitter.com/eWwkij0sQS

Noreau made it 2-0 seven and a half minutes into the opening frame, with a booming one-timer from the point on the power play.

Max Noreau scores with a rocket from the point on the power play. 2-0.#PyeongChang2018https://t.co/nzCZEYiTJ1 pic.twitter.com/PjHev7YgH3

🏒Rene Bourque scores his second of the game🏒

Wolski’s first goal came less than a minute after the 3-0 goal, and it was of the highlight-reel variety.

Wolski’s second was scored into an empty net.

🏒@WojtekWolski86 scores his 2nd of the game on an empty net🏒

Derek Roy had a strong game, with three assists, to lead the team in points.

“Hockey Canada’s done a great job getting us ready, and for us to come out and work hard, it’s a great feeling,” said Roy. “Later in the game we [have to] be a little more poised with the puck. [The Swiss] came at us in the third period and we sat back a little bit. Our power play did a great job, our [penalty-kill) did a pretty good job, and moving forward, discipline will be huge.”

Goaltender Ben Scrivens got the start in net, stopping 28 of the 29 shots he faced.

Canada’s next game is on Friday at 7 pm PT / 10 pm ET against the Czech Republic.