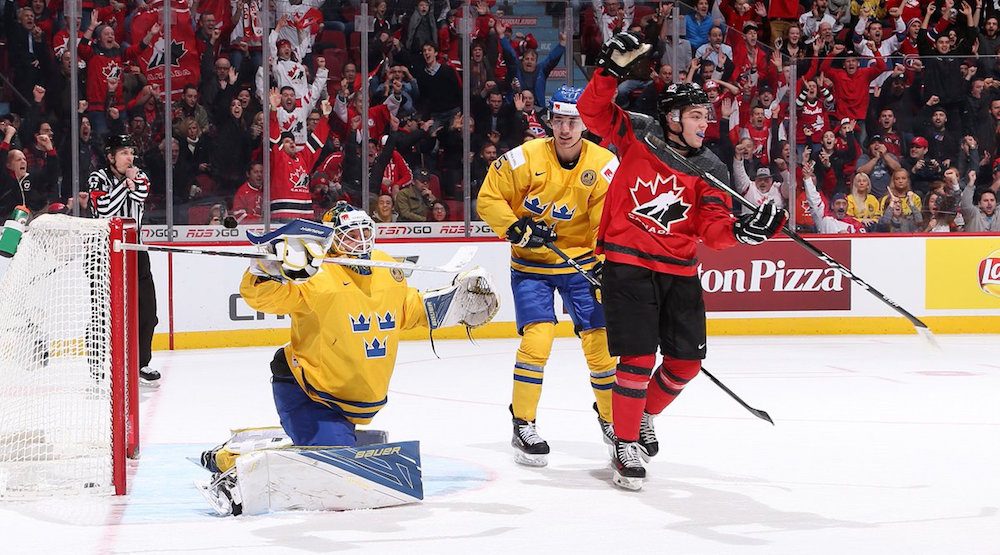 Some had Canada pegged as the underdogs coming into tonight’s semifinal World Junior game against Sweden.

After all, Sweden has gone undefeated while scoring just as many goals as Canada, and allowing fewer.

But once the game started, Canada showed they weren’t the underdog, dominating the majority of play en route to a 5-2 win.

Now, the final test of the tournament is a rematch against the USA. Canada is guaranteed a medal, but whether it will be gold or silver depends on how they play on Thursday.

Canada coach Dominic Ducharme decided to go with Connor Ingram in goal against Sweden, despite a shaky performance against the Czech Republic last game.

It started with a shorthanded goal on a shot by Joel Eriksson Ek that went under the arm of Ingram.

Fortunately, Canada was able to tie the game under two minutes later thanks to Mitchell Stephens and Anthony Cirelli combining in front of the Swedish net.

Just 22 seconds later, the Swedes would strike once more.

Carl Grundstrom got in behind the Canada defence, and ended up scoring despite losing control of the puck.

That would be it for Ingram, who stopped just one of the three shots he faced in eight minutes of work.

Gotta feel for Ingram. He's been so fantastic for the Blazers this year. Just wasn't able to put it together for whatever reason. #WJC2017

Enter Carter Hart, who last played five days ago when he stopped 23 of 25 against Latvia.

Hart looked strong early on, making several saves and killing off a pair of Sweden power plays. Before the period ended, Canada would even things up.

Anthony Cirelli ties it for Canada. Nice feed by Kale Clauge to spot Cirelli, who rips one high-glove past Sandstrom. #WorldJuniors pic.twitter.com/x4YRfRRBYG

It was Anthony Cirelli with a perfect shot over the glove of Felix Sandstrom to tie the game at two apiece. Second game in a row now that Canada’s bottom-six forwards have come up big.

Hart would finish the period with 13 saves, with Sweden actually outshooting Canada 16-12 in the first.

Carter Hart, a work of art

In the second period, Canada took over control of the game and had several opportunities to score.

Finally, they took the lead 12 minutes into the period when Julien Gauthier scored on a jam play at the side of the goal.

That was the only goal in the period, and Sweden can thank their goalie for that. Sandstrom was great throughout the period, but he made two saves in particular that were spectacular to keep his team within a goal.

Hart was solid in the other end. He made another eleven saves in the second period, including one that he grabbed right off the goal line.

That set the stage for a high-stakes final period with Canada holding a 3-2 lead heading into the third.

After Sandstrom stood tall in the first few minutes of the third, Canada eventually got the insurance goal.

It was team captain Dylan Strome getting the goal, his team-leading ninth point of the tournament, to give Canada the two-goal cushion.

It was a great screen in front by Matthew Barzal to make it possible, as Sandstrom never saw Strome slide it through his pads.

From there, Canada went into the textbook style of play we’ve seen them take on multiple times when holding a lead late in a game.

They played a safe, opportunistic style. Sweden was forced to take shots from the outside and other low-percentage areas, and Hart made the saves he had to make, .

Gauthier added an empty netter before all was said and done, with Canada taking the win by a 5-2 final.

The win sends Canada to the gold medal game, which takes place at 4 pm PT Thursday (tomorrow) against the USA.

The United States are the only team to beat Canada in this tournament, winning 3-1 in the group stage.