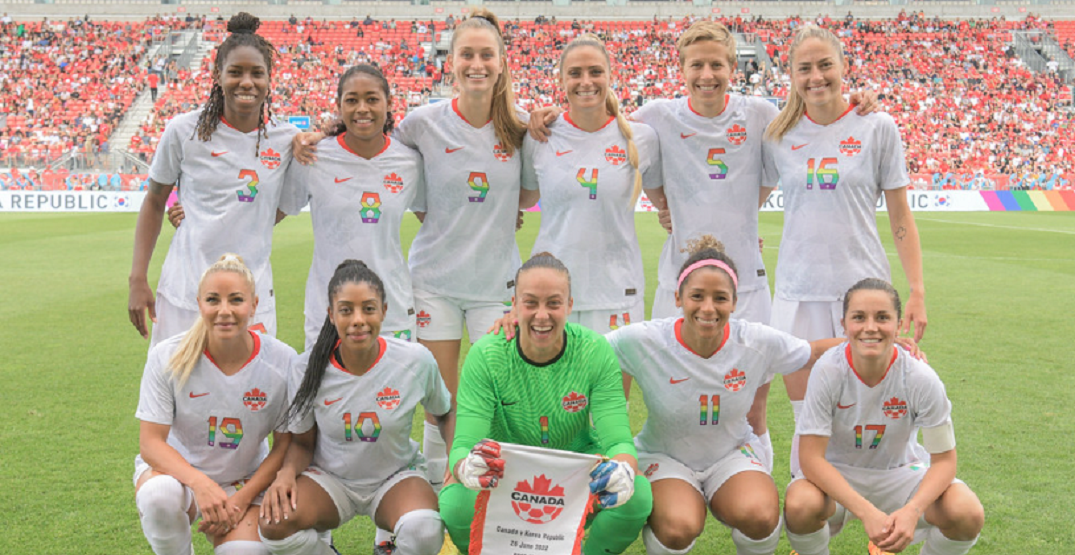 When the Canadian women’s national soccer team took to the field on Sunday, they did so with a bit of extra, well, Pride in their jerseys.

Taking on Korea Republic (colloquially known as South Korea), the team took to the field in white shirts, shorts, and socks, with rainbow lettering on their names and numbers.

The countdown is on! 🍁#CANWNT #Pride365 pic.twitter.com/jbbEIkXxCI

Before the game, which took place the same day as Toronto’s annual Pride Parade, the team put out a short video celebrating Pride:

Join the #CANWNT squad as we celebrate the LGBTQ2+ community as part of tomorrow's Canada v Korea Republic match at BMO Field!

“Pride, to me, means being able to live your truth judgment-free and just free in our society,” goalkeeper Kailen Sheridan said.

“Pride, to me, means resistance,” midfielder Quinn said. “I think it’s important to celebrate all of our identities, but also acknowledge everyone is included in our societies and our sports.”

Quinn made history in 2021 as the world’s first trans Olympic gold medallist, winning the top prize at the Tokyo 2020 Summer Games.

“I think it’s really important we use our platform to promote and celebrate these moments,” Canadian national team coach Bev Priestman said following the match. “This team, this organization, we make it a place where everyone can be who they are.”

“I think it’s really important we use our platform to promote and celebrate these moments.”

From @bev_priestman on why the team wore the uniforms during the match today: pic.twitter.com/EjKcNiaEFq

The Pride jerseys are currently not available for purchase via the Canada Soccer Store. Daily Hive has reached out to Canada Soccer for more information on if they will be made available to the general public.

Canada’s next match comes on July 5, when they take on Trinidad and Tobago in their opening group fixture of the CONCACAF W Championship.