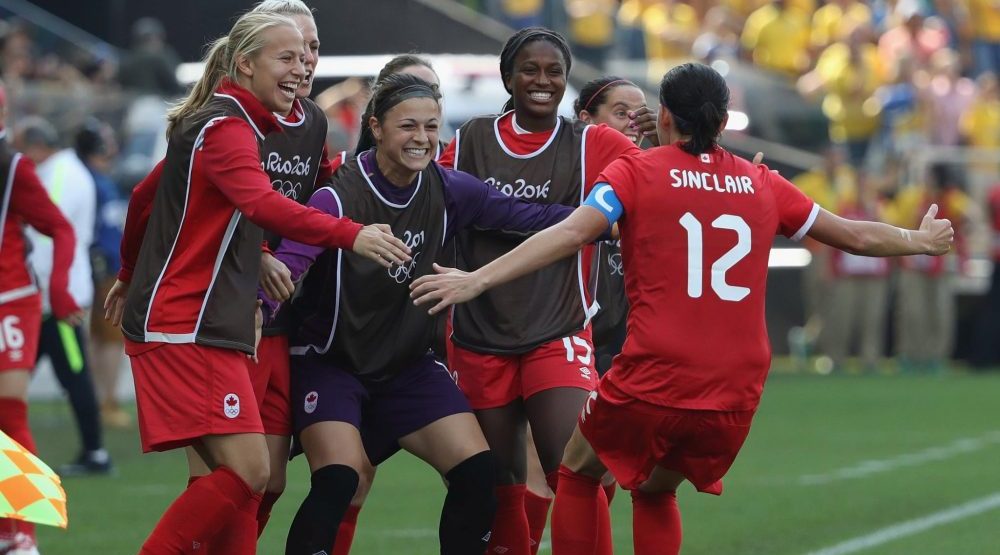 Canada has won the bronze medal in women’s soccer, defeating Brazil 2-1 at their own sport in their own backyard on Friday in Sao Paolo.

Deanne Rose and Christine Sinclair got the goals, as Canada reaches the podium for a second straight Olympics.

Head coach John Herdman made some changes to his starting eleven prior to this game. Deanne Rose, Diana Matheson, and Josee Belanger started the game for Canada. The move to sit Canada’s leading goal scorer Janine Beckie in favour of 17-year-old Deanne Rose could have easily been second guessed. In the end, it looked like a stroke of genius, as Rose played with great pace, scored the first goal, set-up the second, and hit a crossbar to nearly make it 3-0.

Playing in front of a hostile crowd against the host country at Corinthians Arena in Sao Paulo, Canada started off well.

Ten minutes into the game, Christine Sinclair clanged a ball off the crossbar off a free kick, nearly giving Canada the all-important first goal.

In the 25th minute, Canada got it.

Left-back Ashley Lawrence blazed down the wing with great speed and set-up Rose for the first goal.

#CanWNT Deanne Rose opens the scoring. 1-0 #CAN over #BRA in the #Bronze-medal game. https://t.co/xzNAhUlqZn https://t.co/Iz0IWqQYHO

That’s the way things stayed until the 52nd minute, when Canada got the insurance marker to make it 2-0. Jessie Fleming made a nice move to shed a defender before setting up Rose, who showed terrific patience with the ball before setting up Sinclair. Sinclair did what Sinclair does, and converted the chance.

#CanWNT Christine Sinclair gives #CAN a 2-0 lead over #BRA in the #Bronze-medal game. https://t.co/xzNAhUlqZn https://t.co/bY4hbYgqj8

Rose nearly made it 3-0 in the 58th minute, shortly before she was substituted out of the game.

“It was a very fun game for me,” said Rose, who will begin Grade 12 in a few weeks. “The team did well, all we need it was each other. Having this medal around my neck is so overwhelming, I am loving so much.”

Brazil made it close in the 79th minute, when Beatriz converted a chance in the box after a flick-on on a throw-in to make it 2-1. There were some nervous moments, but not many, as Canada held on for the win.

Canada’s captain and best player Sinclair was in tears at the final whistle. As head coach John Herdman explained after the match, she was playing for more than just a bronze medal.

“She lost her dad a couple of months ago, I know that was for him,” said Herdman. “I was at the funeral, I heard her speak about him. That was for him. It was a proud moment for her, and all of us.”

Canada’s defence was a tower of strength in this one. They were aggressive, but remained in control, not receiving any yellow cards.

On the offensive end, Canada was clinical. Their high-end chances far outnumbered those that Brazil had, as the Canadians proved they could play with patience and creativity.

The bronze medal is the culmination of an amazing tournament for Canada. Canada had just about the toughest tournament draw that you could draw up, but they won five games and lost just once.

The future of Canadian soccer looks bright, which is something most weren’t expecting to say in the twilight of Sinclair’s career. At age 33, she may or may not be back for another Olympics, but the youth movement was a successful one. Five players that played in this game for Canada were age 21 or younger.

Four years ago in London, Sinclair put the country on her back. In Brazil, Canada was a much more complete team. They were a better team.

And they should be proud of bronze.