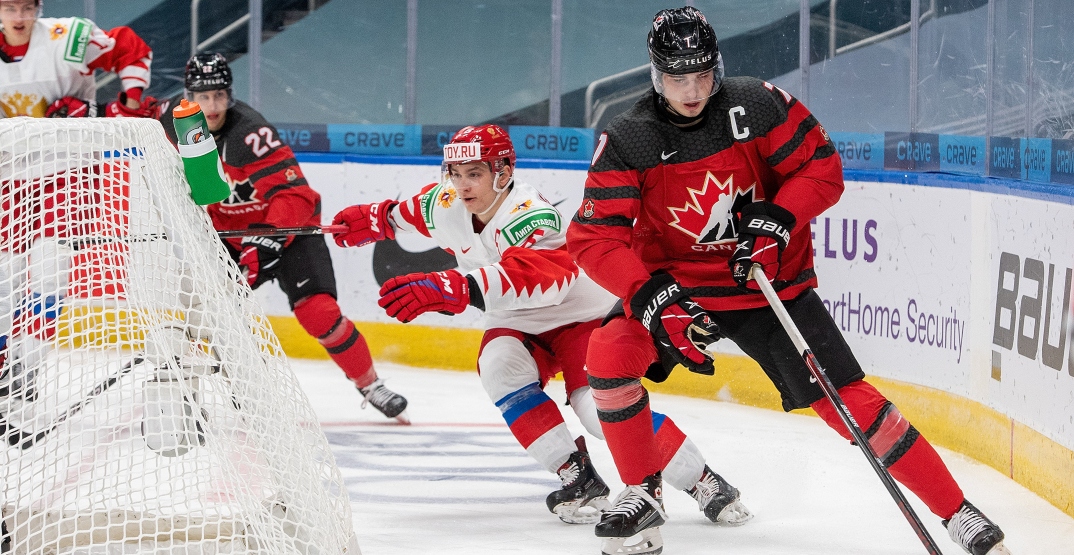 Canadians starving for some hockey finally got a little taste Wednesday night.

Before getting the World Juniors going for real on Boxing Day, Canada got to play a measuring stick game in the form of an exhibition match against Russia. It was a rematch of last year’s gold medal game in the Czech Republic in which Canada staged a dramatic third period comeback to win gold.

They may not have gotten a high-scoring game, but Canadians were ultimately happy with the result. Canada won 1-0 thanks to a shot through a screen by Jamie Drysdale that went off the crossbar and in to break a scoreless tie early in the third period.

Jamie Drysdale (@AnaheimDucks) gets Canada on the board with a post-and-in point shot.

The best chance of the opening frame came from Calgary Flames prospect Jakob Pelletier, who hit the post on a chance in front, leading to a mad scramble in the crease.

Canada was THIS close to taking the lead 🇨🇦🇷🇺 pic.twitter.com/DQsHQTHCcN

Russia held an 11-9 edge in shots through the first period.

Canada turned things up in the second period, outshooting Russia 13-6, but still couldn’t find a way to solve Yaroslav Askarov. The highly-touted goaltending prospect was shaky in last year’s tournament and ultimately ended up as Russia’s backup. However, if Wednesday was any indication, the 11th-overall pick by the Nashville Predators in October’s draft is ready to show people what he’s capable of this time around.

After stopping all 22 shots he faced through 40 minutes, Askarov got to take the rest of the night off as Russia put Toronto Maple Leafs fourth-round pick Artur Akhtyamov in for the third period.

At that point, Canada was probably thrilled to see anyone other than Askarov in net. Sure enough, just about four minutes into the third period, Canada finally got on the board thanks to Drysdale, the sixth-overall pick of the Anaheim Ducks and one of six returning players from last year’s gold medal winning team.

Russia had a great chance to tie the game with just over five minutes remaining on a Yegor Chinakhov breakaway, but Devon Levi turned him aside.

Yegor Chinakhov (@BlueJacketsNHL) goes in on a breakaway but Devon Levi (@FlaPanthers/@GoNUmhockey) shuts the door for Team Canada. pic.twitter.com/4lMWZO9CDw

That was the biggest of Levi’s 23 saves on the night as the Florida Panthers seventh-rounder made a strong case to be the man in between the pipes for Canada in this tournament.

There was a scary moment for Canada, and Chicago Blackhawks fans, in the third when team captain Kirby Dach left the game with an injury following a collision.

This is… uh… very bad! Kirby Dach (@NHLBlackhawks) tries to play the body in the neutral zone, and immediately heads to the bench.

Appears to have injured his hand/wrist/arm area on this play. pic.twitter.com/NRooXud5eL

Dach didn’t return to the game, though that’s not that surprising even if the injury is minor considering that it was an exhibition game. He went for x-rays and we’ll update his status when more information is available.

Canada will play their first round robin game against Germany at 6 pm ET/3 pm PT on Saturday.