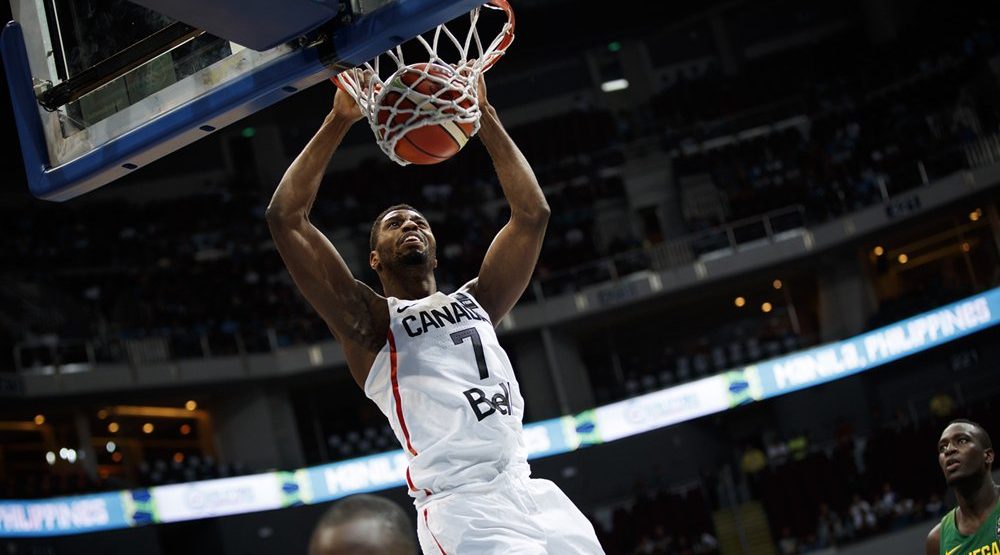 It was a lot closer than they would have liked, but Team Canada is now two wins away from a ticket to Rio after beating #31 ranked Senegal 58-55 on Wednesday.

The win secured first place in Group A for Canada. They will play the second place team from Group B – either France or New Zealand – in the semi-final on Saturday. The winner of this tournament will gain a spot in next month’s Olympics in Brazil.

“It was a great game if you love defence, I thought both teams were very good defensively,” Canada’s head coach Jay Triano said after the game.

“It was a very well fought game and we’re fortunate to get the victory”.

Cory Joseph, who led Canada with 21 points on Tuesday, led all Canadian scorers once again on Wednesday, scoring 13 points in a low scoring game. The Raptors guard also added 5 rebounds and 2 assists, playing a team-high 32:53.

“Cory does a great job of getting into the lane and creating for us offensively, and I thought he was the focus of their defence, and they did a great job disrupting him,” said Triano. “He still made a couple plays when he had to, but they tried to take him away and out of what they do and I give them a lot of credit. That’s why the game was so close.”

Milwaukee Bucks guard Tyler Ennis, who joined Joseph as a starter in the back court, added 12 points of his own. Melvin Ejim scored 11 points and pulled down 8 rebounds off the bench. Cleveland Cavaliers centre Tristan Thompson led the way on the glass, grabbing 10 rebounds, including five at the offensive end.

Senegal’s Maurice Ndour had a game-high 16 points before fouling out in the fourth quarter. That was important, because this game was close until the final buzzer.

Maleye N’Doye hit a three point shot with just over three minutes left, pulling Senegal to within one point at 51-50. Trailing by three points, Clevin Hannah had a decent look to tie the game for Senegal at the buzzer, but couldn’t convert.

“We’ve had a mixture of games, we’ve had some blowouts or close-to-blowouts, and tonight was a close game,” said Ennis. “I think it’s great for us heading into the next couple games, just having one that was close under the belt and we had to really seal the game at the end.”