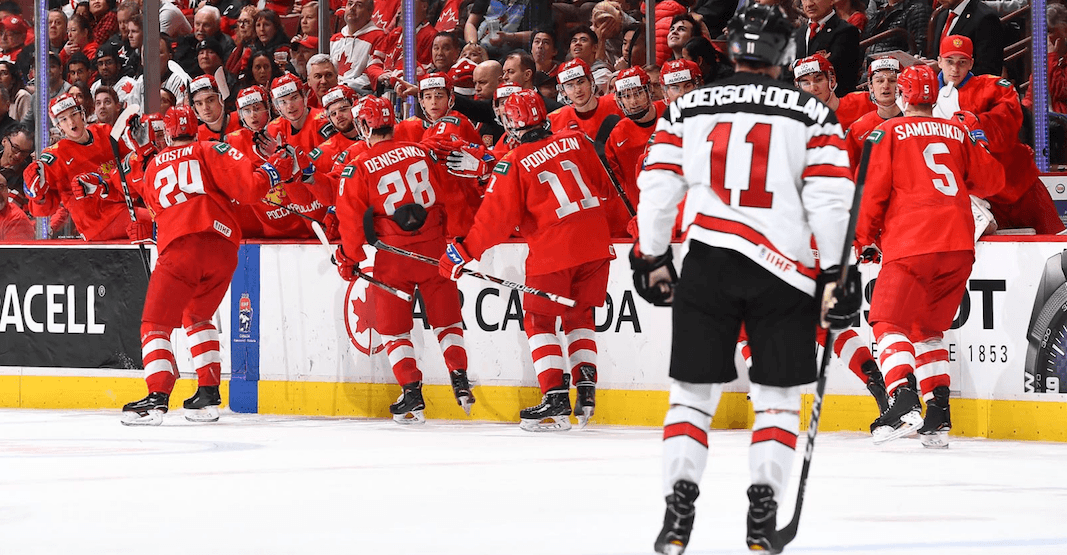 While the New Year’s Eve clash between Canada and Russia lived up to the hype, the ending didn’t play out as hoped.

The most anticipated game of World Juniors round robin play was fast, physical, and saw great scoring chances at both ends.

Both goaltenders were stellar but it was Russian goalie Pyotr Kochetkov outdueling Michael DiPietro as Canada lost 2-1 to Russia and will finish 2nd in Group A.

Canada has scored early in every game so far this tournament, and that trend continued against Russia with Cody Glass scoring just over two minutes in.

Cody Glass (@pdxwinterhawks) finds the back of the net 2:20 into the game to open up the scoring for #Canada! 🇨🇦#REPRESENT #WorldJuniors #CANvsRUS pic.twitter.com/PgO10TVnum

Russia didn’t take long to respond. Grigori Denisenko tied the game on a one-time powerplay blast that beat DiPietro to knot the game at one apiece.

This game was DiPietro’s first real challenge, having only previously faced Denmark and Czech Republic teams that didn’t test him with much regularity.

He responded well to the increased workload and made some big stops for Canada.

At the other end, Pyotr Kochetkov was having himself a game as well.

Russia outchanced Canada in the first period while Canada won the second, and it became a 20 minute game with a 1-1 score heading into the third period.

11 minutes into the third period, it was Pavel Shen breaking the game open for Russia.

Pavel Shen scores his 3rd goal of the tournament to give #Russia a 2-1 lead with 9 minutes remainng in the 3rd period. 🇷🇺@russiahockey #WorldJuniors #CANvsRUS pic.twitter.com/4eOovRg876

Canada had plenty of chances to tie the game, especially with the net empty in the final minute, but ultimately Kochetkov and the Russians held the fort to claim the two points and 1st place in Group A.

Canada is still in fine shape, but this was an important game. With a win, Canada would’ve gotten to play Slovakia in the quarterfinals. Instead they’ll face Finland, the 3rd seed from Group B and a much more formidable opponent.

That game will take place on Wednesday at 3:30 pm PT at Rogers Arena.