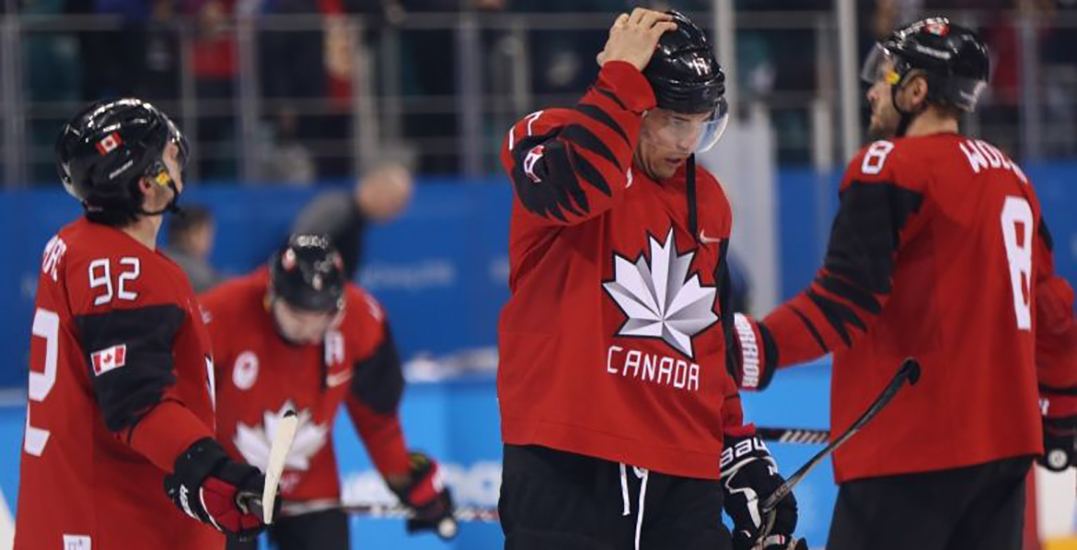 The 2018 men’s tournament for Olympic hockey has been anything but ordinary.

The lack of NHL players in this year’s tournament has created ample room for upset and surprise. Both Sweden and the United States were knocked out of medal contention by underdog teams.

The latest shocker, is an upset loss to Team Canada that leaves them fighting for a bronze medal. Not only did they lose to the surprising hands of Germany, but it’s the first time in eight years that the team hasn’t won gold.

The 4-3 loss, has been more than enough to shock the country.

9.15 in morning and I’m having beer for breakfast to counteract high stress level. 😲 #CANvsGER

This is super weird. Neither Russians, Americans, nor Canadians for the gold medal game. #CANvsGER #OlympicHockey #Olympics2018

Who cares about hockey anyway? We don’t. Canada barely plays the sport. Whatever. It’s fine. I SAID IT’S FINE. #CANvsGER

I feel like Canada’s identity is in crisis…first curling, now hockey? Who are we?? 🇨🇦 #Olympics #CANvsGER

I guess Canada forgot to show up for the first two periods of the gold medal game. Congrats, Deutschland! #CANvsGER #OlympicHockey

A lot were quick to blame the NHL, for not allowing NHL players to go in the first place, though Gary Bettman shouldered a lot of the blame.

Fuck you Gary Bettman. We are losing to Germany for fucks sake. What a shame. #CANvsGER

Good morning to everyone except for Gary Bettman. #CANvsGER #WinterOlympics

Remember Germany that if you win the gold🥇to set some aside for Gary Bettman and the NHL Owners as they made it easier for you to defeat Sweden🇸🇪 and Canada🇨🇦 by taking away their best players.

Easy to see why these are exNHL players or never were NHL players.. Can you say hands of stone.. Please God let us dress McDavid and Crosby for the 3rd period #CANvsGER

One even took a shot at the Vancouver Canucks, with a Canadian team heavily composed of a former Canucks coach and players.

Quite a few, however, handled it with one part grace and one part skepticism, thankful for the opportunity to see non-NHL players compete in the tournament.

Nobody ever likes when I say this but as much as it sucks for Canada, wins like this are good for hockey. It’s always the same half-dozen countries playing for gold. I hope Germany wins it.

Germany vs Russia in the winter. Let’s see how that one goes this time around…

Despite the rough game, I still like seeing the non-NHL guys get a shot. It’s been a thrill for them and their families. If it had been McDavid, Crosby, plus 12 more 6’5″ battleships, they would have won every game 2-0 and it would have been kinda dull like Sochi #CANvsGER

Mad props to the Canadian Men, who had to convince an entire country to cheer for them because there was no guarantee of winning.

We’ve been spoiled, and you guys have made us proud.

The German Foreign Office also put out this nice message to its citizens residing in Canada:

Travel advisory: Germans in Canada should exercise a high degree of empathy. Be nice, don’t gloat, give hugs, buy rounds of hot chocolate.

Canada will face off against the Czech Republic, in pursuit of the bronze medal. Puck drops on Saturday, February 24 at 4:10 am PT / 7:10 am ET.