Is the Canada Line’s Richmond-Brighouse Station in need of a complete re-build to accommodate a second track and additional platform?

Crowding was such an issue this morning at Richmond-Brighouse Station that SkyTrain attendants had to temporarily close access to its single track platform.

The crush at 8 a.m. comes a week after the first day of the new university school year. There were no technical issues or service disruptions: the terminus station is built with a single track, and it has increasingly been unable to meet the demands of its growing peak hour ridership.

“There were too many people and not frequent enough trains to clear them out so they had to close down the platform level and hold people at the ticketing level until the backlog cleared in between trains,” a regular transit rider told Vancity Buzz. He says this has not happened to him on the Canada Line for over a year.

Currently, the system’s split frequency at Richmond and Sea Island are as infrequent as every 6 to 7 minutes during peak hours, 12 minutes in evenings, and 20 minutes at late night.

The final 640-metre spans of the Canada Line before the terminuses at Richmond-Brighouse and YVR Airport stations were single tracked with a slenderer guideway to reduce construction costs and appease the City of Richmond’s concerns over street aesthetics.

Crowding issues are made even worse by the decision to build short 50-metre length stations, especially at Richmond-Brighouse as it serves a highly urbanized area, a major shopping centre, and Richmond’s largest bus loop – the start and end point of many of the municipality’s bus routes. It is now one of the system’s busiest stations.

The Canada Line opened in August 2009 and within a year it reached its break-even ridership threshold of 100,000 boardings per day.

As of this summer, it is now five years ahead of the project planners’ ridership forecasts: by June 2014, the system was recording an average weekday ridership in excess of 122,000. 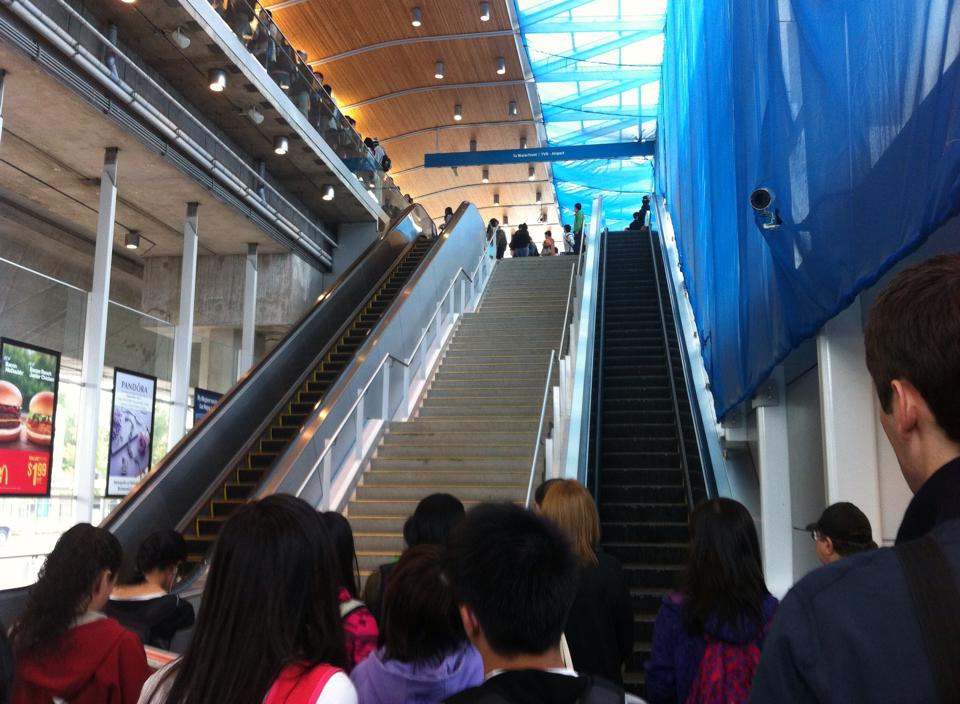