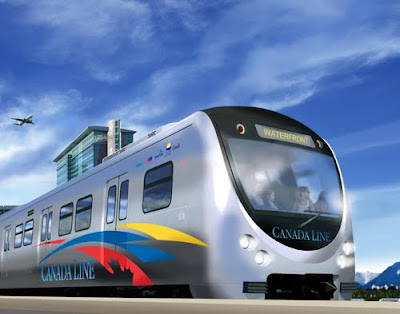 The Canada Line now averages 94,000 boardings per day, it’s capacity is 100,000 riders. The ridership numbers have far surpassed TransLink’s expectations. They didn’t expect these types of numbers until at least 2013. Increased ridership is great news and TransLink will now have to come up with a solution to deal with the extra ridership and fast.
The ridership has been increasing steadily since the Olympics. I know that every time I’m on it, it’s full. By the time the train reaches Cambie and Marine, it’s damn near possible to squeeze in during the rush hour rat race. Moving forward, this will only worsen once the proposed PCI development is finished at the Marine/Cambie site (see images and details of the development here) and the Cambie corridor gets built out.
Ultimately what is needed is more trains and frequent service, something that TransLink has said may come quickly for peak hour traffic. On that note I’d also like to see the trains run a little longer. On Friday’s and Saturday nights clubs close at 3am on the strip and the last train leaves at 1:30am. Perhaps, expanded service on the weekend is also in order.

We’ll have to wait and see how this plays out.