It’s become common to see billboards and advertisements lined up across our roadways, corporate messages and promotions overriding our sight lines – but in Surrey, there’s one screen that’s sending a different message.

If you’ve ever taken the Expo SkyTrain line between Gateway and Surrey Central stations, there’s a good chance you’ve seen it.

Projected on the west wall of the Chuck Bailey Recreation Centre is the Surrey UrbanScreen: the largest permanent, non-commercial outdoor screen in Canada. Instead of business endorsements, it’s showcasing large-scale interactive art.

It’s been running since 2010 as a remote programming venue of the Surrey Art Gallery. Around 30 minutes after dark, four high-powered data projectors turn on, illuminating the blank wall. To get the visual works onto the face of the building, the art pieces are installed on a computer inside of the recreation centre.

It was in the lobby of the Chuck Bailey Rec Centre where we met with Steve DiPasquale. “I love the fact that (UrbanScreen) is kind of a plug and play, infinitely dynamic and infinitely revisable work that invites people to just be hosted there for a time,” he beamed.

DiPasquale is one of two artists behind The Space of Difference, the current exhibition being shown on the UrbanScreen.

“The Space of Difference was started with that idea of colliding [Surrey’s] past and present and then we thought esthetically, how can we possibly do that?”

Visually, it certainly is eye catching. Imagine a rotating billboard, changing from one image to the next. There’s that moment of transition, where the two images create an alternating striped matrix – that is almost what The Space of Difference looks like.

Except the images are not advertisements, but rather 12 videos representing Surrey’s past and 12 videos from its present, colliding in a randomized way. 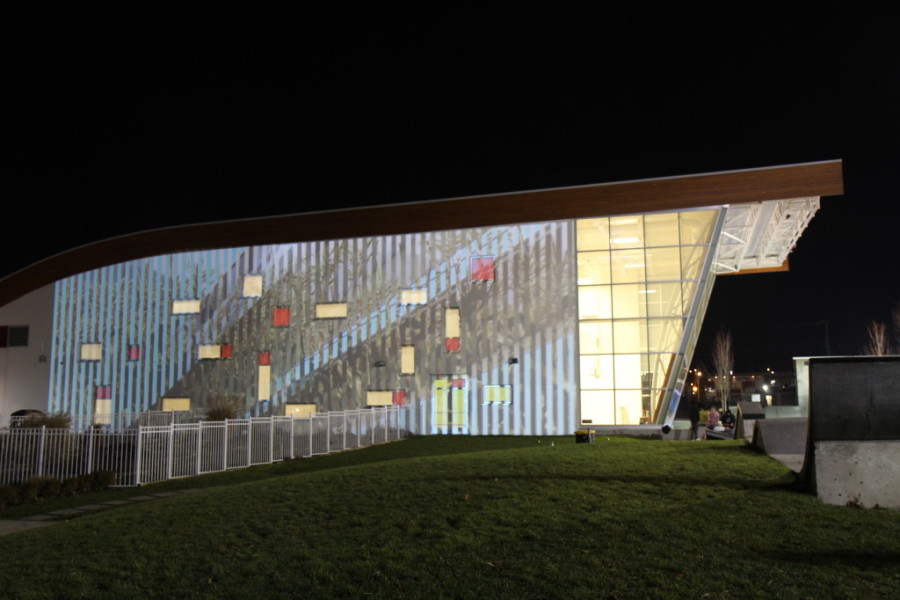 Bryan Beça is the second artist. He’s on speakerphone, calling from his home in Toronto. “What really interested us about this opportunity was the SkyTrain tracks,” he said.

DiPasquale chimed in, “what is the way we can have the person on the SkyTrain feel like they are initiating a rupture in time?”

Approximately 30,000 SkyTrain commuters pass by the UrbanScreen each day, so Beça and DiPasquale decided to use the train as a trigger to change the art on the screen.

A webcam is pointed at the tracks, and when a train passes, a motion detector tells the art piece to interchange a variety of videos, ranging from a rustling cornfield to a skate park.

“Maybe you would skate beside the corn field and maybe agriculture and recreation aren’t mutually exclusive or any number of different conversations,” Beça suggested.

The motion from the SkyTrain is not the only interactive element to this piece; the software is also tapping into Environment Canada’s database of tidal information from the Fraser River.

“So it really kind of reacts to its environment and creates a very dynamic piece that’s different every day,” Beça’s liveliness is heard through the speakerphone.

By exploring Surrey’s past and present through this art exhibition, these two artists are sparking conversation about the future of B.C.’s fastest growing city.

“Surrey is this complex space that deserves to be explored in a really thoughtful way,” Beça said, “and here was this opportunity to look at the site very carefully and try to mine some of its history and have a conversation about what Surrey is becoming.”

The Space of Difference is running every evening until March 29, beginning 30 minutes after dark and ending at midnight. The Surrey UrbanScreen is also fundraising to replace the specialized equipment for the venue.