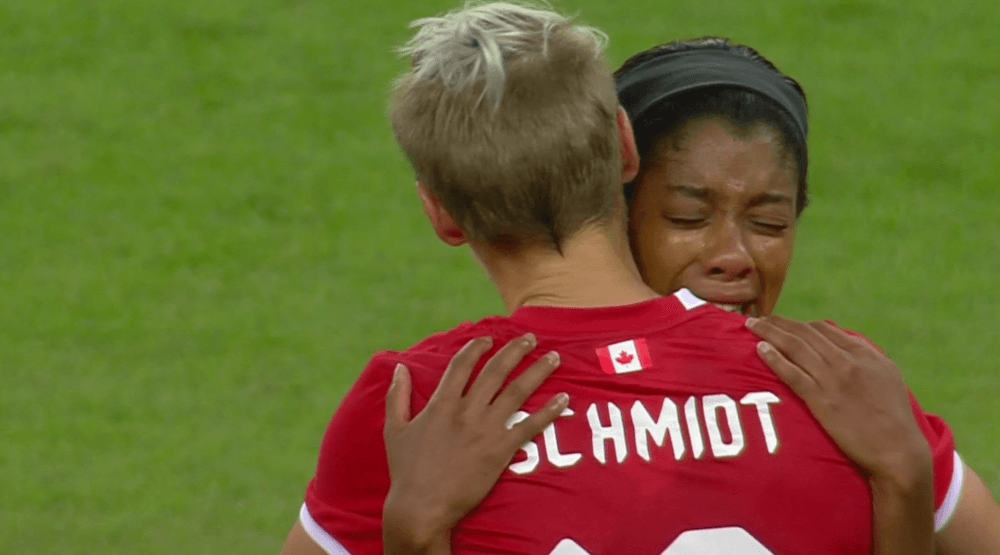 Canada’s golden dreams have been crushed, losing to Germany 2-0 in women’s soccer in the semi-final at the Olympics on Tuesday.

Their tournament isn’t over though, as Canada will play the hosts from Brazil for bronze at 9 am PT (12 pm ET) on Friday.

“I thought they worked hard tonight, they’ve given it their all and they came up short,” Canada’s head coach John Herdman said post-match. “We’re going to have to fight with the Brazilians for the bronze medal. I was in this situation four years ago, we’ll bring it home. We have to. That’s what we’ve promised to do.

Germany got on the board first on a well taken penalty from Melanie Behringer in the 21st minute.

#GER opens the scoring against #CanWNT with a penalty. #Rio2016 https://t.co/mf6sN51JQv https://t.co/jmhcgcbq2V

Germany was awarded the chance after a terribly ill-timed tackle by Canadian defender Kadeisha Buchanan at the edge of the box. The tackle was an unnecessary play from a young player with immense talent. She should learn from it.

Just like Canada’s game against Germany in the preliminary round, they found themselves down 1-0 off a penalty early in the game.

Buchanan had a chance to redeem herself in the 45th minute, getting a dangerous header on goal off a corner. But the 1-0 scoreline was how it stayed at halftime.

The Germans got the insurance marker in the 60th minute from Sara Daebritz, who put a shot past goalkeeper Stephanie Labbe from top of the box.

From there, Canada was forced to take chances for a goal, and they got some great ones.

Christine Sinclair had a chance in close in the 67th minute.

#CanWNT pressing with a chance from Christine Sinclair. 2-0 #GER leads in the 69th minute. https://t.co/mf6sN5jlf5 https://t.co/6EIokcykHh

Diana Matheson probably had Canada’s best chance on goal in the 77th minute.

Tears flowed from many of the Canadian players, crushed at the defeat. Canada was the only team with a perfect record (4-0) coming into the game, and they’ve made their country proud.

To be in the position they’re in is an incredible accomplishment for our country. Canada can play with the world powers, and they’re doing it with numerous young players on the way up.

The future is bright for women’s soccer in Canada.