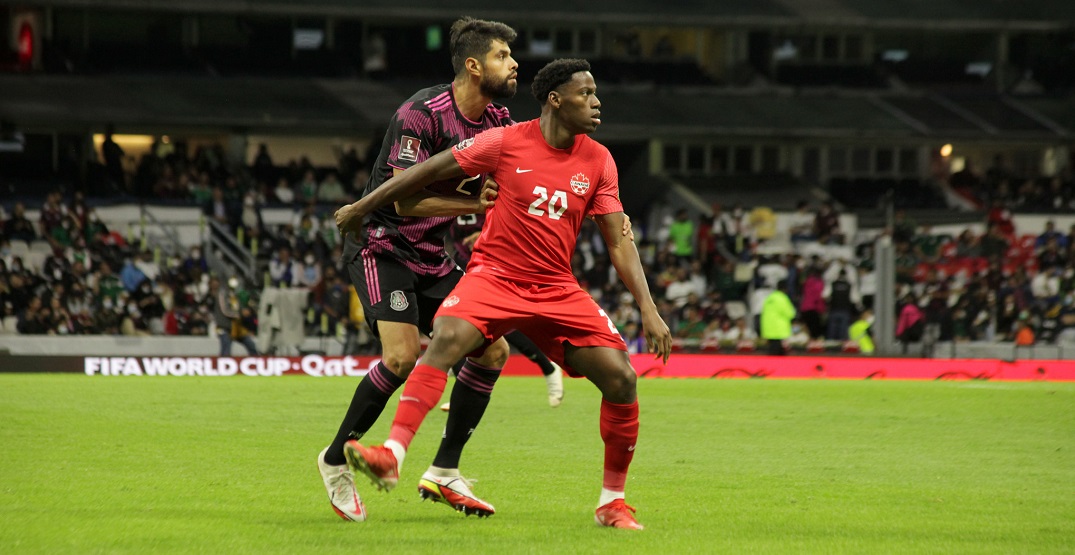 Canada moved one step closer to their World Cup dream on Thursday with a big result in Mexico.

The Canadians picked up a crucial result at Mexico City’s iconic Estadio Azteca, managing a 1-1 draw.

Unfortunately, the game was marred by a second half-stoppage of fans in the stadium who were uttering homophobic chants, with a warning being issued to those in attendance.

It looked early on like it could be a familiar disappointment for the Canadian men’s national team, with Jorge Sanchez giving the hosts a 1-0 lead 21 minutes into the match.

But Toronto FC forward Jonathan Osorio levelled up the scoring late in the first half.

JONATHAN OSORIO with the CLUTCH equalizer, picking up Alphonso Davies' through pass and shooting past G. Ochoa for his 7th goal for #CanMNT

Canadian head coach John Herdman said postgame it was the best performance he’d seen from Osorio in the Canadian jersey.

“I’ve watched Jonathan grow into a stoic leader for this team,” Herdman said. “He’s a big part of setting the culture of this team on and off the pitch.”

It was actually Canada’s first goal on Mexican soil since 1980, having been outscored 20-0 in that process.

🇨🇦 Canada has scored vs Mexico at Estadio Azteca for the first time since 1980.

Before tonight, Mexico had outscored Canada 20-0 in their five previous meetings at Azteca.

Herdman added that he didn’t put pressure on the team to get a shutout or get down on themselves when they went a goal down.

“That resilience is something that’s part of our DNA now, so we don’t worry about that,” Herdman said. “We are happy [with the draw], but could’ve been better.”

Mexican star striker Raul Jimenez, who plays for Wolverhampton of the Premier League, appeared to give his country the lead in the 66th minute, but the goal was ruled offside.

“If you asked me if a point here is positive it is,” Canadian defender Steven Vitoria said postmatch. “But we’re not completely happy.”

In other action taking place on Thursday, the United States topped Jamaica by a 2-0 score. With eight points through four matches, the Americans sit on top of the CONCACAF qualifying group.

The top three teams from the final qualifying round qualify, with the fourth being sent to an intercontinental playoff round

Canada is aiming to make its first World Cup since 1986, with ten matches left in the final qualifying round.

Canada travels to Jamaica for a match on Sunday, before returning home Wednesday to host Panama at Toronto’s BMO Field.

Canada will host Mexico (and Costa Rica) in November, with the matches set to take place at Edmonton’s Commonwealth Stadium.

Remind me what the weather is like in Edmonton in mid-November. Asking for some friends. #CANMNT #ForCanada