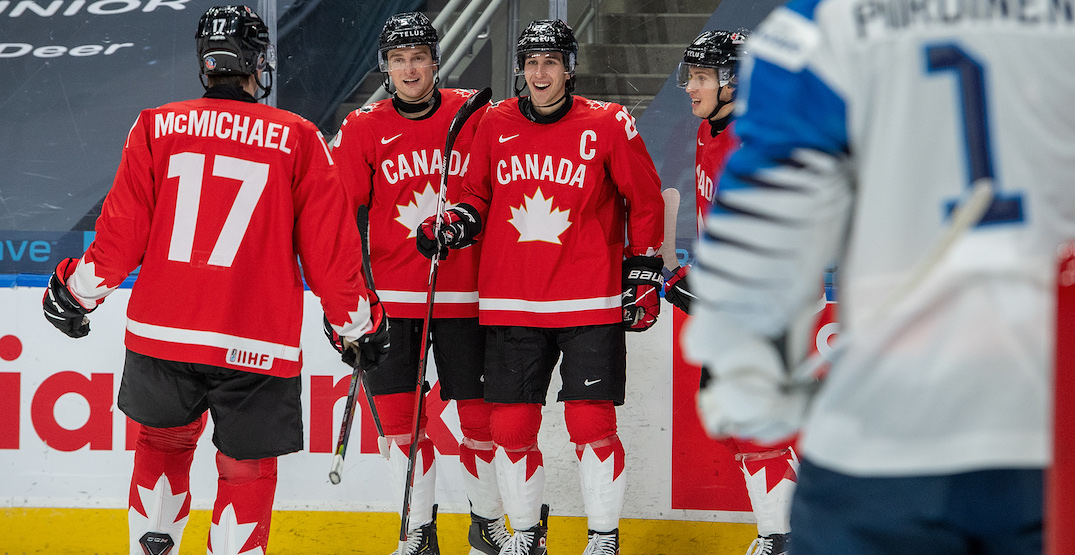 Even by Canada’s standards at the World Juniors, this is an extremely impressive team.

Facing their toughest opponent yet, Canada looked as dominant as they have all tournament long, although you wouldn’t know it looking at the final score. Canada beat Finland 4-1 on New Year’s Eve to win Group A, but it was the manner in which they did it that was so encouraging.

Their forecheck was relentless, their passing near-perfect, and the Finns seemed frustrated and out of breath as Canada put on a clinic around them. Finland has won three of the last six gold medals, but Canada seemed to pick them apart effortlessly.

Even with injuries to Kirby Dach and, recently, Alex Newhook, Canada is proving there is no shortage of talent throughout their lineup.

With Dach sidelined for the tournament it’s been Dylan Cozens leading the loaded offence for Canada. He scored his fifth goal of the tournament to open the scoring for Canada in the first period.

Dylan Cozens leaves his shoes on and walks right in. 🚨🏒#WorldJuniors pic.twitter.com/D6dTQK3CWY

Cozens also added an empty netter for his eleventh point, which leads all players at the World Juniors.

While Canada outshot Finland 17-1 in the opening frame, they weren’t able to add any insurance goals until the second period.

Dylan Holloway deflected a puck in for his first goal of the tournament and Canada’s second of the game after all sorts of pressure in the Finnish zone.

Canada had to work hard for this one! Dylan Holloway is credited with the goal 👀 pic.twitter.com/51dsEeSXPX

Shortly after, Peyton Krebs got his third goal of the tournament to give Canada a commanding 3-0 lead.

Brad Lambert got Finland on the board on a third period power play, snapping Devon Levi’s shutout streak of over 105 minutes.

Brad Lambert gets Finland on the board with a power-play goal! pic.twitter.com/gKWkADWAw2

That was as close as it would get though, as Canada locked things down at five-on-five and didn’t allow Finland to get any quality scoring chances.

It was one of the most dominant displays in recent memory by Canada considering the strength of their opponent, particularly in the first 40 minutes where they had a 23-0 edge in high-danger shots, and a 35-7 edge in total shots.

This was a crucial win, as it guarantees Canada will face the Czech Republic in the quarter-finals. Finland, on the other hand, will have to face a far more formidable opponent — either Sweden or USA.

Those games will take place on Saturday, January 2, with Canada facing off against the Czechs at 7 pm ET/4 pm PT.