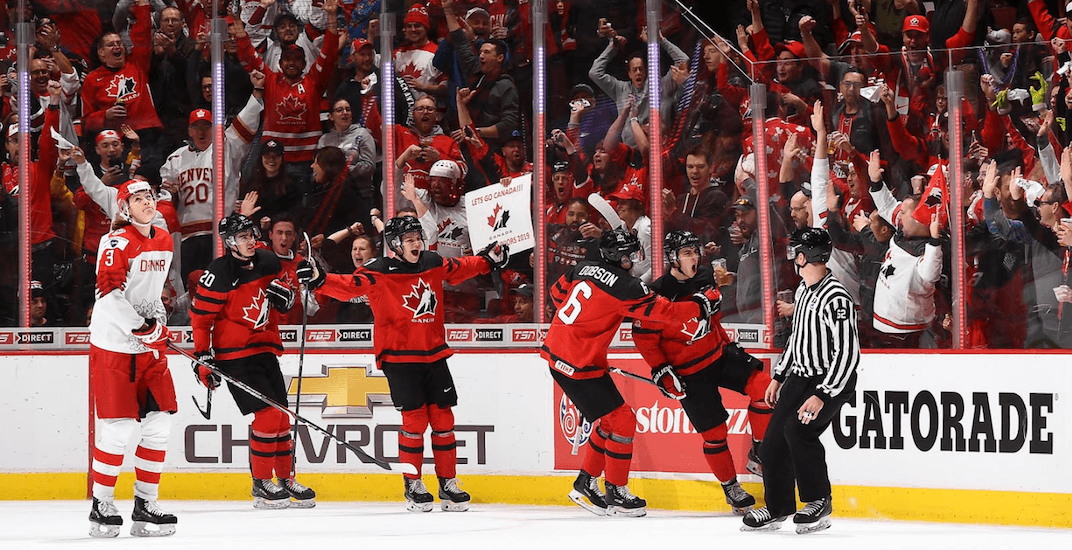 After a less-than-impressive trio of pre-tournament games, which included a 5-2 loss to Finland, Canada didn’t exactly enter the World Juniors firing on all cylinders.

Well, they are now.

Team Canada was virtually flawless on the opening day of the World Juniors, beating Denmark 14-0 at Rogers Arena in Vancouver. Fans will surely have Canada’s new goal song, “Don’t stop the party” by Pitbull, stuck in their heads all night.

The Canadians had more goals than the Danes had shots, dominating play with a 45-14 edge on the shot clock.

Morgan Frost, a Philadelphia Flyers draft pick and son of former Toronto Maple Leafs PA announcer Andy Frost, was named Player of the Game for Canada, scoring a hat trick and five points. Hats flew on the ice for a second time for Canadian captain Maxime Comtois, an Anaheim Ducks prospects, who finished with four goals.

Frost was instrumental in giving Canada an early lead, scoring on a beautiful deke to the backhand in the first five minutes…

…before setting up the second goal minutes later.

Canada led 3-0 after the first period and 8-0 going into the third.

Eighteen of Canada’s 20 skaters registered at least a point. Even goaltender Michael DiPietro got on the board, earning the second assist on the 5-0 goal.

DiPietro wasn’t busy, but did have to make a couple of difficult saves early. The Canucks draft pick also had to stop a penalty shot in the third period, which he made look easy.

And here are the first highlights of the host team. Canada (@HC_WJC) blanked Denmark (@DKIshockey) 14-0 to start the #WorldJuniors! #Represent More from the game: https://t.co/bvwhwjEpZr pic.twitter.com/4wvaxMPDVs

Canada will get a stiffer test in their second game of the tournament against Switzerland, who pushed the Czech Republic to overtime earlier in the day. Canada-Switzerland begins on Thursday at 5 pm PT / 8 pm ET.