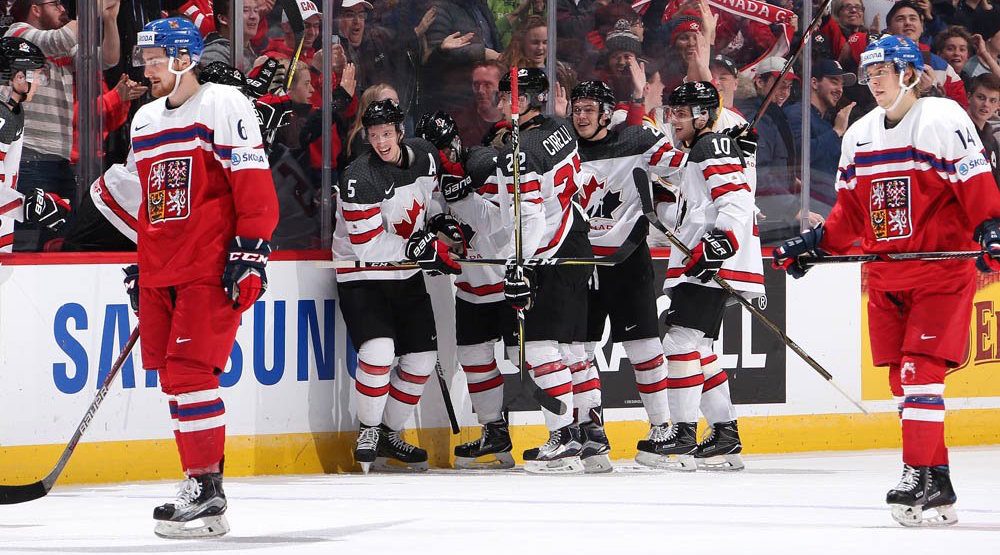 Having just suffered their first loss at the World Juniors against the USA on Saturday, Team Canada had a day to lick their wounds before their quarterfinal match-up against the Czech Republic.

The game would be a far cry from the 5-0 drubbing Canada gave the Czechs in pre-tournament action. Having to overcome a bad bounce leading to an early deficit and shaky goaltending throughout, Canada held together to beat the Czechs 5-3 and advance to the semifinals.

Team Canada has been dominating most of the weaker teams at the World Juniors, so it was a bit of a wake-up call when the Czech Republic opened the scoring in this one.

Kase scores after a nice assist by the referee. 1-0 Czech Republic. pic.twitter.com/10jFXrQG68

It was Ondrej Kase putting the puck past Connor Ingram with a little help from the referee.

Bad luck for Canada, who found themselves down 1-0 after the first period despite leading 11-3 in shots.

You knew Canada wasn’t going to let a goal like that define the game, and they went to work in the second period.

Canada outshot the Czechs 10-0 in the first seven minutes before finally beating goaltender Jakub Skarek. It was birthday boy Blake Speers – who turns 20 years old today – getting the goal.

Of course they wouldn’t stop there, taking the lead a few minutes later. After all, Team Canada goals are like potato chips, you can’t have just one.

It was another goal from Canada’s bottom-six forward lines, with Mitchell Stephens scoring right off a face-off for his first goal of the tournament.

Teams continued to trade chances in what ended up being a very entertaining second period.

After Canada dominated the first half of the period, the Czechs finally got a chance to bring it the other way, and Tomas Soustal’s snap shot beat Ingram to tie the game at two.

It was the first shot for the Czechs since scoring their first goal.

Not to start a goalie controversy, but I think Carter Hart would’ve had that one.

The tie didn’t even last all of five minutes before Thomas Chabot scored a beautiful goal for Canada, putting them back on top.

The score would stay 3-2 heading into the final 20 minutes.

Canada puts it away

The trend from the second period carried into the third, which meant more goals for everyone!

First, Julien Gauthier scored in tight to double the lead for Canada.

The Czechs refused to go away quietly though, and Simon Stransky scored on a big rebound to cut Canada’s lead to just one.

Fortunately, Canada had the answer once again. Less than a minute after the Czech’s third goal, Gauthier scored his second of the period to restore the two goal lead for Canada.

From there, Canada would settle things down and kill the clock, allowing just one shot after taking the two goal lead.

It was a textbook effort from Canada’s forward corps throughout the game. The offense made it look easy, seemingly generating a goal whenever it felt as though they needed one.

That's a good win for Canada. Some things went wrong. But they persevered nicely. Sweden is next Wednesday in the semis at Bell Centre.

Team Canada now has a day off before they face Sweden in the semifinals on Wednesday at 4:30 pm PT. If they win, they play the winner of the USA-Russia game for the gold medal.

WHAT A GAME it was! Watch the highlights of Canada’s 5-3 quarter-final win over the Czechs at the #WorldJuniors. @HC_Men @HC_WJC @narodnitym pic.twitter.com/Y4Zc7MiF4f