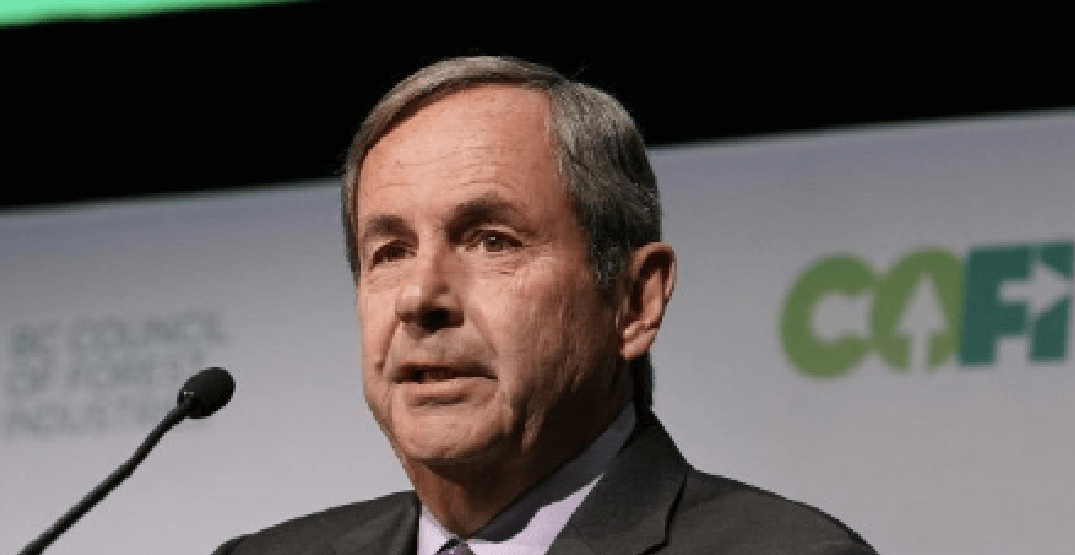 On Thursday, Canada’s ambassador to the US is quitting his position to return home to Toronto and take up a position “in the private sector” at the end of August.

In a statement on Thursday, David MacNaughton called the moment “bittersweet” and said his decision was not one that he made “quickly, or lightly.”

MacNaughton said he “had long planned to complete my work ahead of the fall election.”

This, he said, included work done “following the lifting of steel and aluminum tariffs – something I was absolutely determined we would get done before I left this job, and Congress’s rising for the summer.”

He called his time a Canada’s Ambassador “the greatest honour” of his life.

In response to MacNaughton’s decision, Prime Minister Justin Trudeau said he accepted the ambassador’s decision with “great affection and gratitude – and of course, considerable regret.”

He called MacNaughton a “trusted advisor, friend, and counsellor.”

MacNaughton, he added, “is a Canadian patriot – one whose honesty, moderation, and wisdom were pivotal to Team Canada in our successful renegotiation of NAFTA in 2017 and 2018.”

For this, Trudeau said, “he has earned every Canadian’s gratitude.”

Today, I am announcing that I will complete my term as Canada’s Ambassador to the United States at the end of August.

I will at the end of this month be returning home to Toronto and taking up a new challenge in the private sector.

This is not a decision I have taken quickly, or lightly.

I had long planned to complete my work ahead of the fall election, particularly following the lifting of steel and aluminum tariffs – something I was absolutely determined we would get done before I left this job, and Congress’s rising for the summer.

And yet I must say, the moment is bittersweet.

Serving as Canada’s Ambassador in Washington, at this pivotal time in our country’s history, has been the greatest honour of my life.

Doing so under Prime Minister Trudeau – who leads our country with strength, wisdom and calm, including through the most difficult and uncertain trade talks in our history, has been a privilege. One I will never forget.

But the time has come to return home.

As I say this, I cannot help but recall the dire situation we faced in early 2017, with Canada’s most important trading relationship in grave peril. And hundreds of thousands of Canadians’ livelihoods hanging in the balance.

Challenges of course remain. But the overwhelming sense of uncertainty overhanging NAFTA – our farm exports, our resource industries, our manufacturing sector, our auto sector, and so many others – is gone. That is a source of great personal satisfaction to me.

I am very proud of the agreement we struck. In NAFTA 2.0., we achieved our first objective – the safeguarding of thousands of Canadian jobs, tariff-free access to our most important markets, indeed Canadian economic security itself.

But we also set a new standard for free and fair trade. This is a more progressive trade deal than the original – one that can serve as a model for agreements yet to come – just as the original NAFTA served as a model, in its time.

U.S. steel and aluminum tariffs, unacceptable from the day they were first imposed, are gone, as of last May.

This too was the result of unrelenting effort, especially by the Prime Minister.

I must say that I always believed, as did the Prime Minister and Minister Freeland, that Canada would be successful in having these tariffs removed. We only needed to stay strong. We did.

Since NAFTA 2.0 was signed last November and began winding its way through the legislative process, I’ve heard some say an agreement was inevitable. Well, it didn’t look that way to me.

Or perhaps, after the fact, victory always looks inevitable to some.

The reality is that in early 2017 Canada’s most important trading relationship, our economic security itself, was on the precipice. In early 2018, with negotiations at an impasse, we were preparing for every eventuality. Our team worked around the clock and 24/7. I can’t count the sleepless nights. Not just for me – but for all of us who worked on this.

What was required, and what Team Canada delivered, was unity and resolve.

I have often spoken about our Team Canada approach. It is important to me today to mark it again.

In crafting our strategy, the Prime Minister and Minister Freeland were pivotal. I will be forever grateful for the faith they placed in me. And for the common sense and determination they brought to bear in leading our team, the finest negotiators in the world.

We succeeded at the NAFTA table because of personal diplomacy, across the border and across the political spectrum, both here and in the U.S. And because of the unrelenting effort of literally hundreds of dedicated Canadian public servants, including my own staff here in Washington. We stood firm for a good deal, not just any deal.

To my Deputy Kirsten Hillman, lead negotiator Steve Verheul and the rest of the Canadian federal team, I want to extend my personal thanks. To the Premiers, the many MPs of all parties, and the business and labour leaders as well as Minister Freeland’s NAFTA advisory council, who all were supportive of our efforts, this wouldn’t have happened without you.

I specifically want to thank the hard working team at the Canadian Embassy in Washington, D.C. and in offices across the United States. And I can’t thank my personal staff enough, particularly Pam Saunders.

Lest this be considered a premature victory lap, let me add this.

There remain considerable challenges to NAFTA 2.0, as I have said. Most obviously, the agreement has yet to receive approval from the U.S. Congress.

I expect it will pass Congress, in due course. Nine million U.S. jobs depend on trade with Canada, and we are the largest export market for two thirds of American states. I believe common sense is a human, not just a Canadian, trait.

But equally important, I hope we will take away from these past two years these lessons:

First, that we absolutely must never rest on our laurels – but rather always seek to push further into new markets and new opportunities, around the world, while ensuring we retain our access to our most important market, the United States.

Secondly, the preservation of our most important relationship, with our neighbour, friend and ally, the United States, whether commercial, cultural, or political – will always depend, as they did in the NAFTA talks, on personal contact and relationships.

We demonstrated over the past two years in particular, that when we work together as Canadians we can achieve things few thought possible.