Canadians are among the most progressive countries in the world when it comes to a woman’s right to choose, according to a new Ipsos Reid poll. About 57% of Canadians believe a woman should be allowed to have an abortion whenever she decides she wants one, up from 36% in 1998.

The global average among the 23 countries polled is 45%.

Only 3% of Canadians believe abortions should be not allowed, no matter the circumstances of the pregnancy.

The poll shows that public opinion has had an apparent shift in the last 20 years when it comes to abortion rights.

Since 1998, there’s been a steady increase in support for abortion accessibility amongst Canadians, but over the past year, researchers found that there has been a significant increase (9%) in people who say women should be allowed to get abortions whenever they want.

Canadian men and women share nearly equal opinions on the topic, with 57% and 58% showing support respectively. People who live in the prairies are likeliest to be supportive at 72%, with B.C. coming in at number two with 66%.

Sweden is the most progressive country when it comes to a woman’s right to choose. 84% of Swedes believe abortions should be allowed when a woman decides she wants one. 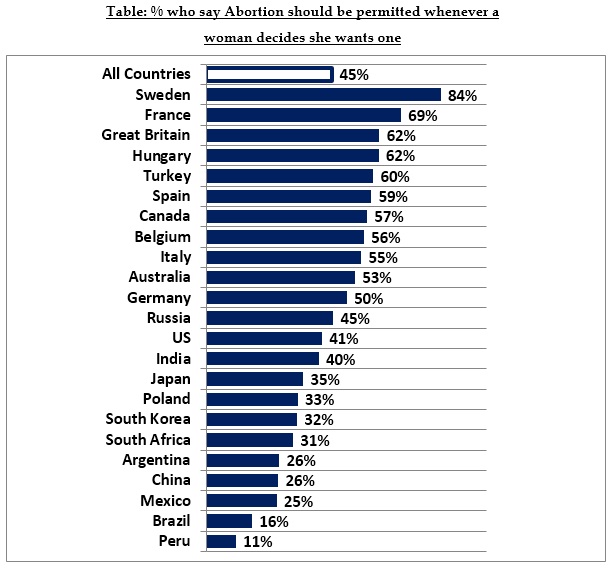