Thought we’d give you an update on what’s happening with Vancouver’s most interesting artery, the Cambie Corridor. I say “most interesting,” because the possibilities on how to further develop the thoroughfare are still being debated. Thrown out the window is the conventional densification around only the stations (Canada Line), seen throughout the rest of the Lower Mainland.

The densification is to occur along the entire Cambie stretch, from Marine Drive to Broadway City Centre. Originally calling for 6-8 stories in height, it has recently been reduced to 6 stories due to NIMBY worry. Stations will have much less densification than you would normally expect as East-West routes will have a height limit of 4 stories and single-family housing.

Couple things worry me right away.
1. Who wants to walk more than one kilometre to a station?
2. Lowering height limits means less profits for developers, especially with the LEED Gold requirement, having a direct effect on the quality of construction. 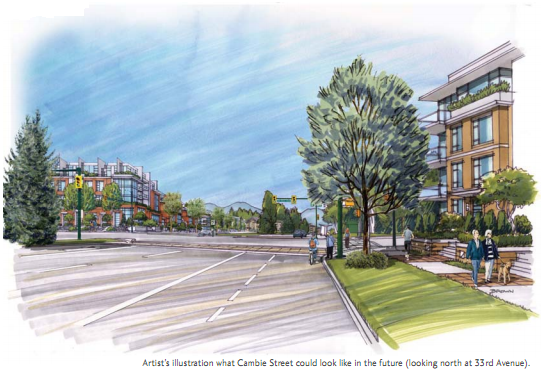 NIMBYs against densification have to remember, their housing values will benefit through rezoning. What’s especially confusing about NIMBYs is the shopowners, who will benefit greatly with increased population in the areas. And both are able to see the character and livability of their neighbourhood maintained.

Densification is environmentally-friendly and will bring higher supply of housing, meaning more affordable options to live in Vancouver… and not the suburbs.

The next phase of Cambie planning continues in the Spring.