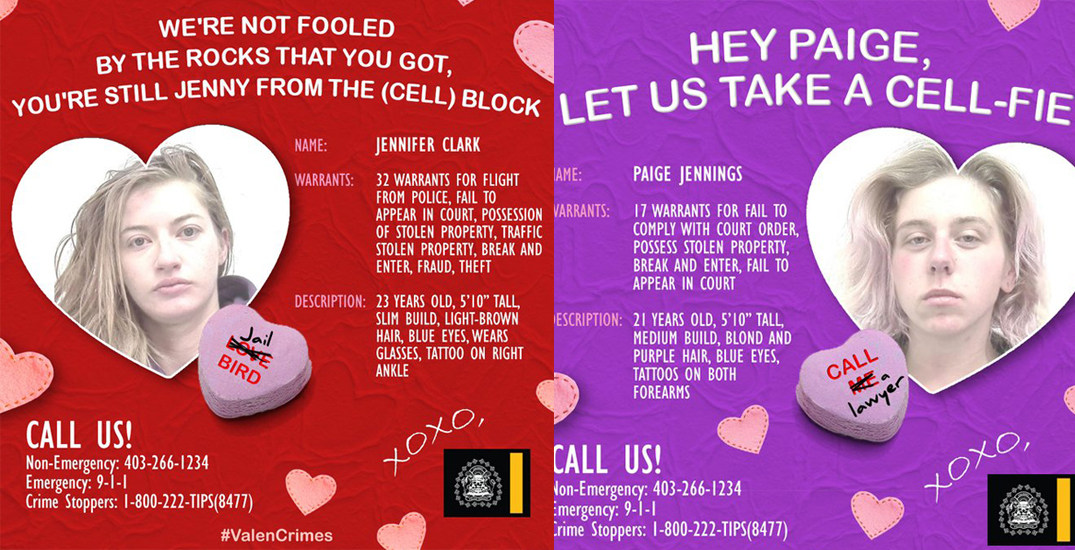 Some are criticizing the Calgary Police Service over Valentine’s Day cards it tweeted out featuring people accused of crimes.

The force tweeted a series of “Valencrimes” cards featuring photos of wanted individuals with their descriptions, what they’re accused of, and lyrics from popular songs.

One featured a 23-year-old woman named Jennifer, and a line from J-Lo’s famous song “Jenny from the Block.”

If you have any information on Jennifer, contact us at 403-266-1234 or @StopCrimeYYC.#Valencrimes pic.twitter.com/GbduhbemIH

But for many, the joke didn’t land.

People took to Twitter to say the “Valencrimes” cards were in bad taste, especially when targeted at people who are already marginalized.

Using humour to degrade people by pointing out their misgivings and turning it into a valentine’s. Humour should never be punching down, only up and there’s no further down than a criminal, likely with addiction or mental health issues. These posters just amplify the problem

No matter what she has done she does not deserve ridicule like this from the police force. I get you’re trying to be funny, but this is a person’s entire life you’re making fun of and belittling. Be better, CPS. Aim higher. Be kinder.

Stuff like this is only funny if you’re punching up. When you, a police force with state sanctioned power, punch down at people, regardless of what they’ve done, it’s not funny, it’s a power trip.

Hey if anyone was wondering why people hate cops, stuff like this certainly doesn’t help.

Kind of heartbreaking really. She’s so young to have gotten into so much trouble. I wonder what her homelife must have been like, what she must have been through to have come to this. People have to attone for their actions, but they shouldn’t be subject to a mob mentality.

Const. Mark Smith, a digital communications officer with the Calgary police, tweeted that the campaign also got lots of positive feedback, and suggested people shouldn’t commit a crime if they “can’t handle the heat.”

well there are literally thousands of positive comments from today’s campaign. I guess as the saying goes, “don’t commit crime if you can’t handle the heat!”