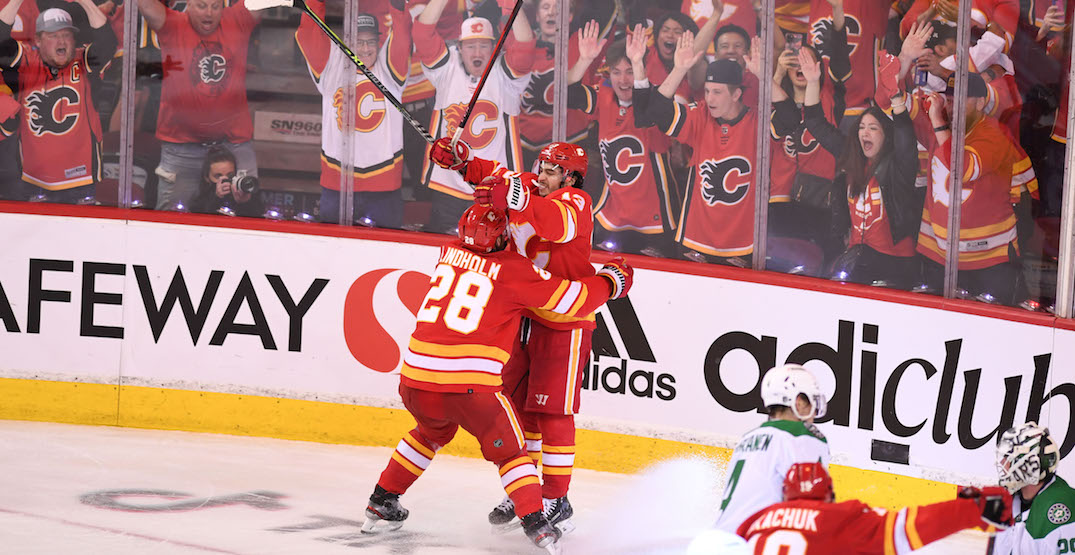 The Calgary Flames are in Game 7 heaven.

Johnny Gaudreau was the hero for Calgary. He scored in overtime to eliminate the Dallas Stars and give the Flames a 3-2 victory, setting up a second-round matchup against the Edmonton Oilers.

As called on Flames radio: pic.twitter.com/OGT80zr32R

The Flames outshot the Stars 67-28, but it looked like Jake Oettinger might steal the series for Dallas.

Flames fans were chanting Oettinger’s name and doing anything else they could think of to try to get into the young netminder’s head.

The game didn’t start well for the Flames. Stars captain Jamie Benn opened the scoring less than a minute into the contest.

Tyler Toffoli’s first goal of the series evened things up early in the second period.

The game was tied for all of 31 seconds before Vladislav Namestnikov put Dallas back on top.

Matthew Tkachuk tied things back up later in the frame with his first of the series.

His brother, Ottawa Senators captain Brady Tkachuk, was at the Saddledome to cheer him on.

"Maybe tarps off, you never know."

Brady Tkachuk is READY to sing Mr. Brightside in the crowd. 🎤 pic.twitter.com/xKzsZDX9qI

The game remained in a 2-2 tie through regulation. After a missed opportunity on the power play and several more outstanding saves by Oettinger, Gaudreau ended things with a sharp-angle shot at the 15:04 mark of the extra frame.

Excluding their Qualifying Round win over the Winnipeg Jets in the 2020 bubble, this was the Flames’ first playoff series victory since 2015.

The Flames-Oilers series will be the first postseason edition of the Battle of Alberta since 1991.