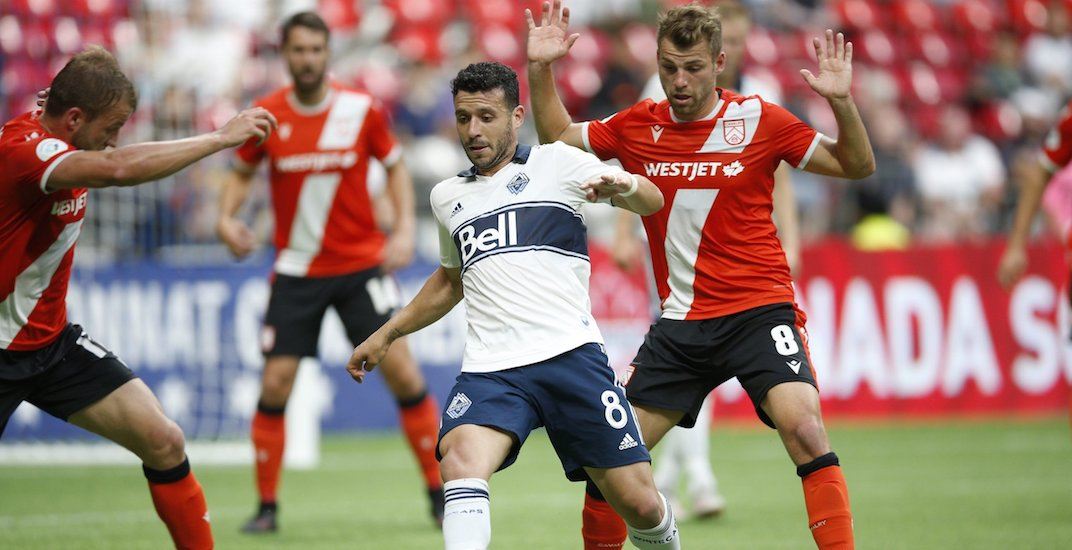 History was made at BC Place on Wednesday night, as Calgary’s Calvary FC became the first Canadian Premier League team to defeat an MLS side in the Canadian Championship.

A brand new team from a brand new league, not many people gave Cavalry FC a chance in this matchup. But a 0-0 draw in Calgary two weeks ago put Cavalry in good position to complete the upset on the road.

Cavalry beat the Whitecaps on their home turf, winning the match 2-1.

Indeed this is a monumental achievement for Cavalry – defeating a more established team from a superior league. But for Vancouver, this is perhaps the lowest point in franchise history since they entered MLS in 2011. It’s also the latest in a series of disappointing results.

The Whitecaps are now winless in 10 matches across all competitions and haven’t won since May 25.

An announced crowd of 16,089 didn’t have much to cheer about as the Whitecaps looked over-matched from the start.

“It was a night that I feel we could have stayed there another two hours and it would have been difficult to score,” Whitecaps head coach Marc Dos Santos explained. “We were the better team on the field, more possession, more in their half, pushed, created. But we missed some empty goals that are almost more difficult to miss than to score, and when those ball don’t go your way it’s like everything is piling on, and it becomes difficult.”

Looking to set the tone early, Cavalry FC did just that with an early goal in the seventh minute. Nic Ledgerwood sent in a long ball over the top to a streaking Jordan Brown, who split Whitecaps defenders Erik Godoy and Doneil Henry and finished with a brilliant strike.

Jordan Brown gets an early lead for Calgary. #CanChamp pic.twitter.com/UzWZsflbDv

From that point forward, a draw was no use for the Whitecaps, who would be defeated on aggregate by the away goals tiebreaker rule.

The Whitecaps were forced into an early substitution when winger, Lass Bangoura, exited with left adductor tightness. Lucas Venuto came on and provided a brief spark on the flank.

Despite having 69% possession in the opening half, the Whitecaps did not register a shot on target in the first 45 minutes. Cavalry FC did well to frustrate Vancouver when they did get forward. The visitors looked composed, organized, and locked in, while Vancouver was disjointed.

“I’m a big believer in psychology and I think what you can see now is [the Whitecaps are] going through a tough time,” Wheeldon Jr explained. “We’re going through a good time. It’s the Mike Tyson one. Everyone’s got a game plan till you’re punched them in the face.

“What I wanted to do was to lay the first punch. Fortunately in this game we did. They’re trying to go through it and you can see that the guys are suffering. We know they’re vulnerable on transition because they overplay. We caught them with that goal. And we know our set plays. We know we had a chance that as soon as it went wide, our tails went up.”

#CanChamp Vancouver get one back… pic.twitter.com/2UcJgAXOlq

Inbeom Hwang gave the Whitecaps some life in the second half, thanks to a goal scored from the top of the Cavalry FC box. The South Korean international had his shot deflect off a Cavalry FC defender, past former Whitecaps keeper Marco Carducci.

“There’s a lack right now of quality in our last third,” Dos Santos said. “If we don’t score enough goals, our defence has to be perfect, and as soon as we concede one goal it’s like a mountain for us right now. I want to congratulate Calgary for qualifying. I think they played us when they’re in a very good moment and we’re in a very bad moment. That’s football.”

A disappointing Whitecaps campaign continues as they continue to lack confidence, structure, and the winning mentality that bonds a team.

Cavalry FC are off to the Canadian Championship semi-finals next month, where they’ll take on the Montreal Impact. The first leg is on August 7 with the return leg on August 14 in Montreal.

The Whitecaps, meanwhile, will travel to Minnesota for their next MLS match on Saturday.