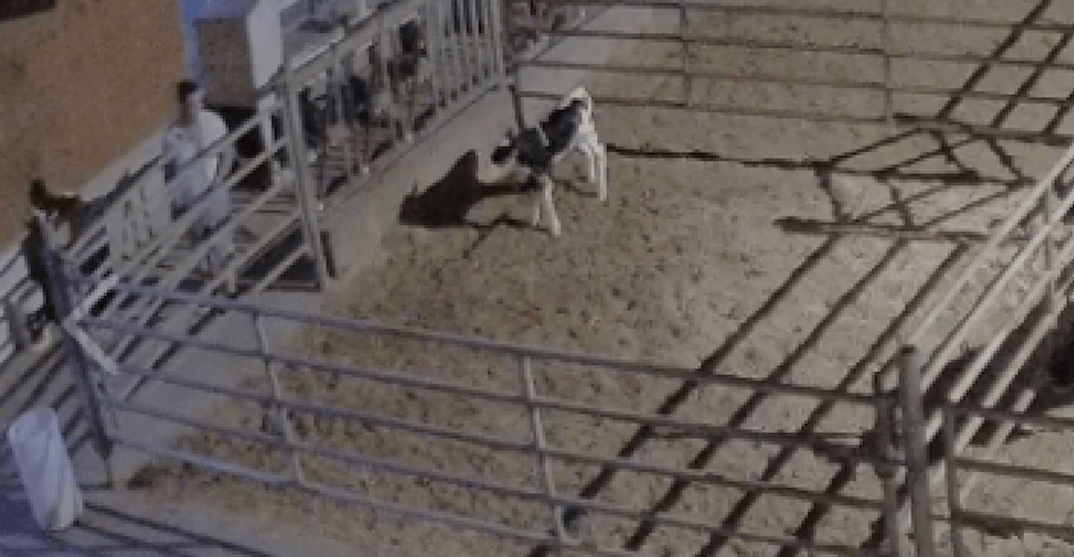 A surveillance video still shows one of the suspects next to the calf that was killed. (Eagle Acres / Facebook

A bizarre crime at a Langley dairy farm was captured on surveillance video recently, and now police are investigating the incident, while the farm’s operators appeal to the public for assistance in solving the case, as well.

On Facebook, Eagle Acres Dairy said the the incident took place on August 1, but that they had debated going public with the incident until this week.

They ultimately decided to do so in the hopes that “someone has information.”

The incident, they said, took place early in the morning hours, when two people trespassed onto the property, and “brutally killed” a five-day-old calf.

“They then loaded the calf into what the RCMP believe to be a high end SUV, possibly a Mercedes or BMW and drove off.”

While the incident was captured on video, Eagle Acres said they decided against sharing the 20-minute video online, calling it “too graphic” to post.

However, stills from the video have been shared, and the farm said that a police file has been opened.

“Unfortunately, these are the best images we were able to get, and couldn’t see a license plate,” wrote Eagle Acres, noting that the suspects in the video look to be a man and a woman, who are both “well-dressed.”

On Thursday, Langley RCMP Cpl. Holly Largy told Daily Hive that police do not have many additional details on the case at this point.

However, she confirmed that the calf “was stabbed with something” and was “taken by the suspects in the trunk of their dark-coloured sedan.”

Beyond that, at this point, she said, “there is very little to go on here, other than surveillance [footage].”

Largy noted that she’s working with the detachment’s IT department “in an attempt to enhance some of the video or perhaps extract some still-photos of the suspects.”

For now, she said she hopes”the movements of the male suspect will be recognizable to someone so we can identify a suspect.”