Café Medina‘s spectacular new location in the Library District has been open since early August. With some time to settle in, the new dishes they’ve added to the menu have easily become some of the best of brunch in Vancouver.

Medina’s Mediterranean-influenced cuisine, as executed by Chef Jonathan Chovancek, shines in a set of new dishes on the expanded menu. Fear not, however, if you are already loyal to Café Medina’s legendary waffles and lavender lattes; like the new space, there is still so much of the old Medina still there, including their signature menu items.

The Fricassée Champignon has slowly eclipsed Medina’s original Fricassée in popularity. Packed with the deep, harmonious blend of sherry-roasted mushrooms, roasted potatoes and caramelized onions in a skillet, the hearty, earthy base is punctuated by vibrant fresh greens, applewood smoked cheddar, and rounded out with a pair of beautiful fried eggs.

Though those aforementioned waffles and coffee can provide a more delicately-flavoured approach to breakfast, Café Medina does not shy away from bold spicing, in particular with their dishes that borrow from the rich tradition and tastes of Moroccan cuisine. 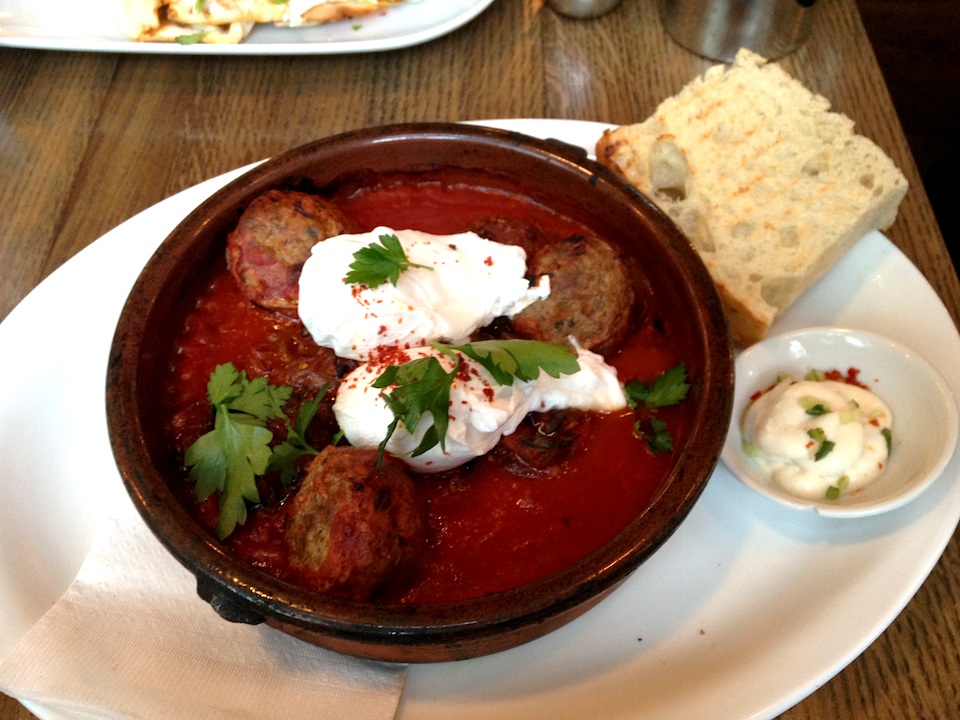 With the “Les Boulettes,” spicy lamb meatballs stud a fiery roasted red pepper and tomato stew. The heat gets a welcome tempering courtesy the creamy unctuousness of a set of perfectly poached eggs. The wobbling orbs perch tenuously until you offer that critical jab that lets their golden yolks free to mingle amidst the stew’s simmering heat. To the side, grilled focaccia and a raita also help soften the edges.

Harissa, the hot pepper paste with roots in North African cooking, provides the bulk of the heat for a dish that has garnered a sort of cult status. The Harissa Pain Plat is a one-of-a-kind concoction that is perhaps closest in kin to a burger, thanks to it’s bread-meat marriage of beef and grilled pita, however with the addition of manchego cheese, tomato salsa, spiced hummus, greens, and fried egg, this bears little resemblance to any burger you’ve had. 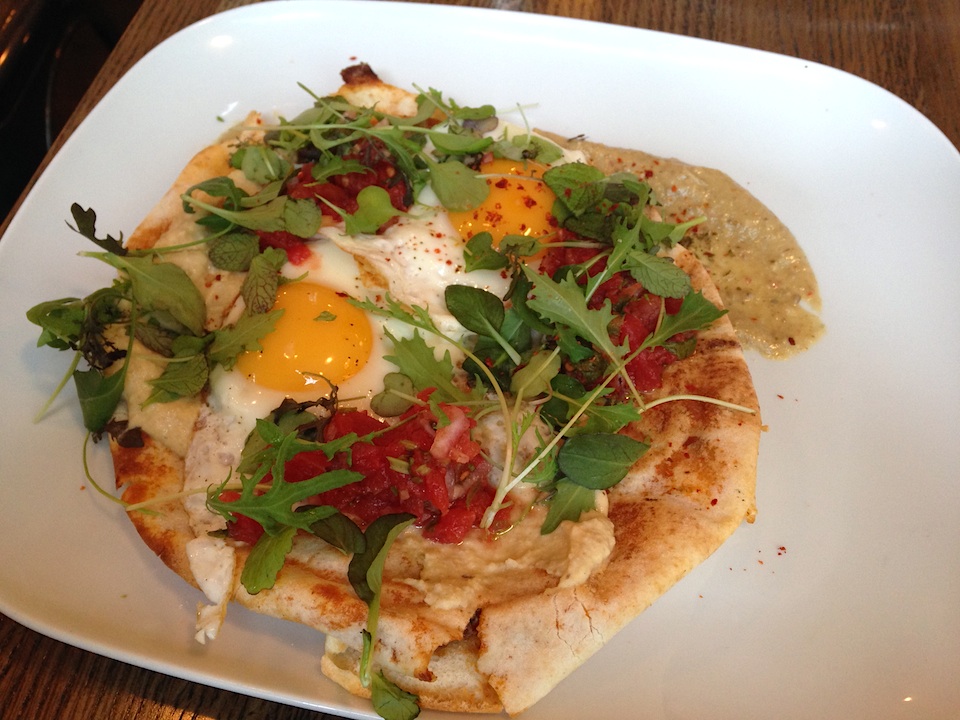 Dive into the Harissa Pain Plat with your knife and fork to spread the egg amidst the meat and garnish; drag your fork through the hummus and spear some greens to make the perfect, savoury, eggy bite. It is messy work, and best tackled with a friend or two–that’s because you’ll want to taste whatever it is they have ordered, too.

The tables are close in Medina’s new space, which, in balance with the tall street-facing windows and high ceilings, give the restaurant a cozy, broken-in, big city feel. Owner Robbie Kane (who assumed sole proprietorship after breaking from his original partners, Chambar co-owners Nico and Karrie Schuermans, as part of the move) enlisted the expertise of his brother, set designer Brian Kane, to give the completely new build an older, established feel with a vibe of 1920s Paris.

Borrowing from a more contemporary trope, much of Café Medina’s menu is, or can be easily adapted to be, gluten free. Vegans and vegetarians will also find they can order easily from Medina’s menu.

One thing that has also remained steadfast despite the move from Beatty Street to 780 Richards is the wait. Expect to leave your name with the hostess and to spend some time staring longingly at the waffles in their display case at the coffee bar while you wait for your table, and decide which toppings you are going to dress your waffles in this time.