The stage is set: an old upright piano, worn rug, various end tables, lamps and curios create what looks to be a bizarre antique store. Oh, and I can’t forget the turkey baster chandelier (it ties the whole room together). That is how Cabaret Brise-Jour (Shattered Cabaret) begins its epic musical take of German composer Kurt Weill.

After a sold-out run of its 2012 creation L’orchestre d’Hommes-Orchestres Performs Tom Waits, the Quebec music-theatre collective returns to The Cultch, this time dipping into the repertoire of Kurt Weill. From Berlin cabaret and Parisian nostalgia to New York’s Broadway, this 8-piece orchestra retraces the path of the musician in exile with rare instruments and music-objects, conjuring Weill’s dramatic and musical world and the best and worst of the human condition.

The performers of Quebec’s L’orchestre d’Hommes-Orchestres, Danya Ortmann, Philippe Lessard-Drolet, Lyne Goulet, Simon Elmaleh, Simon Drouin, Jasmin Cloutier, Gabrielle Bouthillier and Bruno Bouchard play multiple instruments each; guitars, accordions, saxophones, the piano, but they also play unconventional instruments such as a perfume bottle, a typewriter, a champagne glass, an electric hand mixer among others. Try figuring that one out. Somehow using these various instruments (sometimes all at once) they create a cacophony of sound that is both chaotic and delightful.

They also use their bodies to create music, at one point they sing through their hands, another performer has his armpits tickled as he is singing (never thought I’d see that onstage)- but I don’t want to spoil all the fun. Its one of those ‘you won’t believe it ’til you see it’ kind of shows- you really need to be there to see the incredible ways they use props, set pieces and their own bodies to bring Kurt Weill’s music to life. 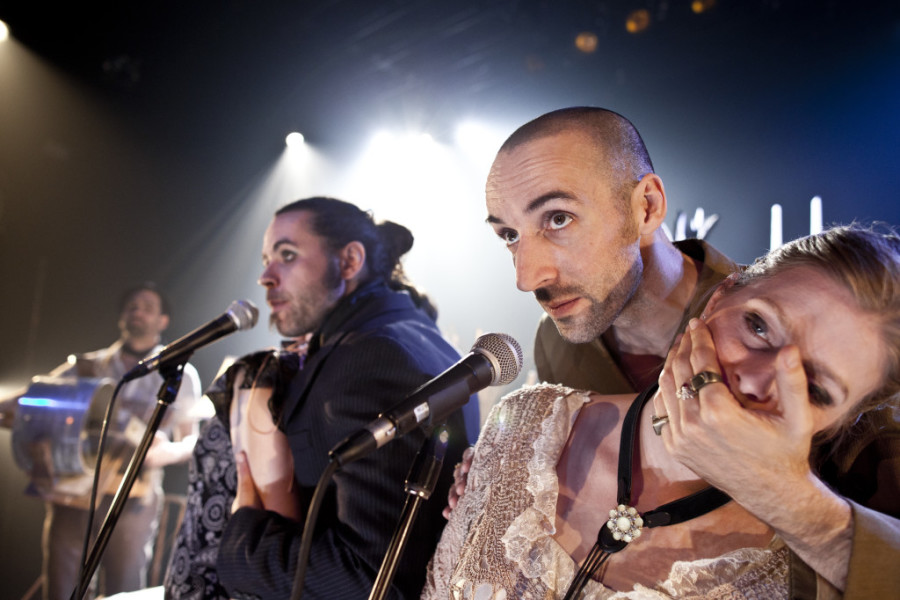 Standout songs include Les filles de Bordeaux, which explores the dichotomy of the male/female relationship, the laundry flinging number Pride, the punked out Big Mole, and Zu Potsdam unter den Eichen, where a female singer is turned into a human phonograph using a sewing machine and a rocking chair. But every person who sees this show will have their own favourite songs, of which there are many to choose from (get a sneak peek at the show on Youtube).

By the end of the show the cast are in various states of undress, the stage is a mess of clothing, instruments and playing cards, and it kind of feels like the end of a very strange party where you aren’t quite sure what happened. But you definitely enjoyed it.

CABARET BRISE-JOUR (Shattered Cabaret) runs nightly at 8pm until April 6th at the York Theatre. Tickets can be purchased here.