Byron Bertram is a street performer, actor, stand-up comedian extraordinaire and a rising star in the Canadian comedy scene. You may know him as the guy from the Nyquil commercial, or maybe you’ve seen him busking around Vancouver as “Byron from England.” I had a chance to sit down with Byron and talk about his start in the industry, how he keeps on his toes amidst crazy crowds, and that one time Judi Dench gave him $20 bucks.

How did you get started as a street performer?

I’ve been doing this for about 20 years, since I was 16 years old. I learned how to juggle in this theatre program for youth in East Vancouver and I just got addicted to juggling, performing arts and things like that. And from then on I just went. A couple of years in, in 1996, I went to Edmonton for the Fringe Festival and that kind of gave me a big boost in confidence, and I just thought it was awesome. Before that I went to San Francisco. The big trip was Europe, three years in. I went to England, Holland, Spain and France. That was my first real big trip.

What do you do in your street performance act?

I juggle fire or machetes, depending if I can juggle fire. It’s easier to get a crowd with fire and it’s more impressive. And then I escape from a strait jacket and chains. But it’s not just the tricks that I do; it’s the crowd interaction, the comedy and the verbal banter that really propels the performance. You need to have a reason to subconsciously hypnotize people to watch you for 45 minutes or an hour. You have to captivate them with what you’re going to do and then around that make it about interaction and comedy and laughter and fun.

I put on this fake British accent, when I’m in North America anyway. I did it as a dare once and then I noticed when you have an English accent, I suddenly got more laughs. I had bigger crowds, I got paid more and it just kind of seemed to add an extra dynamic to my act. I’ve been doing that for a long time.

What memories of your crowd interactions stand out to you?

People saying “that was amazing,” “that changed my life,” or “it was a tough day and it really brought happiness to me when I was feeling down.” Dame Judi Dench came up to me after a show and gave me $20 and said “that was awesome.” But I’ve had bad experiences too – when I was in Holland this guy assaulted me when I was in my straight jacket, he punched me and I had to get out of it really quickly to defend myself. Volunteers pulled him off me and he got arrested. So crazy stuff like that happens – drunken hecklers, just crazy stuff. Little old ladies will run up and hug me, which is hilarious. It’s the best thing about the street, you never know what’s going to happen, it’s so unprotected. And you are vulnerable to circumstances that present themselves, for good or bad and everything in between. Mostly it’s good. But you have to be able to roll with the punches.

What will Busker Fest bring to Vancouver?

Hopefully it will bring more recognition to the arts, and variety arts into the city. And also open up some doors for taking it to cabaret shows. Busking is one of those things people don’t really know what it is. I think the public perception is that it’s the lowest level on the totem pole, which is totally false, some of the most talented people I know are street performers and make a good living doing it, and have an amazing life, myself included. I do stand-up comedy and acting as well. I’m not going to change peoples perception about what I do.

The beautiful thing about busking is that you can have a billionaire and a homeless guy standing beside each other clapping and laughing and cheering at the same stuff. People from all different cultures and walks of life and demographics and ages. You bring them together for a short amount of time, and then they all leave and it’s like it never happened, apart from the memories. It’s a pretty magical amazing thing when you think about it. Guerrilla performing. 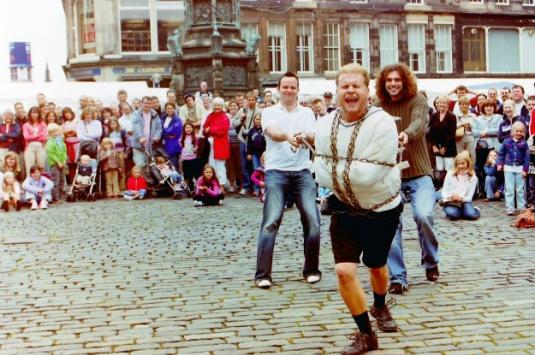 Why should people come to Busker Fest?

You’ll see some world class outdoor street performing that you won’t see anywhere else. Performers from all around the world just bring their amazing skills. It’s a cool thing you can bring anybody to. Whether you’re 100 or you’re five, you’re going to enjoy it. Financially it’s cheap and it’s accessible to everybody. It’s just a great fun thing to do for the day or the weekend. There’s no drawback to it – anybody can come, regardless of income, cultural background or age. It’s cheap and it’s super entertaining.

Come to Busker Fest, enjoy the sunshine, enjoy great performing by donation of your choice. Spread the love! Vancouver needs more support when it comes to the performing arts.