Ever wanted to own a veritable piece of Vancouver history? Now’s your chance.

All Nation Stamp & Coin in Vancouver is auctioning off a genuine letter signed by Vancouver’s famous (and infamous) John “Gassy Jack” Deighton.

The letter was once a part of the Gerald E. Wellburn Collection of Burrard Inlet. Wellburn was a forrester and stamp collector from Vancouver Island, who emigrated as a schoolboy from England in 1911. Moving from logging camp to logging camp, Wellburn collected materials from regions all around B.C., and the old colonial families of the province.

“It began a wonderful collection of Canadian stamps, British stamps, and – what was closest to his heart – British Columbia and Vancouver Island stamps,” Brian Grant Duff of All Nation Stamp & Coin told Vancity Buzz. “All the years he worked in logging camps in so on he continued collecting stamps, and built up amazing collections.”

Wellburn eventually sold his collection in the 1980s for over $1 million. Part of the collection were a number of wine-coloured albums containing letters, legal documents, and other articles, which the company Duff used to work for helped sell. Renowned amongst the stamp and historical document collecting communities, when one of the albums made its way into Duff’s store, he knew exactly what he was looking at. 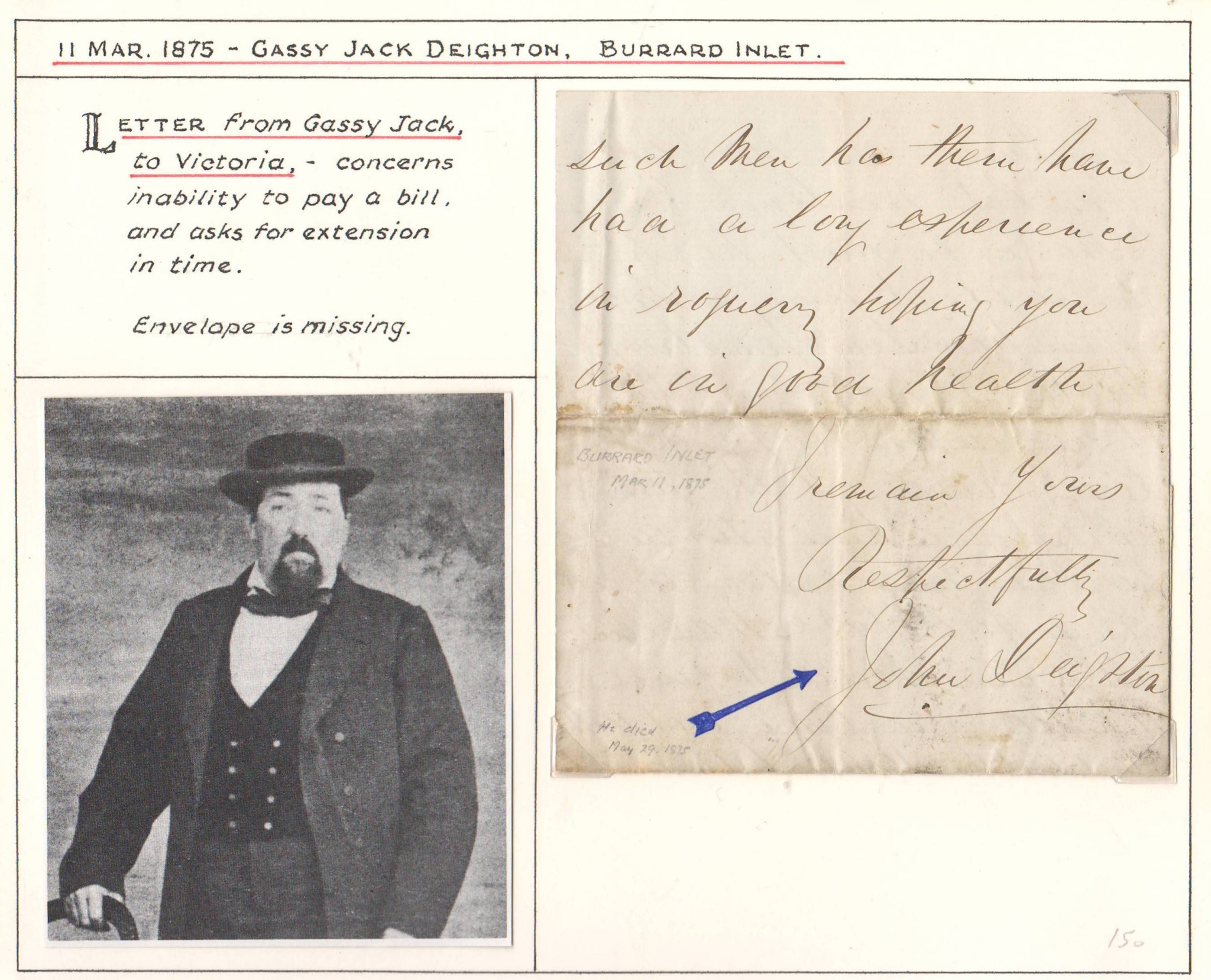 “I recognized it was one of Gerald Wellburn’s albums and said [to the owner] ‘I know this collector, this is an amazing collector, I’ve handled some of his material before,'” he says. “I said ‘I’m in love with this Gassy Jack letter. When you’re ready to sell this let me know.'”

Written by Deighton to a man named John on March 11, 1875 the letter primarily discusses a debt owed to John by Deighton.

“You will think it strange of me not sending you the money I got from you before this,” it reads. “I had it in the bank last fall all ready to pay you, but I had some unexpected bad luck and had to draw it out to pay my debts in Victoria to save my credit, in fact it will take me a year from the time I left the Boat last fall to be in the same position I was last spring, but that is all right. ”

The letter also concerns the death of a man named Jim Armstrong, and a man named Otis Parsons whom Deighton clearly did not care for.

“It is reported here Otis Parsons had a hand in that with other dirty work,” it reads. “Keep your eyes open and attend to business. Such men as them have had a long experience in roguery.”

To learn more about the auction, and the rest of the Wellburn collection available, visit the All Nation Stamp & Coin website.