From its beginnings during the 2010 Winter Olympics, Vancouver Buskerfest has certainly grown substantially throughout the years.

Buskerfest, a festival for the art of street performing, has brought along talent from around the world to our very own backyard. The buskers arriving on the streets of Vancouver are truly astounding and Buskerfest is surely to be a delight. 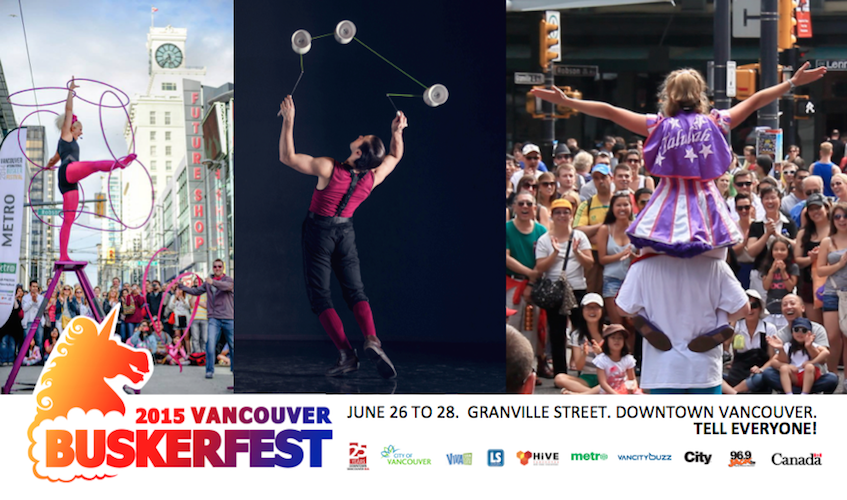 With the festival making its way to town this weekend, here are five things you’ll want to know:

1. Buskerfest takes place in the heart of downtown Vancouver

As Granville Street closes, the entertainers come out. Taking place from June 26 to 28 from noon to 9 p.m., downtown Vancouver will be filled with buzz.

2. Super powered street performers from around the world

The artists are astonishing, and you should go expecting to be blown away.

3. Mass happiness in the heart of the city

The most beautiful thing about Buskerfest is the feeling it brings to the streets. The festival transforms downtown Vancouver from the daily hubbub of honking horns and traffic jams into a sea of happiness, huge and happy crowds, and thousands of people laughing and cheering together. It’s feel good fun for everyone!

With more than 200 free public performances and 20 artists from around the world, Buskerfest has something for everyone, and the festival is totally barrier free – no tickets, no fences, just amazing shows, happy feelings, great photo-ops and wonderful memories.

4. Buskerfest is a new stop on a booming world circuit

Busker festivals are popping up around the globe, from Europe to Asia to Australia and the Middle East. In Canada, Buskerfests have been running for more than 30 years. The largest of the Canadian events – Toronto’s Scotiabank Buskerfest – gathers a million patrons to Yonge Street over its four-day run. After three years, Vancouver Buskerfest is well on its way to becoming a pinnacle event in the heart of downtown.

Between shows, festival goers can enjoy a spectrum of street cuisine from some of the city’s favourite food trucks and vendors. Whether you’re a carnivore, omnivore, herbivore or vegan, there’s something for everyone. In addition to the food vendors, the festival boasts an array of crafters, clothiers, artisans and other nifty merchants (including the sellers of little domesticated marsupial pets from Indonesia).

Where: Downtown Vancouver – Granville Street, between Dunsmuir and Nelson

Vancity Buzz is a proud sponsor of 2015 Vancouver Buskerfest