Here’s a scenario: You order a meal from a delivery service you use regularly, but the food you get this time around misses the mark when it comes to quality. You drop the business a short note to let them know what the issues were with your order and that you were disappointed. The business replies, saying it’s hard to believe there was a problem with the order, critiquing your complaint, and instructing that you “be considerate” the next time you interact with them.

This scenario isn’t made-up, however; it’s an experience a Vancouver woman named Alicia had with a company called Breakfast Courier. The kicker: When Alicia shared her email and response on Breakfast Courier’s Facebook page, the company commented that they appreciate feedback, but her complaint was “entitled.” A lengthy back-and-forth ensued between Alicia and the company on Facebook, and wasn’t pretty.

I order breakfast from the breakfast courier almost every weekend. Generally really happy and food is always great. However, I was extremely disappointed this time. The toast was wet and soggy from the steam that came from my eggs to the point where they started falling apart in my eggs. The avocado was not ripe at all. Very sad about my Sunday morning Breakfast Courier Experience. 🙁

We go out of our way to make sure that your food is the best quality when it arrives to each customer. In fact we have an expediter who’s sole job is to ensure quality of meals leaving our premises.

Your order took only a few mins to make and less than 10mins to deliver – It’s tough to believe it got that soggy in such a short time. The avocado is hit and miss, if you’ve ever bought avocado’s from the store you would know that the quality is inconsistent – same as every other fruit.

There are real people here passionately making each meal to the best of their ability each day – so you should consider that complaining about the littlest thing also ruins their “precious Sunday morning” as well.

That being said – if you would like a refund, or a new meal delivered to you we’re happy to do so but please be considerate if and when using our service in the future.

Did an intern go rogue on the Breakfast Courier email and Facebook? Or does this Vancouver company really want to call out their unsatisfied customers as “entitled” on public forums like Facebook?

In the age of social media, complaints crop up on the nanosecond on platforms like Twitter, Facebook, and Instagram. Customers tag companies, or post on their pages, and when the company replies, it’s an opportunity to not only make that one customer feel better, but also keep the ever-watchful public on the business’ side. There have been some historic customer service flubs in recent times, or business owners who pound the keyboard and let fly whatever they want (Arizona’s Amy’s Baking Company and their disastrous appearance on TV’s “Kitchen Nightmares” would be a prime example of this).

Things spiraled out of control pretty swiftly on Facebook. Alicia posted her email, response, and some commentary on Breakfast Courier’s page. Readers chimed in, as did the Breakfast Courier, and ultimately it was Alicia and the company going back and forth, reaching some pretty epic lows, including a dissection of the service’s target market, past promo campaigns, and the company calling out Alicia for “#firstworldproblems” and ultimately accusing her of “cyber bullying” them. Because Alicia has opted to modify her privacy settings, the post no longer appears on the Breakfast Courier page, however we do have screenshots of some of the exchanges: 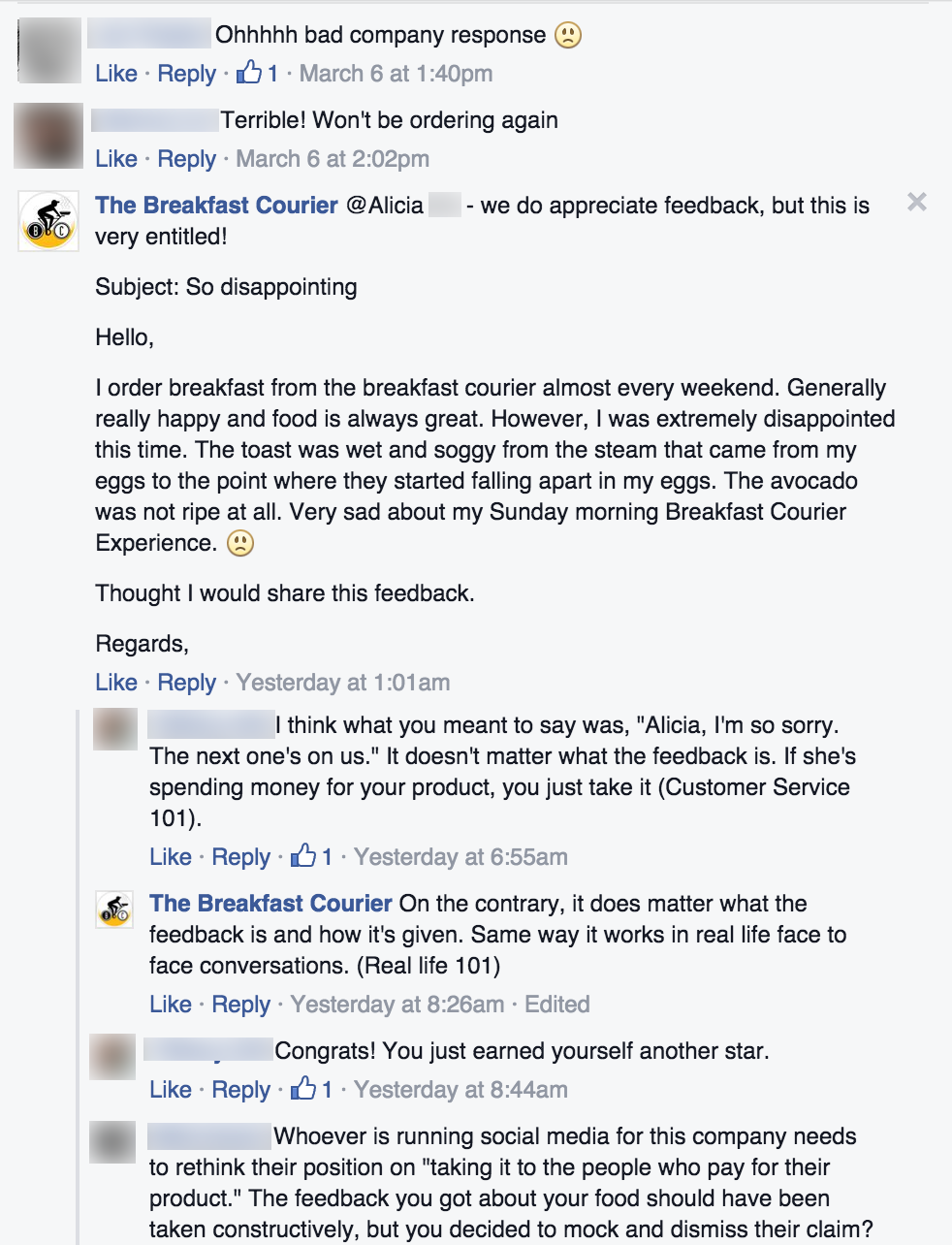 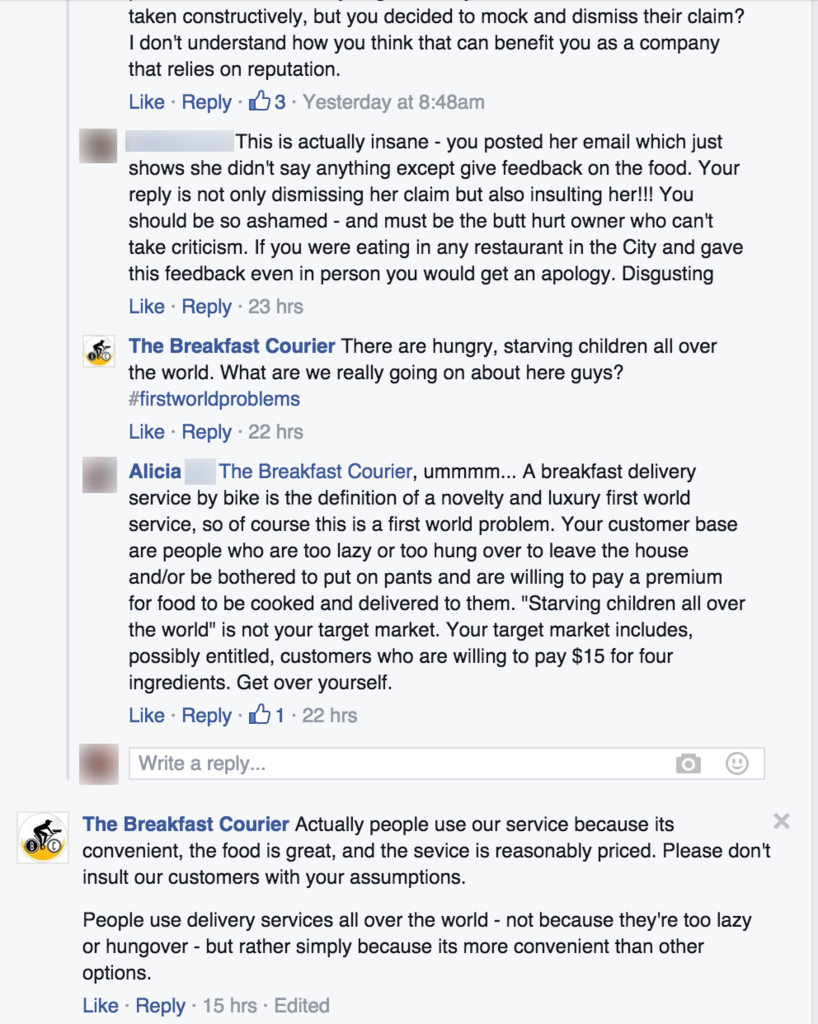 Alicia told Vancity Buzz via phone that she opted to send of her complaint email because this particular meal was “very inconsistent” with her previous experiences ordering from the company. “The quality did not merit what I had paid for,” she added. She was floored by Breakfast Courier’s response. “The entire email is snarking. It made me feel like I wasn’t valuable as a customer, and it villainized me,” explained Alicia, adding: “Not only did they say I was lying, they were really condescending.”

She said she turned to the company’s Facebook at the urging of friends with whom she’d shared the emails, and she continued to reply back to them in her pursuit for the company to demonstrate accountability. Alicia calls their comments “such a blatant disregard for their customer. It was just so personal. They took it to such an offended, personal place.”

Getting the company’s side of the story

I reached out to Breakfast Courier in an attempt to unravel what happened here. While I’ve personally never had contact with them or used their services, in January 2014, Vancity Buzz was the first outlet to write about their “gourmet breakfast delivery” service, in a widely-shared article. I sent them an email via their website for a media request to discuss the incident for a possible story. Not too long after, they called me at our office.

For Jay, the issue here is that Breakfast Courier is run by “real people.” These people are humans, who work hard to get the food prepared, packed up, and delivered fast and tasting good. Jay’s objection to Alicia’s email was that she was “unrealistic” in her expectations, and he objected to her implying that her unsatisfying meal ruined her Sunday–although in her email, Alicia says merely she was “very sad” about her “Breakfast Courier experience.”

Jay added that they’ve had “problems with people who like to voice their opinion,” as well, though Alicia was not a frequent complainer, and starts off her email noting that this delivery was an anomaly. “We get a ton of customer complaints all the time,” adds Jay. “It’s food so it’s to be expected. We’ve also seen really nasty feedback,” though when it comes to Alicia’s email, he says he “wouldn’t call it really nasty.”

“Based on what I’ve seen–what the customer wrote–I would describe it as such,” affirmed Jay.

I asked Jay if Breakfast Courier has a social media and/or customer service policy, specifically if that policy would cover etiquette for calling out customers on Facebook. “We don’t have a policy on terms,” explained Jay. “Obviously we aren’t going to be insulting people or using cuss words. I wouldn’t say that ‘entitlement’ is a word that is a no-go.”

Then things get a little weirder…

Ultimately, though, Jay refused to comment on whether Breakfast Courier felt right in calling Alicia’s email an example of “entitlement.” Instead, Jay suggested he was “not the right person” to answer that, and requested someone else speak with me. Soon after, I received a call from “Megan,” who also declined to provide a last name, and who asserted she is “one of the owners” of Breakfast Courier. (A “Megan” is mentioned in an earlier article about Breakfast Courier as the company’s dispatcher; it is unclear what her stake in the company is.)

Megan also said she was “not really going to comment,” about the appropriateness of calling Alicia’s feedback “entitled.” Rather, Megan stressed that they “take feedback about our food seriously,” and have since had the same order Alicia made “tested” to see how they could improve.

But the Facebook post would remain up, unmodified, said Megan, chuckling. “The thing is, our goal is to be responsive to everyone across all the platforms. We responded to her and her friends’ attitude, and their quick negative responses.”

For Megan, too, the issue was that Alicia put the subject line “so disappointed”–both Megan and Jay elongated it in speaking to have a very dramatic extended “o” sound, i.e. “soooooooo disappointed,” and told me that it was wrong of Alicia to accuse Breakfast Courier of ruining her whole day.

And when that happens, says Megan, “it’s not about the food anymore.” (Their explanation of why Alicia’s avocado was unripe is material enough for an article on its own, and includes a lengthy hypothetical involving Jay buying mangoes from a vendor on Granville Island. Don’t ask.)

Ultimately, “we take the feedback very seriously and we will always be looking to grow and become better that way,” noted Megan.

Can a business that makes what some may deem a customer service error like this one grow?

Bring on the expert

We turned to retail expert Ted Topping, who regularly gives workshops and consults businesses on customer service, to see what went wrong here, and what businesses like Breakfast Courier can do to keep customers happy and coming back.

Topping said that it was easy to see that the situation “escalated” quickly on Facebook–and needlessly so. He urges businesses to be proactive in responding to customer complaints, but to keep interactions off Twitter, Facebook, and other online platforms, instead suggesting they pick up the phone and talk to the unhappy customer, if doing so in person isn’t an option–mainly because in email, it’s easy to “misinterpret the feelings.” Case in point: Alicia and the Breakfast Courier.

“The customer isn’t always right,” cautioned Topping, “but as a service business, it’s our job to make them feel like they are right. That’s a subtle but key distinction.” On top of that, a business needs to “understand a customer’s concern in the way they expressed it.”

Beyond that, a company can’t expect to get only customer responses to sound they way they wanted to. “I’d want all my feedback all the same way, but it ain’t gonna happen,” joked Topping.

Topping identifies the four things customers are looking for in any kind of service or interaction:

1. Make us feel special
2. Treat us as individuals–no cookie-cutter solutions, no form letters. Understand the concern of the customer and act accordingly.
3. Show respect to us. Simply respect our opinion, life, time, our judgement.
4. Be knowledgeable. Have an informed opinion about what actually went wrong.

Topping points out that in the case of Alicia’s complaint against Breakfast Courier, the company neglected to hit all four points.

Additionally, customers who are paying for goods or services have an expectation of value, Topping pointed out. Alicia said she wrote her initial complaint from that exact standpoint; as a longtime customer, she didn’t get what she paid for.

In this case, Topping first would urge Breakfast Courier, or any business having a customer service issue, to “accept responsibility, apologize sincerely, and anything else is between the customer and the company.”

Next, advised Topping, businesses should be in the habit of doing what he calls “netting.” This is when they imagine all possible customer service scenarios in advance, and put measures in action “so that the problems don’t ever happen in the first place.”

This incident went from one bad “experience,” as Alicia stated in her initial complaint, to Breakfast Courier losing a customer.

“I will absolutely never be a patron of the Breakfast Courier ever again, nor would I recommend it to anyone. I’d never deter someone from using it, but if someone were to ask me I would tell them about my experience,” attested Alicia.

She also has a wish for Breakfast Courier: “I think my ultimate objective or hope is that this company recognizes their shortcomings and treat customers more sincerely moving forward, for the sake of their own success.”