A number of bus service changes have been proposed by TransLink to connect Northeast Sector bus services with the six new stations being built for the SkyTrain Evergreen Line. The changes will be made in fall 2016 to integrate and realign services in order to feed transit passengers into the region’s growing SkyTrain public transit backbone.

TransLink’s Northeast Sector Transit Plan (NESATP) for the Tri Cities highlights 18 existing bus services that could be affected by direct integration efforts as the services parallel the new SkyTrain extension, which would make the current configuration highly redundant and cost inefficient.

To reflect the new anticipated travel patterns, existing services could see altered routes and increases in service frequency, and up to four new services could be introduced.

This includes a new major limited stop service between Burquitlam Station and Simon Fraser University. The service would operate every 10 minutes during peak hours and every 15 or 30 minutes during non-peak hours.

Some of the most significant changes to existing services will be the elimination of the 97 B-Line from Lougheed Town Centre to Coquitlam Central and 190 peak period service from Coquitlam Station to downtown Vancouver.

While the elimination of the 97 B-Line might seem alarming, the service only carries a small fraction of the the ridership experienced by the 99 B-Line from UBC to Commercial-Broadway and the now-defunct 98 B-Line from Waterfront to Richmond.

According to the data in TransLink’s 2013 Performance Review, the 97 B-Line sees an average of 11,250 daily boardings during weekdays and even less on weekends. This contrasts with the 99 B-Line’s average numbers of 55,000 boardings per weekday, 33,350 boardings on Saturdays, and 25,000 boardings on Sundays.

Similar drastic cuts to B-Line services that parallel new SkyTrain services have been made in the past. The 99 B-Line previously operated from UBC to Lougheed Town Centre until the completion of the Millennium Line in 2002 and the 98 B-Line was entirely eliminated when the Canada Line opened in 2009, allowing a redistribution of the service’s articulated buses to Surrey, Hastings Street and 49th Avenue. Most of the 40,000 weekday boardings on the 98 B-Line were transplanted onto the Canada Line.

“The 97 B-Line duplicates service once the Evergreen extension is in operation and the NESATP recommends its discontinuation,” TransLink spokesperson Chris Bryan told Vancity Buzz.

“Generally, B-Lines are created on our busiest corridors, where demand is highest. They are not necessarily a precursor to a future rail line, but these areas tend to be where we make more investments over time.”

Other changes to the Northeast Sector’s bus network include changes to existing community shuttle routes and the possibility of new bus services, although this is subject to new funding which was denied in the recent transit plebiscite.

A new B-Line or improved service along Lougheed Highway, from Coquitlam Central Station to Maple Ridge and Pitt Meadows, is envisioned over the long-term.

Map of proposed bus changes. Click on the image for an enlarged version. 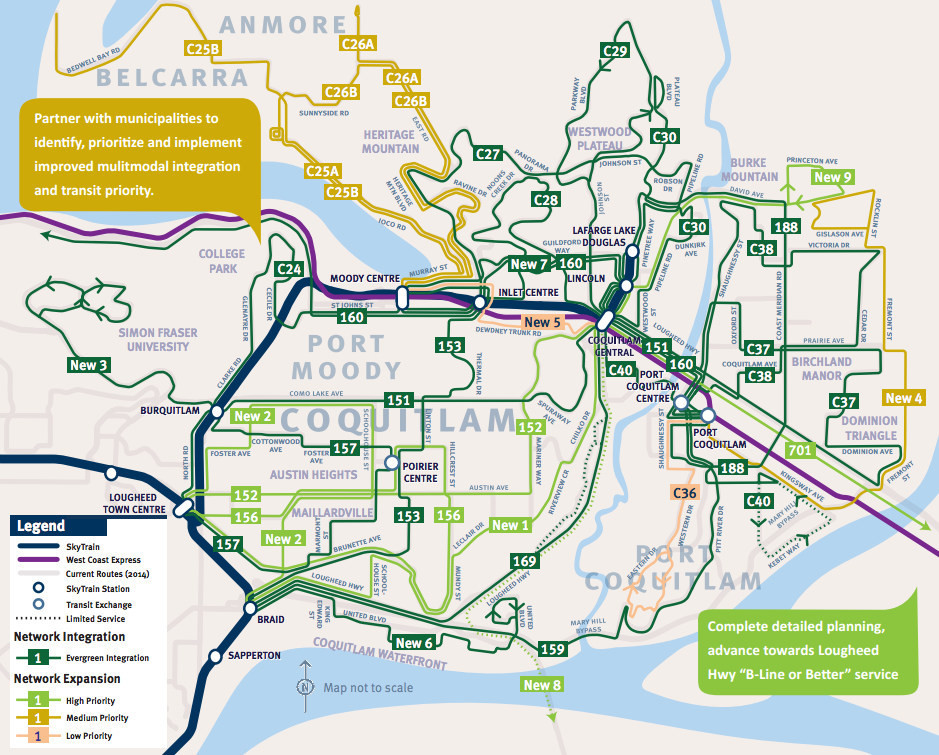