One Metro Vancouver public transit bus has been outfitted with a bus driver barrier for a pilot project to prevent violent assaults on bus drivers by unruly passengers.

TransLink’s Coast Mountain Bus Company unveiled the transparent Plexiglass prototype today, which provides the driver’s seat area with physical separation from passengers. While the barrier is meant to protect drivers, its design does not obscure sightlines and drivers will still be able to verbally communicate.

“The safety of our employees and customers is our top priority,” TransLink wrote on its Buzzer Blog. “Assaults on operators are unacceptable, and can put the lives of many people at risk.”

The barrier project was first announced last summer and will be tested over a six month period to allow drivers to experience the prototype and provide valuable input for refining the final design for the regional fleet of 1,600 vehicles.

Similar bus driver Plexiglass barriers are widely implemented on buses in several other public transit systems, including in New York City, and a number of cities are also considering pilot projects of their own. In addition, manually-driven light rail and subway trains in other parts of the world are outfitted with sealed cabins for security purposes.

The barrier project comes after last year’s spike in assaults on bus drivers, including one incident in March 2014 that involved three young women grabbing a female bus driver by her hair. The driver was pulled to the floor and repeatedly punched by the group of women.

TransLink and Unifor Local 111, the union that represents TransLink’s bus drivers, have advised drivers to refrain from confronting passengers over fare non-payment. Instead of confronting fare dodgers, drivers are supposed to press the “unpaid fare” button on the onboard fare machines.

This button was pressed 2.5 million times by bus drivers in 2011 as one of the several ways for TransLink to track the costs of fare evasion. 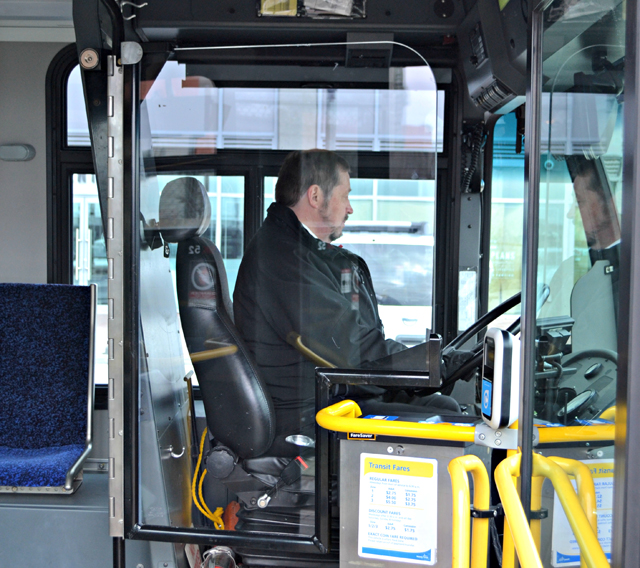