Author’s Note: This story is an update to previous coverage about unusual crowding on Vancouver transit. This time I spoke with Translink’s corporate office for a more accurate view with what’s going on in our transit system. Ken Hardie, Translink Communications, gave me the skinny and I also did some deeper independent investigation. Thanks to the readers who contributed.

Many riders are wondering why they’re being left behind by full buses. Translink admits that it is aware of the unusual crowding since Vancouver went back to work this September. Many routes are seeing increases in ridership on all levels and new delays. The solution to the problem, however, remains unclear as Translink is unable to increase expansion and the new post-secondary U-Pass program will see 20,000 more potential riders in the near future. A new transit commitment by Premier Campbell will also not help the immediate problem.

What was the original cause? It actually begins with the Olympics. When the Canada Line was opened and cars were prohibited from downtown, transit ridership skyrocketed. Ken Hardie, Trankslink Communications, says transit retained its ridership after the event. This “Olympic Effect” influenced almost 100,000 people to keep taking transit. 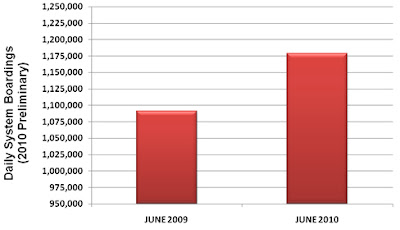 Although no new schools have yet joined the U-Pass BC program, this September saw a significant increase in U-Pass issuance. This pass is compulsory for students at UBC, SFU, Capilano, and Langara. So when Simon Fraser University grew by 3.6% this September, ridership again increased in a greater amount. Before the Olympics, at least 60% of students took transit. That ratio is likely higher now.

However, the new U-Pass BC program allows all post-secondary institutions in Greater Vancouver to join transit benefits. Collectively, this will add approximately another 20,000 riders when all institutions are subscribed. The problem is when the Mayors’ Council on Regional Transportation voted in October 2009 to not increase Translink’s normal expansion rate, it axed many options for Translink to accommodate unusual ridership increases. This can result in no extra buses for new U-Pass riders. Can the system handle it?

On October 1st Gordon Campbell announced to UBCM that he wants to build on Olympic momentum and accelerate the construction of regional transportation projects. His list included a Surrey-Langely skytrain, extending UBC rapid transit, rapid bus service to Chilliwack, but he also neglected the Evergreen Line. However, most of the projects could not be implemented in less than a year and will not be an immediate solution to transit overcrowding. Campbell’s announcement does not focus on basic services such as “more buses” and is more of a provincial visionary push.

Hardie also said that a new “mystery variable” has been affecting travelling East-West. Routes like the 49 (Metrotown-Dunbar Loop-UBC) are seeing unusual traffic patterns near Arbutus that are causing some buses to delay and bundle with others on the route. Even the 25, 43, and 84 have been affected. Hardie says that Translink is working to find the cause, but it could be related to population growth or the Canada Line.

What can be concluded from all of this? Vancouver is becoming one of North America’s greenest cities. With more than half of the metro-population now using transit, Vancouver has changed its character.