Kita Sushi is a small little sushi spot by Gilmore Station. This post combines three or four visits. Start with the Tako Sunomono. The photo on the left is dine-in serving and as you can see, it’s as you would expect. Vermicelli in a vinegar broth, topped with tako, cucumber, seaweed and lemon. In the Tako Sunomono that I got to-go on the right, I had more of everything ~ tako, cucumber, and even vermicelli!

For a touch of Sashimi, we tried their Appetizer Sashimi (image above), two pieces each of salmon and tuna, and one piece of tai. They butterfly the kai and added some ikura. The fish was fresh but the slices were a touch too thick for my tastes. 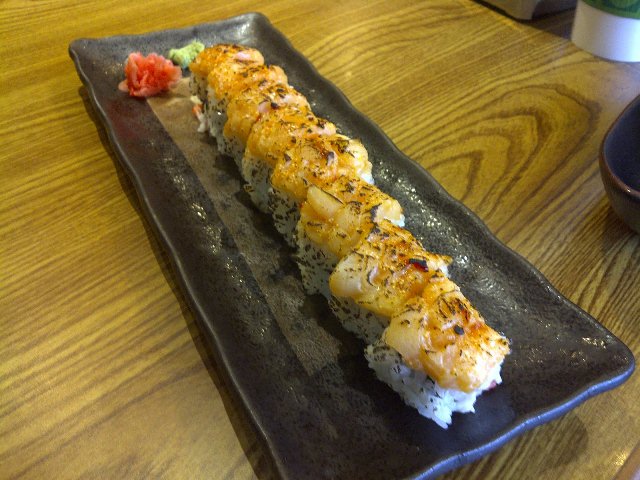 Want something more filling? Try one of their sushi rolls, the Scallop Tataki. It’s a Californian Roll (crab “pollock” meat, avocado and cucumber), add a chopped scallop topping and then torched it. The scallop doesn’t get cooked through, but there are char marks on the topping and rice! Though not a fan of avocado, I liked this roll (after poking out the avocado), and was surprised that a small casual place like this could pull it off.

Ikura is my all-time favourite, and I tried one here during my dine-in experience. Simply presented and freshly made, I thought it was a good serving for $2.50. However, for my take-out order, they fancied it up, with sliced cucumber, diced mint and even a few sesame seeds. Both the take-out items were winning in the presentation department. 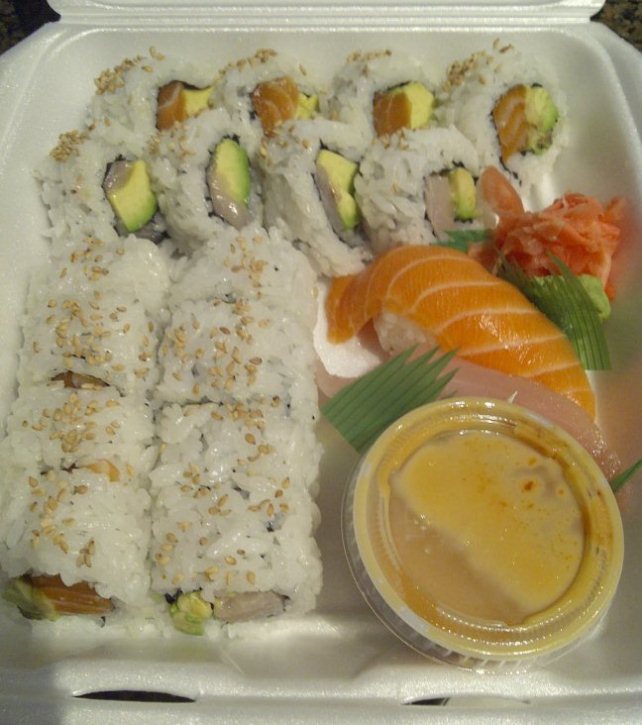 Given the two “wins” from the take-out point of view, I tried them one lazy weekend too. Here is their Spicy Combo – 6 pieces of Spicy Tuna and Spicy Salmon plus one piece each of Tuna, Salmon and Ebi. The sauce you see on the side is the “spicy” factor. I like the care they take to package this separately so the whole box doesn’t end up a soggy mess. 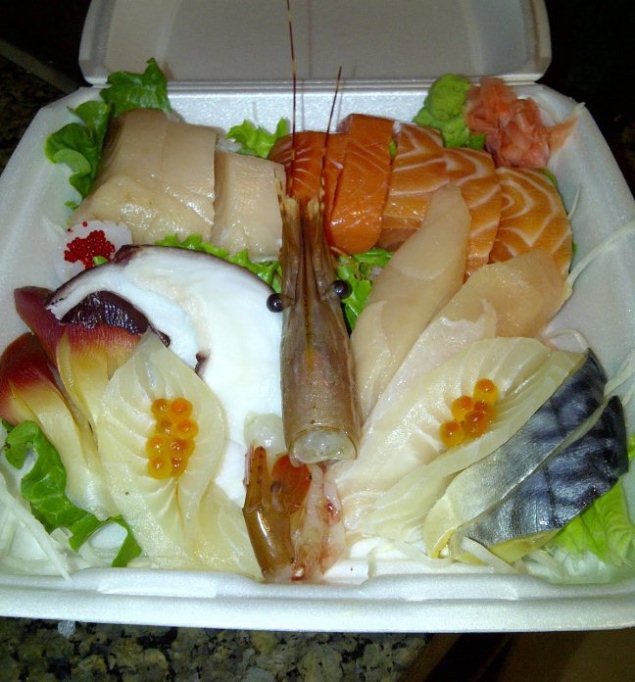 This is their Assorted Sashimi. On the take-out menu, it promises 18 pieces of fish, including Salmon, Tuna and Hokkigai, Toro, Sockeye, Saba, Tai, and even Ika. In my take-out though, I got a few bonuses such as Tako and even an amaebi? Rarely have I been given MORE food than promised but I’m not complaining. This was $16.95, meaning less than $1 for each piece.

So whether you live or work in the area, give this place a shot, if not for the dine-in experience, for the takeout!