Brunch? If you’re like me, trying to have breakfast on a workday is pretty much a case of grabbing a Turkey Sandwich from Starbucks or a BELT from Tim Hortons. But on the weekends, splurge and indulge in a yummy brunch!

This past week, I headed to Biercraft on Commercial for brunch. I had intended to go to Havana (and hope to make it there soon) but my parents had Bier on the brain. 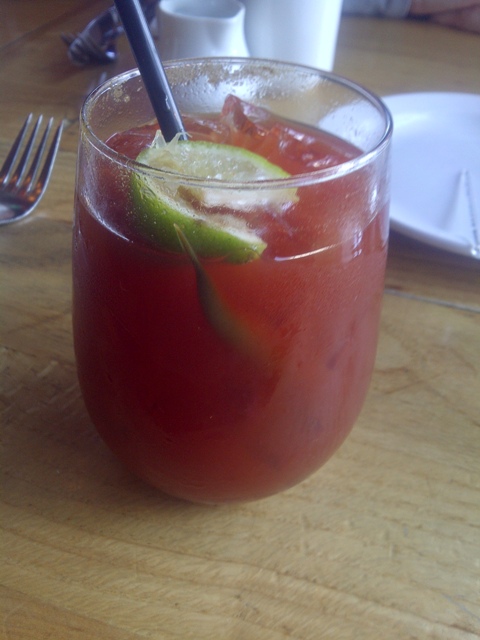 The drink special of the day were Caesars, so that was what I got. Loaded with a lemon, lime and three olives and some pickled beans, this was my veggie serving for the day!

One of us wasn’t a meatlover (the rest of us are ) and ordered the Tofu Scrambler. It’s a serving of eggs with tofu, corn, red & green peppers and a sprinkling of black beans. Also on the plate are some hashbrowns and a cup of salsa, along with a lightly dressed salad. In fact, this salad accompanied all four of our entrees. I found this slightly mild and just a touch too “loose” to be considered a scrambler, but maybe that’s the nature of cooking with tofu? Flavours were decent but definitely benefitted from the addition of the salsa and a splash of Tobasco. They have a chipotle-based version…ask for that! 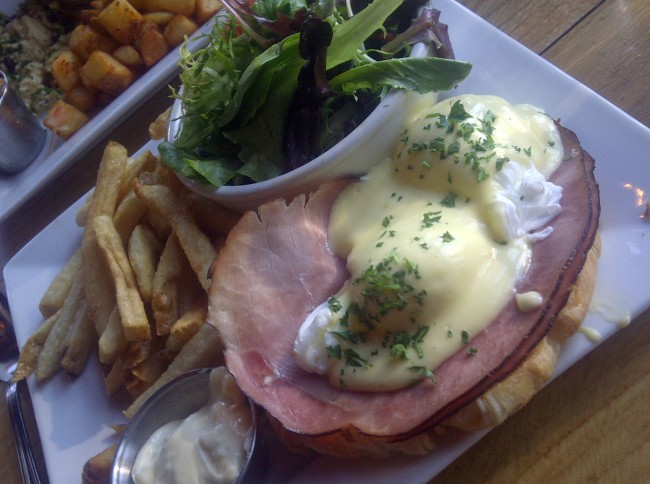 They have several types of Eggs Benedict on the menu. You can try it with Black Forest Ham, Chorizo Sausage and Tomato & Spinach. As meatlovers, we ordered the first two. I tried the ham version, but we also got the chorizo version too. But instead of the hash that accompanied the rest of the dishes, I asked for fries (and boy, was that a good choice). We had asked for the eggs to be poached “soft”, and the waitress said that is how they are made. Unfortunately, when they arrived, they weren’t soft at all. But because we were hungry, we decide to take our lumps and just eat them. I guess we’ll have to revisit and ask for “ultra soft” next time. 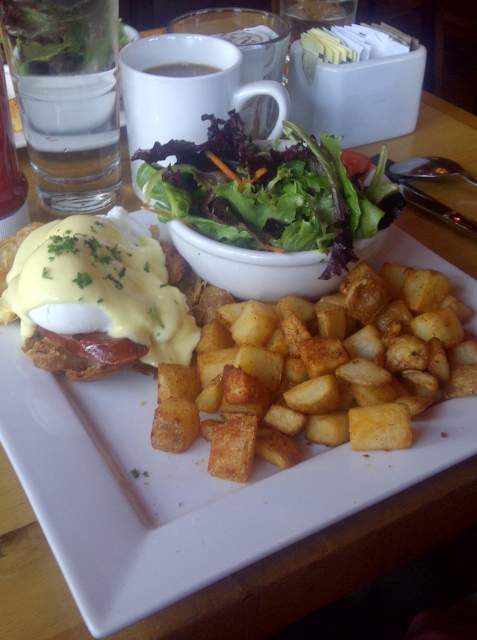 The other version we got was the Chorizo one, but that one was a bit dry, that’s to be expected with Chorizo…but I do have to admit, their hollandaise is really good, and I love the fact that it’s served on a croissant, and not an English Muffin. The fluffiness of the croissant is surprising an much preferred over the doughiness of a English muffin. 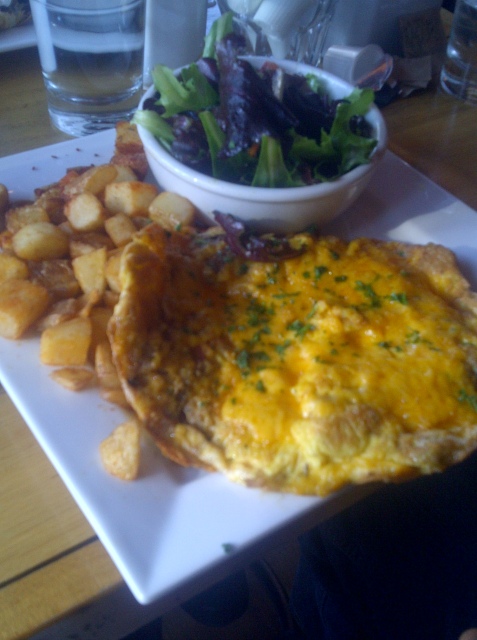 The last dish we tried was the Frittata. Essentially a platter of scrambled eggs, but finished by baking. The one we tried were loaded with Bangers & Mash. Their version of bangers? Andouille sausage…and mash was generous portion of finely diced roasted potatoes. Rounding out the dish were some mushrooms for flavour and cheddar for the gooey factor!

Overall, all the dishes were very filling, tasty and well-balanced. So if you’re ever on The Drive and need a place to eat…pop by for the fun and filling Caesars and the delectable brunch!

Are there other brunch places I should check out? Leave a comment below and I will give them a try!