Brooklyn Clothing owner Jason Overbo says anti-fur protesters that have been harassing his staff and customers since November 2013 are responsible for a new smear campaign against his business.

Over the past few weeks, several job postings were published on Craigslist looking for people who are interested in filling “protester” positions at a “Yaletown Menswear store.”

The advertisement claims this particular store has been making “more profit” by having its controversial protesters just outside its doorstep. It also includes compensation details, which is $50 plus a store discount.

Here is the full text of one of the advertisements:

We are looking for loud, energetic, PASSIONATE protestors to protest the sale of Canada Goose jackets. Ideally, you can work evenings and/or weekends.

Protests attract attention and we have found that our upscale Yaletown Menswear store makes MORE profit when we have controversial protestors. So we need the loudest, most obnoxious protestors we can find. We pay well!

Actors, models, singers, this is a great way to make a bit of cash and have some fun!

Overbo told Vancity Buzz that his business was not responsible for the Craigslist postings.

“Obviously, it was by the protesters. But it is true that we had our best November since we opened eleven years ago,” said Overbo. “I think due in no small part to the obnoxiousness of the protestors… The neighbourhood has responded by supporting the store.”

Members of the Vancouver Animal Defence League have been protesting outside the store at 418 Davie Street for at least once a week over the last year. They are against the retail of fur-based clothing, particularly animals that were killed in cruel and unethical methods.

However, Overbo maintains that their claims are unsupported and based on knee-jerk emotional reactions.

In an open letter published earlier this year, Overbo wrote: “Well, if I believed even half of what you claim, I’d be out there marching with you. But wild, unsupported allegations and horrible photos are not the same as proof. In many cases, you don’t even come close to connecting the dots… you just match a horrific image to an unverified charge, and away you go.”

The protest group’s tactics of verbally belittling and harassing people who enter the store doors or even passersby has also been documented.

Warning: this video contains language that may be offensive to some
[youtube id=”JMdX6KpkKhc”]

One of the Craigslist ads published recently.

Brooklyn Clothing thanks its protesters for its best sales in eleven years – since it opened. 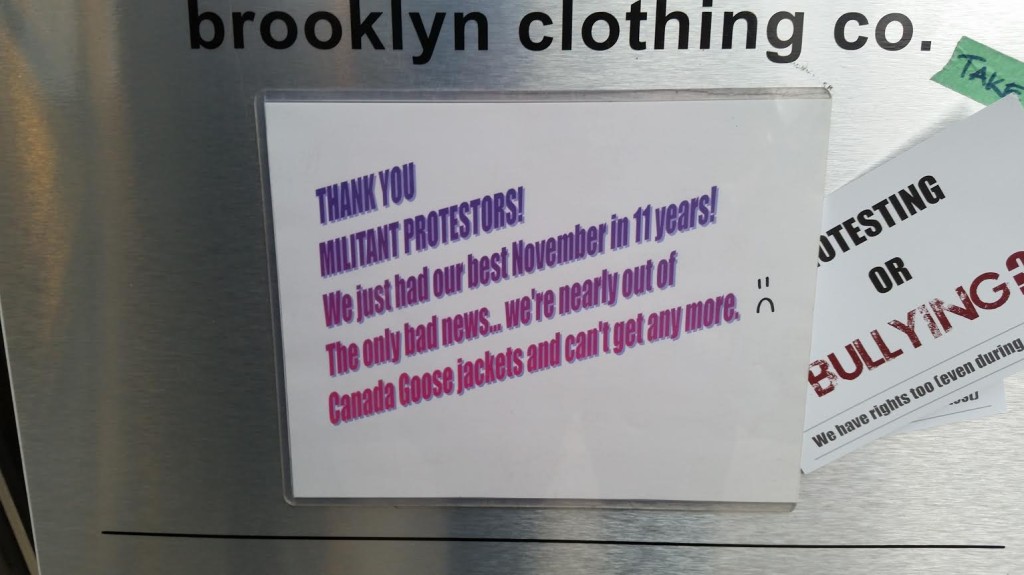