Residents in Metro Vancouver will have a better understanding on the plans for the proposed underground extension of SkyTrain’s Millennium along Broadway in Vancouver and the new light rail transit network in Surrey beginning later this month.

In a press conference this morning, TransLink and representatives from the Mayors’ Council announced plans to commence the public consultation phase for both rail rapid transit projects – the biggest items in the 10-year transit vision. Consultations for the Surrey light rail project begin on January 24 while consultations for the Broadway extension start January 28.

“The heavy lifting on Phase 2 is underway already,” said Surrey Mayor Linda Hepner, Vice-Chair of the Mayors’ Council. “We are in the designing and planning stages of how that will work relative to the Surrey LRT project, the Broadway Corridor, and the Pattullo Project which are the most significant capital investments that will make a true difference in the congestion in this area.”

However, questions persist on how both rail rapid transit projects will be funded, to the extent that elected representatives butted heads at the press conference. The last cost estimates provided peg the Broadway extension at $2 billion and the Surrey light rail project at $2.6 billion.

Short of announcing an exact monetary figure, the federal government previously stated it is willing to fund up to 50% of new infrastructure costs within its transportation funding for Phase 2. With a larger federal allocation, TransLink’s share of the costs has in turn been reduced from 33% to a more attainable 17%, and this leaves the provincial government with a share of the remaining 33%.

“We’re waiting for the Mayors to come forward with the detailed plan, but obviously this type of proposal fits within what we are supporting with respect to infrastructure projects,” said Jonathan Wilkinson, the MP for North Vancouver.

Andrew Wilkinson, the MLA for Vancouver-Quilchena, added: “Once the picture is crystallized and the plan is clear, there will be the usual engagement between the three levels of government over funding arrangements.”

But both Vancouver Mayor Gregor Roberston, who is also the Chair of the Mayors’ Council, and Hepner countered by stating that a detailed plan for both of projects is complete – that the ball is now essentially in the provincial and federal government’s courts, unless the goal posts have been moved again.

“That work is done. We’ve put the plan together, we’ve put a request into the provincial and federal governments,” Robertson asserted. “I’m not sure what the Minister is alluding to, but we need formal commitment of federal and provincial dollars to the major projects.”

“We’re hoping to see those commitments in these weeks ahead as they put together their next budgets. Obviously, budget cycles are imminent, and that is the urgency that we see… commitments that are attached to next year’s budgets so that we can go into procurement formally.”

Broadway extension only up to Arbutus, UBC for the future

The 6 km-long Broadway extension will be a seamless extension of the Millennium Line from VCC-Clark Station, replacing the busiest section of the 99 B-Line. There will be one additional at-grade or elevated station in the False Creek Flats before the tunnel dives south and runs along Broadway towards Arbutus Street. There will be underground stations on Broadway where it intersects with Main Street-Kingsway, Cambie Street (interchange to the Canada Line), Oak Street, Granville Street, and Arbutus Street.

“I wasn’t here when the decision was made to terminate it at Arbutus. I think it is a funding issue and a demand issue,” said TransLink CEO Kevin Desmond. “The real crush on demand on the 99 B-Line now is really to Arbutus. Plenty of customers, students, and faculty and workers going out to UBC, but for this first phase that is really where we need to get our resources.”

“This is just another phase of continuos development of the transit system. Will rail eventually get to UBC? I’d say there’s probably a good chance. When? I don’t know, but for now we need to get to Arbutus and relief a lot of that crowding on the bus services.”

Robertson added that planning for the UBC extension from Arbutus begins near the end of the 10-year vision and noted that there will be much more density in the Westside neighbourhood with redevelopments such as the Jericho Lands.

“If you see the Jericho Lands, that has happened since the 10-year vision was approved by the mayors,” said Robertson. “There is going to be a lot more population growth in the Westside, and UBC continues to grow.”

Light rail instead of SkyTrain for Surrey extension

As for Surrey light rail, the municipal government remains adamant on utilizing street-level light rail technology for the transit expansion. This project’s first phase, also known as the Surrey-Newton-Guildford Line, an L-shaped line, will be 10 kms long and run along 104 Avenue and King George Boulevard, with interchange stations to SkyTrain at Surrey Central and King George stations. There will be a total of 11 light rail stops.

A second phase, the Surrey-Langley Line, is proposed to run along the Fraser Highway. Eight stops will be built along 16 km of track, with short elevated segments over the Langley Bypass and CP Rail Corridor.

Hepner says 200,000 people will be within a five minute walk from the first phase’s L-line while future extensions could bring the trains to Fleetwood, Cloverdale, and perhaps even as far as South Surrey. 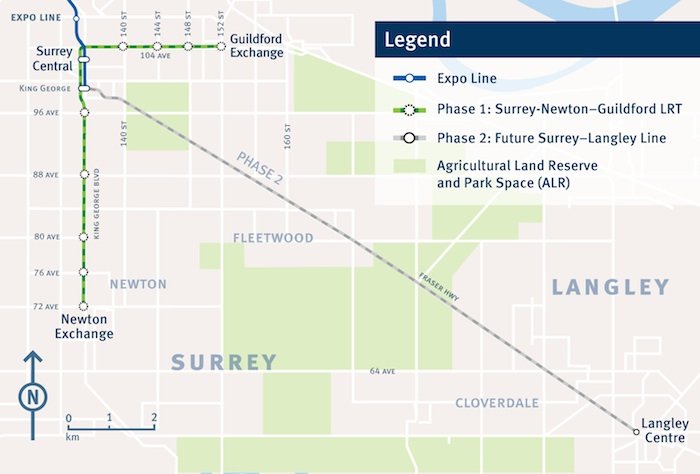 A number of interim transit improvements under the $2-billion, Phase One plan, which was approved by the Mayors’ Council last November, have already commenced including increased frequencies for the SeaBus, Canada Line, Millennium Line, and Expo Line.

“With the completion of the Evergreen Extension in December, and this week’s launch of the first transit enhancements from the 10-Year Vision, Metro Vancouver is starting to see the long-overdue transportation improvements that will get our region moving again,” said Desmond.