It looks like the City of Vancouver is kicking its PR campaign for the Broadway rapid transit into high gear. This is a welcome sign as in the past Mayor Gregor Robertson has been upstaged by our neighbours south of the Fraser, who have been screaming bloody murder for more rapid transit for quite some time. Although, to many on the outside looking in, building rapid transit in the city may only seem to cater to those fortunate enough to live within the city’s borders, however, a closer look would indicate otherwise. Broadway rapid transit is a key priority for the entire Lower Mainland, a need that will only be exacerbated once the Evergreen Line comes on line.

“Frequent, high-capacity rapid transit in the Broadway Corridor is the City’s top transit priority. Without significant new investment, achieving the goals of this plan is not possible.”

The Case for Rapid Transit down the Broadway Corridor

We have all heard that the future is going to be in Surrey, Langley, etc; however, look at the map below and you’ll see that the residential and employment density far exceeds Surrey City Centre’s and the other regional centres in the high growth suburb. So, why not serve DEMAND that is already there, rather than build a line now for FUTURE demand that may or may not materialize for another decade or so? 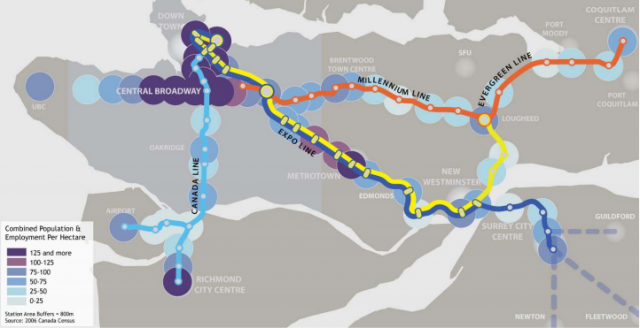 2. The Broadway corridor is the 2nd largest employment centre in the province after downtown Vancouver

The facts speak for themselves. Central Broadway employs more people than Richmond and Burnaby City Centres combined, and yet it is still not adequately served by rapid transit. Furthermore, for all the hoopla about Surrey and Langley, currently combined they rival only Vancouver’s Eastern Core. An Eastern Core that is in the early stages of a revival. Currently combined, Vancouver accounts for 66% of the regional town centre employment. That is a staggering number that can not and should not be ignored by the media when reporting stories about suburban growth and their desire for rapid transit. 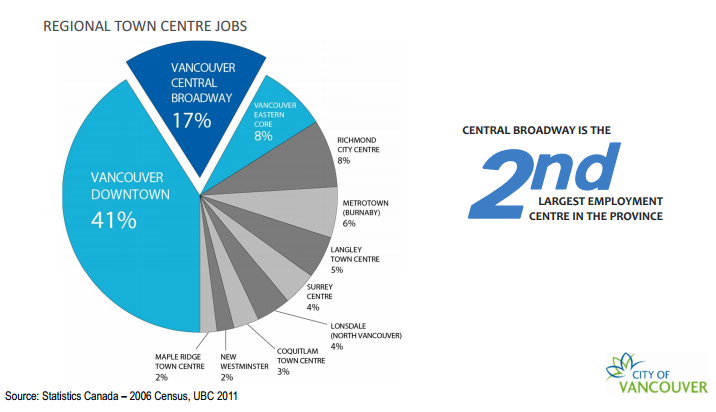 Approximately 2,000 passengers are passed by at Commercial-Broadway Station every morning during peak period. While some accept this as a price of their commute, others will simply choose to travel by car. Combined, both UBC and Central Broadway see 160,000 transit trips per day. Only downtown Vancouver has higher transit trips at 260,000. 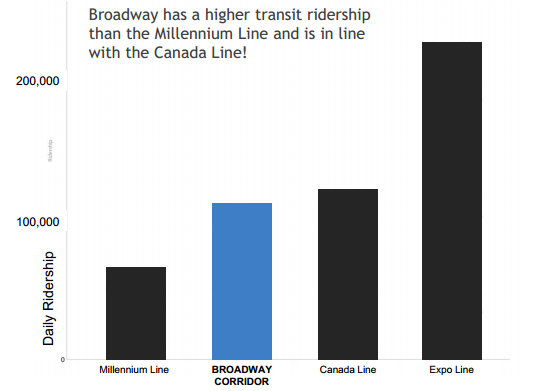 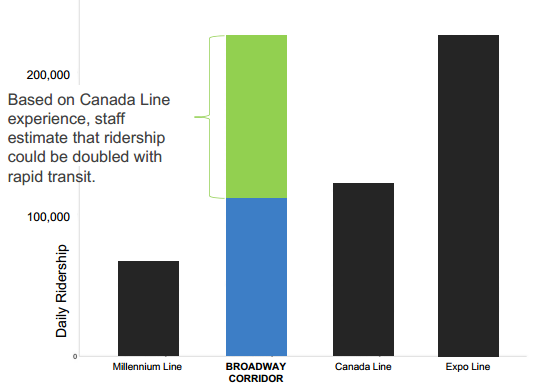 4. A Growing Need for a Corridor Vision: Additional Transit Demand

The Broadway Corridor is only going to grow and with it comes increased transit demand.

The City of Vancouver’s 2040 Transportation Plan targets are heavily reliant on large shifts to transit and solving the Broadway bottleneck is critical in achieving that goal. The key issue of course will be funding. Will the Province and Federal government chip in? Perhaps a case for another P3 (Public-Private Partnerships) can be made, similar to the Canada Line? Only time will tell.

The mayor and city support a bored tunnel all the way to at least Arbutus and then a rapid bus to UBC. However, the line should be completed and built all the way to UBC and UBC should pay for a portion of the cost.

If all goes according to plan we could see the UBC line open up by 2021 at the earliest. By then, the Broadway corridor will be a vastly different place.