There’s just something about Asha. Maybe it’s the endless stack of samosas that greet you as you enter the theatre. Or her undeniable, you-can’t-put-anything-past-me charm. Or the realization that while she’s not a trained actor, Asha clearly steals the show. No wonder they named the play after her. She probably made them.

A Brimful of Asha is about Toronto producer Ravi Jain’s relationship with his mother, Asha. Unlike those of us who simply complain to everyone around us, Ravi goes one step further and airs his family’s dirty laundry on stage. He attempts to build the case against his family’s numerous attempts to marry him off to some nice Indian girl, but he’s frequently derailed by Asha’s interjections that he is a “big liar.” Plus, you know that he isn’t going anywhere when she quietly lets drop that her “heart is crying.”

There are many things about Indian culture that have become stereotypes in our society. The head waggle. The smile and mainstay accent. The Bollywood frenzy. Sacred cows.

But the best parts of Asha make us realize the universal feelings of family. Ravi and Asha argue so much, on-screen and off, because they’re trying to figure out how communicate to one another. Take out the arranged marriages and emotional blackmail, and you get the root cause of every family: individuals who go far (sometimes too far) for each other out of love. If you have a mother, a father, siblings, and extended family, then you can understand both sides of Asha: Ravi’s good-natured exasperation when finding the balance between parental approval and individual choice, and Asha’s biting comments of her son’s career choice and future happiness.

The play was on point when it came to the specific struggles of immigrants and second generation children. Asha symbolizes the best of Indian tradition, but she’s also shown herself as incredibly versatile and adaptable to a strange new world. Ravi is likewise torn between following his own path and reconnecting with his roots. The play asks us: how do you find the balance between family and self-identity? Not the most original question in the world, but the multicultural angle is unique to Canada, and especially to Toronto’s large Indian population. 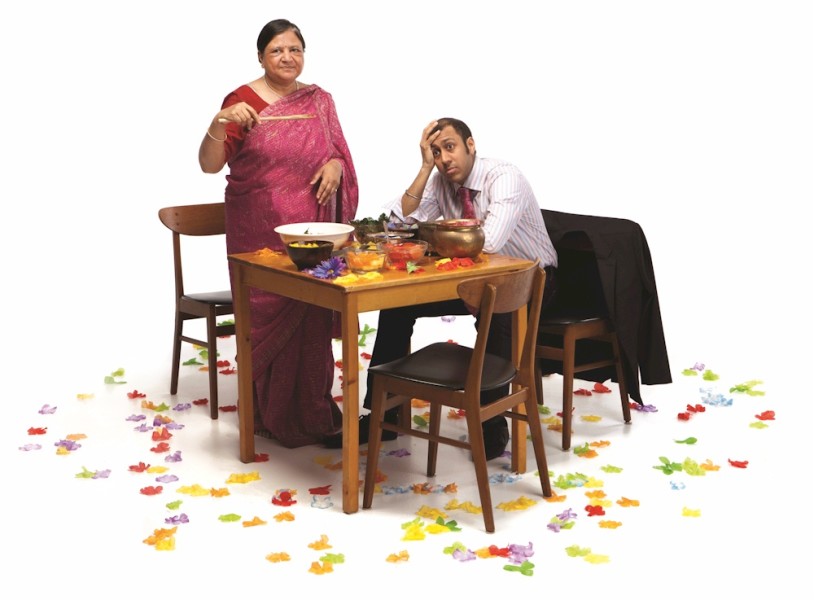 The Non-Performance of a Lifetime

This play is not about chasing after the perfect performance. There are highs; there are lows. It’s a little too long. Asha is the first to let you know that because she’s never been trained in theatre, her mind goes blank sometimes. You just can’t argue with that kind of disarming modesty.

Ravi is genius in his way of casting Asha’s performance in the best light. The way he bobs and weaves in between her interjections is almost like watching improv, but he never lets her stray too far off-course.

Asha wins you over, slowly and charmingly, and makes you want to go make peace with your parents, too.

A Brimful of Asha is part of the PuSh Festival, which runs until February 2, 2014. Advanced tickets here.