Smith may be familiar to viewers for many reasons. The Quebec native played in the CFL from 2007 to 2010, most recently for the Edmonton Eskimos. His next career move was to become the inaugural Bachelor for the show’s Canadian outpost (belated spoiler alert: they broke up). A self-proclaimed goof who is passionate about eating, Smith is now adding his charm to the Food Network in his role as Chopped Canada host.

We sat down with Smith for a talk about how he landed in the Chopped Canada kitchen, what he loves to eat, and why he dreams about fast food burgers.

How did you end up as the host of Chopped Canada?

Brad Smith: It’s such a weird story. I think it’s because people find it weird that I ever got a job on TV after The Bachelor Canada because reality TV can sometimes be a death sentence for a career. I less want to be on TV to have my face [seen by] other people; I love making everybody else in the room laugh, being a goof for them. I loved doing that while shooting The Bachelor.

Then when I got a call from Rogers about doing entertainment [segments] for Breakfast Television Toronto I thought “this is a gift, I get to do this every morning now!” We’d do cooking segments–I didn’t host, but I’d little wait beside them–because I’m a food monster, I’d wait until they were done to rush in to eat the food. Then they started adding time to the segments and they’d wave me in, “Brad, come in here!” I’d run in, eat all the food, and they’d ask me what I thought.

The casting director of Chopped Canada was a Breakfast Television Toronto fan, and asked me if I’d like to come in and audition. I told them I might not be what they were looking for–I think I’m a little too light, even goofy. But I got it, and I said I’m not going to pretend to be [Chopped host] Ted [Allen] or [Chopped Canada‘s first host] Dean [McDermott], I’m going to be myself, and they said that’s what they wanted.

So were you the clown in the room as a kid?

I was the one who couldn’t pay attention. I think I always tried to make people laugh, but I also have trouble with silences. 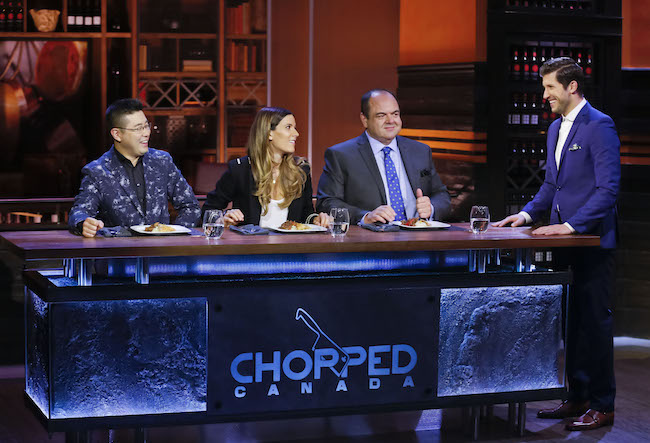 Can we look forward to more moments of the judges or contestants being surprised or delighted by what you say?

[Judge and chef] Michael Smith said to me on the last day “you brought a new life to this. ” By me being very well prepared, and knowing my food knowledge, yet not taking it too seriously and joking around when that opportunity was there, and understanding that I want to make this 16, 17 hour shoot more fun for everyone–it brought [the judges] out a lot more, it made them funnier. You see a lot more of Lynn goofing off–and being serious when she needs to be. The whole show doesn’t need to have this whole dramatic arc that goes there and stays there right away. There are peaks and valleys. There’s a greater depth, more angles and curves. The show’s not about me, though. It’s about the chefs and the judges critiquing the food. I’m there to make the judges feel comfortable and spark conversation, and there to make the chefs feel comfortable and get their food on the plate.

You said you know your food knowledge, and you’re a food monster. Tell me about your connection to food and what food means to you.

I was a fast food junkie forever. Hardcore. We’re talking McDonald’s three times a week. I’ve cut it out now, a few months ago, and that was a conscious choice. Now my body feels better, but I still miss Big Macs, and think about them every night when I go to sleep. I wake up and I think the Hamburglar’s chasing me: “Noooo, but it’s so delicious!”

But I started really cooking in 2009. One year in the CFL, when I could afford to not work in the off season and I lived alone, I actually learned to cook using Michael Smith’s Chef at Home. So it was a thrill to get to meet him. I fell in love with “Triple D” [Diners, Drive-Ins and Dives] and fell in love with Chopped, and Chopped’s “Grill Masters” series.

Food to me is more of an experience, I’ve learned–rather than, being mad that you have to go on a date and go to a restaurant–every since meeting all these amazing chefs, I love going to restaurants now, I love seeing what these chefs can do, I appreciate the art form. The food experience is something you remember.

What’s your most memorable meal in your lifetime?

One was on The Bachelor: At the Victoria courthouse, beautifully lit at night, and we had Albertan beef flown in, steak and potatoes outdoors, with this beautifully setting. The other was in PEI, and we had a day off shooting The Bachelor. I’m an oyster junkie, so we went out in hip waders with a local guy, walked in the ocean in Malpec, PEI, where the best oysters in the world come from, picked them up, shuck them right there, with a bit of lemon. It was incredible, I’ll never forget it.

Those are both very Canadian examples! So what is Canadian food to you?

It’s so hard to define. I think our food will be defined in the next five years. I think there are a couple of people who are really pushing the envelope. I think we are starting to understand that our resource is our food. I think it will be [based on] what comes from our land, more so than anything else. I’m French Canadian, and I’ve had some great poutine, but people who say that’s our best food–I just want to slap them. We have some really great food, it’s just that it’s more rustic, earthy, almost outdoorsy on the plate.

What do you think Chopped Canada is doing for the Canadian food scene?

It’s just showing the fact that our food is on par with anywhere else in the world. I’ve been to Paris, to Barcelona, but the best meals I’ve had are at simple Canadian places that do it right and do it well. We’re showing Canada can compete at any level. And the show competes on a program level, and a production level, and now we have a more handsome and challenging host. (Laughs) Just kidding!

The show does feel a little bit different to me, though, from the U.S. version…

Or is it that everyone is super polite?

I think it is that everyone is super polite! But we do have some episodes this season where people don’t hold back, they show their true colours. 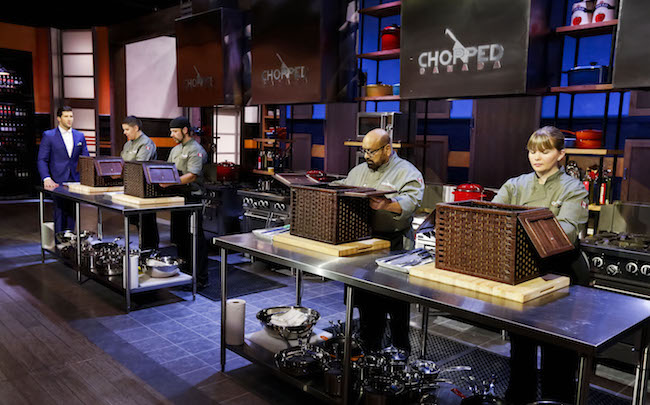 So do you get to taste everything?

During re-sets, I get to eat what the judges leave behind.

Oh yeah. Mark [McEwan], Lynn [Crawford], Antonio [Park], and Eden [Grinshpan] have similar palates to me. I can watch them while they’re eating, and watch their faces, and Eden will give me a look, and I know I’m going to like it.

And the fourth plate is for photographing, right?

Right. I made the mistake of eating the fourth plate once. I was yelled at. That was day one.

What’s it like stepping in a host of a show that has an established host in the U.S. and a prior host in Canada?

I never look at it as better, worse, different. I’m there because I’m there to be myself. It’s Chopped, you’re going to get all you want and need out of the show. Ted is the standard. The good thing about me is that I’m Ted’s polar opposite. For me I’m here to have fun, and to make people laugh.

What have you learned about cooking from watching the chefs cook and the judges’ critiques?

The most I’ve learned is from listening to the critiques. Especially the first few days, I absorbed everything they said, and then I could further it with my own knowledge of cooking. I haven’t put much into practice because I’ve been going to so many restaurants. Being around the ten best chefs in Canada everyday it just becomes easy to absorb everything. My girlfriend makes fun of me because, like [judge] Susur [Lee], I always notice when there’s acid missing.

What’s your take on the Vancouver food scene?

I love it! Vancouver has that sense of high class while keeping a good sense of simple food. It’s really good, and some of the best Asian food in the world.

After “Triple D” aired, I had to go find the hand-pulled Shanghai noodles guy [at Peaceful]. But when I come to Vancouver I like to let locals decide where to take me. Last time I went to Minami in Yaletown, and they made a seafood dish that was stunning.

Chopped Canada airs Saturday nights on the Food Network. This interview has been edited and condensed.