Two kittens were left outside in a taped box outside a Surrey animal shelter during last week’s subzero weather.

A Surrey Animal Resource Centre staff member who arrived early in the morning at 6:30 a.m. on Sunday, November 30 found two very cold and hungry kittens inside the box. Temperatures that night reached -15°C, warming up to -9°C in the morning after sunrise.

“This is NOT OKAY! These are living beings who were scared and cold and could have frozen to death – this is no way to treat any animal,” a staff-person wrote on the shelter’s Facebook.

“Please, if ever you find yourself in a situation where you are unable to keep your pets, DON’T tape them up in a box and leave them outside in the cold It could easily have been too late for these little guys. Right now they are tucked into a warm crate eating good food, but we shudder to think of what we might have found in that box instead.”

In recent years, Surrey has experienced a stray and feral cat population explosion with as many as 20,000 stray cats in the municipality alone, according to the Vancouver Orphan Kitten Rescue Association. On their own, these animals live short and difficult lives as they are killed by coyotes, vehicles and illness.

The Surrey shelter is pleading the public to spay/neuter their cats and keep them safely indoors so that they do not end up with unwanted kittens. It also says that all of its cats are neutered, tattooed and microchipped before adoption. 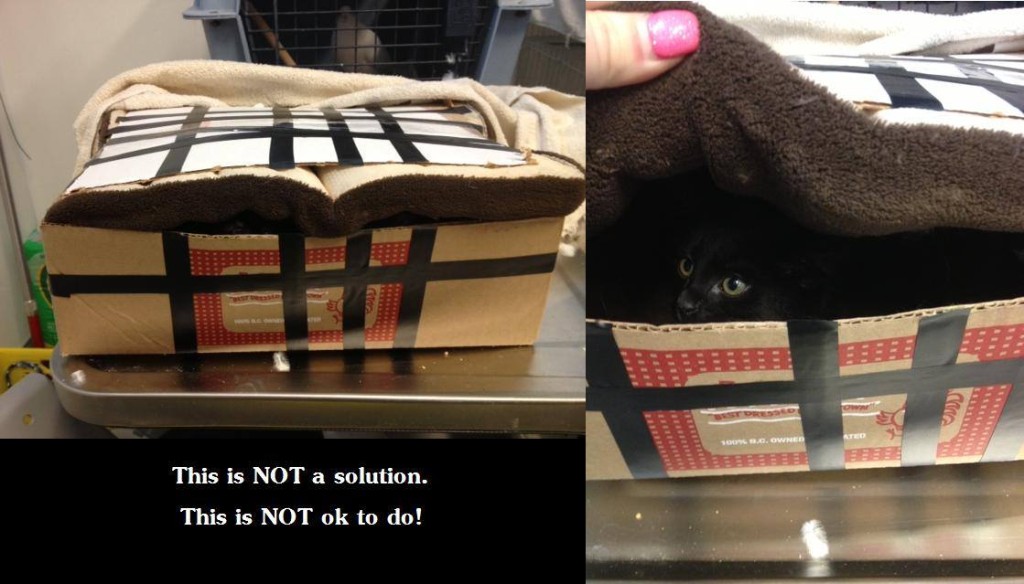