“The American Dream” is a term synonymous with immigrants migrating to North America, looking for a successful life through motivation and perserverence. Everybody has their own personal definitions, and personal degrees of satisfaction. It is no different for us here in Canada, especially Vancouver, a symbol of multicultural diversity with endless stories to tell. Many of us have been part of, or have family a generation or two separated that arrived as immigrants into a foreign country, seemingly having to begin life anew and building life from the ground up.

Then there is Leo Frincu, a former Romanian national, and world wrestling champion. Through a path less traveled, Frincu defected to America in 1994 at the expense of potential Olympic appearances and legal troubles in his native country. Frincu’s difficulties did not stop at the end of his Olympic Dream, but through financial and emotional hardship. Through it all, he has turned his hard work and undying dedication into a successful personal training business, where he regularly works with world class athletes. Now, Frincu tells his life story to date. Choosing Freedom: A Journey of Determination, Setting Goals and Achieving Success is the title of Frincu’s autobiography, detailing a self-made journey from a past seemingly pulled from the pages of a history book to now.

Frincu’s book begins around a grey and grim upbringing in 1970s and 1980s communist Romania, where he paints a picture of the drab environments under Nicolae and Elena Caucescu’s longtime reign over the country, and tells a tale of a young child unhappy with his surroundings and seeking escape, something he knew by thought, not action, or execution. Escape not just from rough school system and restrictive environments, or emotional detachments from his mother, but from the simplicity of his life in general, craving more challenge. The escape is found through wrestling, where Frincu thrives from a young age and eventually becomes one of the world’s elite, something he willfully gives up to come to America and leave those dreams behind.

Throughout this journey, Frincu reminds us about the things we often take for granted that was virtual non-existent growing up in Romania, such as his glee at finding his first bottle of Coca Cola in Turkey as a young teenager, or the amazement one would have when something from the Western World made its way into Romania for he and his friends to see. 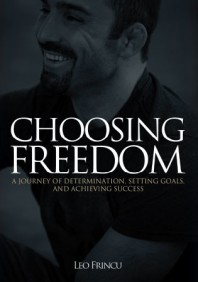 Perhaps the most gripping impact this book has is when you realize the period of time everything in Frincu’s book was written. What could come off as, and easily sounds like something written for our history books took place in many of our lifetimes. It hits you as Frincu details the events of his life the day the Romanian revolt occurred in 1989 leading to the Caucescus being overthrown and executed. Adding to that jarring fact is knowing that at the time the story was published, Frincu was only 36 years old.

One of the most interesting aspects of the book itself isn’t in the words written, but the fact that no ghostwriter is mentioned (as often happens with autobiographies of this sort,) adding more personal impact behind the words written. At no point does the book become preachy, nor does Frincu ever deviate from anything but an inspirational message.  Frincu never paints himself as a victim of circumstance, or one who appears as better than anybody else because of what he has been through. He is always the one-time busboy who worked so far away from his home that he would sleep in a restaurant booth. He is the uncertain risk taker who closed his eyes and leapt in over his head, digging himself out and making a successful life for himself. He is always, quite simply put, Leo.

Frincu is now a high energy trainer for athletes of all sports. However, may be best known recently for his continued work with UFC women’s Bantamweight Champion Ronda Rousey.  While Rousey is his highest profile trainee, he works regularly with other MMA and Jiu Jitsu fighters, and has personally trained athletes of all other sports.

While the book itself progresses at a rapid pace once Frincu gets to where he has set up his personal business, the message beforehand sticks with you. The grit, determination and his yearn for “escape” make Choosing Freedom a must-read for those of us doing everything from chasing uncertain dreams, to wanting to learn more about upbringing (and uprising) of communist Europe in the 1980s.  Frincu’s book offers that light at the end of uncertain tunnel coming from somebody who has been through it all before.  Frincu is in essence the proverbial phoenix rising from the ashes.  It’s a near 200 page message anybody needing that bit of inspiration or drive should read.